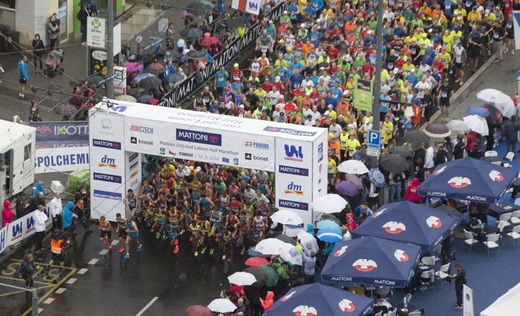 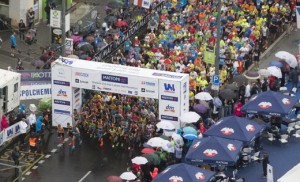 The Kenyan talents of Peres Jepchirchir and Daniel Chebii will complete a busy week when they line up at the Mattoni Usti nad Labem Half Marathon on Saturday. Fresh from their triumphs in the Birell Prague Grand Prix 10k the week before, where Jepchirchir ran the fastest women’s 10k of the year with 30:55 and Chebii beat a high quality men’s field in 27:42, they turn their attentions to the seventh and final race in the RunCzech series for 2015. The fifth edition of the Usti nad Labem Half Marathon is an IAAF Gold Label event, the highest category of road race.

Having run so impressively in the Czech capital, much will be expected of Peres Jepchirchir with her best for the half marathon of 69:12. Her rivals include the experienced Caroline Kilel, winner of the 2011 Boston Marathon. The Kenyan has proven ability at the shorter distance, finishing fourth at the World Half Marathon Championships in 2009. Also coming into the reckoning should be another rising young Kenyan star alongside Peres Jepchirchir: Linah Cheruto finished over a minute adrift as runner-up to her compatriot in Prague last week but has solid half marathon credentials with 70:22. Leading the Ethiopian challenge will be Shitaye Eshete in only her second race after maternity – she finished a solid fourth in Prague a week ago and this will be her debut at the distance. Another contender from the same country is Amane Beriso, not at her best last week but with a 68:43 half marathon to her credit.

Daniel Chebii remarked after his 10k victory last weekend that he was “only 70% fit” after spending much of 2014 on the injured list. His rivals in Usti will recognise his talent only too well: Gilbert Masai finished three seconds behind Chebii’s winning time of 27:42 over 10k and their personal bests for the half marathon are comparable, although Daniel Chebii might claim home ground advantage of a kind, since his 59:49 was set in winning another of the RunCzech series events, the Mattoni Ceske Budejovice Half Marathon in 2012, while Gilbert Masai ran his fastest of 59:57 to finish fifth in Lille the same year.

It’s another Masai who is the fastest overall going into the race: Titus Masai, who didn’t show his best form over 10k last week in Prague but ran 59:41 for third place in the Rome Half Marathon last year. Elijah Tirop is another to take into the reckoning, having won another of the regional RunCzech events, the Mattoni Karlovy Vary Half Marathon, in late May. But Daniel Chebii is entitled to be confident and knows the course, having finished sixth here in 62:33 two years ago: “If I can break my best of 59:49, I know I am primed for a marathon debut either later this year or next.”

The men’s course record stands at 60:38, set by Philemon Limo in 2013. Reflecting on her development, Peres Chepchirchir acknowledges the value of training in the same group as Mary Keitany in Iten in Kenya. Peres credits the African record holder in the marathon and 2009 World Half Marathon champion with passing on important principles:
“I learned the importance from her of hard work and also when to rest. It’s boosted my confidence just to know I can train alongside her.”

With her half marathon best of 69:12, Peres Jepchirchir should be in the vanguard as the women’s field attack the 69 minute barrier. The current women’s event record is 69:08, set by another Kenyan, Josephine Chepkoech, in 2013.

Leading Runners and their personal bests:

The Mattoni Usti nad Labem Half Marathon will be streamed live from 1245 GMT / 1445 CET on Saturday, September 12. The race begins at 1300 GMT / 1500 CET with live commentary. To watch the live stream, go to www.maraton.sport.cz and click on icon for English.