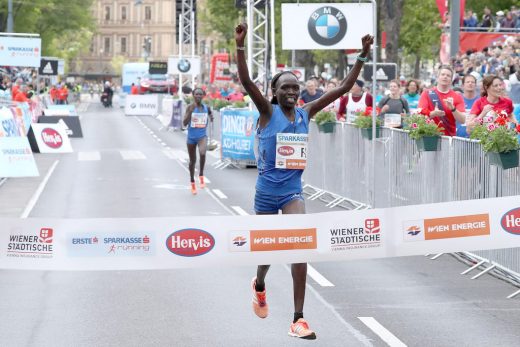 Despite the unfavourable weather conditions with strong winds, Nancy Kiprop clocked the second fastest time ever in the history of the Vienna City Marathon. She won with 2:24:20 after battling with fellow-Kenyan Rebecca Chesir. With around 400 metres to go Kiprop moved ahead. Chesir was second in 2:24:25 and Ethiopia’s Roza Dereje took third with 2:25:17. Defending champion Shuko Genemo of Ethiopia finished fourth in 2:26:06.

With high winds it soon became obvious that this would not be the day for record attempts. But instead, two very competitive races developed. In fact, never before has the Vienna City Marathon seen two such thrilling finishes in one race.

A group of 15 runners passed the halfway mark in 64:13 minutes. There were still three pacemakers in front of the group, trying to protect the other athletes from the wind. With winds projected to reach up to 60 kilometres per hour any result below 2:10 should have been regarded as an extraordinary achievement.

But somehow the wind calmed down when the men ran the last 12 k. While there was still a group of twelve runners plus one pacemaker at 30 k (1:31:38) the picture changed rapidly very soon after passing that point. Suddenly only seven runners were left in the first group, then three broke away around the 35 k mark: Ishmael Bushendich, Albert Korir and Suleiman Simotwo made the race for victory an all-Kenyan affair. Deribe Robi of Ethiopia, one of the pre-race favourites, had lost contact while Kenya’s Eliud Kiptanui, who was the fastest on the start list with 2:05:21, dropped out at this late stage of the race.

At 36 k Simotwo could not hold on. He dropped back, later finishing fifth with 2:10:36. Bushendich and Korir ran shoulder to shoulder until they could see the finish line. In a thrilling sprint finish, Korir was ahead, improving his personal best from 2:10:08 to 2:08:40. „It was cold and windy, but it was a great day for me,“ said 23-year-old Korir, who celebrated his biggest career win in Vienna.

The women’s leading group contained six runners when they reached half way in 1:12:36. Ethiopians Shuko Genemo, Meseret Mengistu and Roza Dereje faced three Kenyans: Debutant Angela Tanui, Nancy Kiprop and Rebecca Chesir. It was then Mengistu, who was the fastest runner on the start list with 2:23:26, who fell off the pace. Having suffered from a foot problem during her training for Vienna she later dropped out. Genemo and Tanui also struggled. At 30K (1:42:23) Dereje, Chesir and Kiprop were left in the lead. But it was not an Ethiopian day for the women in Vienna as well. Dereje held on until 39K, but then had to settle for third. Kiprop and Chesir produced a great fight for victory. 337-year-oldKiprop secured her biggest career win. „It was very windy and it was getting really close at the end. This was my greatest victory,“ said Nancy Kiprop.

A new 10 k event on the eve of the Vienna City Marathon saw Austrian champions crowned at this distance: Andreas Vojta and Andrea Mayr took the honours on the city centre course with times of 29:54 and 34:57 respectively. Estonia’s triplets Lily, Leila and Liina Luik participated in the race as the only invited international runners. Leila was the fastest of the trio with a time of 36:19 while her sisters followed shortly behind. Around 1,500 runners took part and ran into the same finish where the marathon will conclude on Sunday. Organizers plan to further develop this 10 k race in the future.