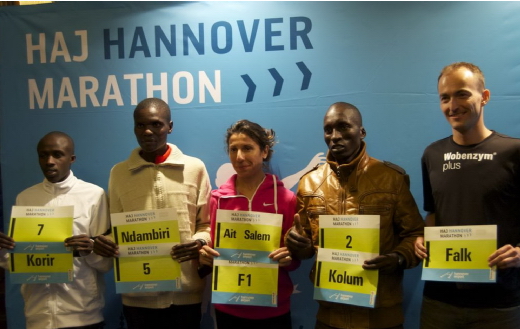 The jubilee edition of the HAJ Hannover Marathon will be boosted by the strongest elite entry in the history of the event. Six Kenyan men are on the start list with personal bests of sub 2:08 for the 25th edition of the race. Among them are Benjamin Kolum, who won the Paris Marathon in 2011 with 2:06:31, and Josphat Ndambiri. He took the Fukuoka Marathon in the same year with 2:07:36. The defending champion Souad Ait Salem of Algeria is the favourite in the women’s race again. She is the fastest on the start list with a personal best of 2:25:08. The HAJ Hannover Marathon is an IAAF Silver Label Road Race. Adding other running events staged parallel on Sunday a record number of 19,000 athletes have so far registered.

On a very flat course organisers hope for a course record in the men’s race on Sunday. It was two year’s ago when South Africa’s Lusapho April clocked 2:08:32 in Hannover. This is the mark that is targeted. With a currently good weather forecast though perhaps some wind pacemakers will be instructed to guide the first group to a 63:30 half marathon split time.

While Kolum and Ndambiri have won two major marathons there are four other fellow-Kenyans who belong to the group of favourites in Hannover. Augustine Ronoh has a personal best of 2:07:23 from a third place in Hamburg in 2012 while Cheshari Jacob was fourth in Frankfurt one and a half years ago with 2:07:46. Elite race coordinator Christoph Kopp has a habbit of handing out bib number 7 to an athlete he expects to do well or to cause an upset. In Hannover he has handed this number to 24 year-old Ronald Korir. He was a pacemaker in last year’s Frankfurt Marathon. Leading beyond the 30 k point Korir stayed in the race and finished fourth with 2:07:46. The fastest man in the field is Mariko Kipchumba. The Kenyan clocked a PB of 2:06:05 when he won the Reims Marathon in 2012. Although he is 40 years old Kipchumba is still going strong. A year ago he won the Xiamen Marathon with 2:08:06.

An Ethiopian challenge could come from Chala Bekele, who improved to 2:10:28 earlier this year in Marrakech, and late entry Gezahegn Hunde. Hunde competed in last Sunday’s Rotterdam Marathon but dropped out early after problems. He looked for a second opportunity and got this in Hannover. Falk Cierpinski carries national hopes in the HAJ Hannover Marathon. The son of double Olympic Marathon Champion Waldemar Cierpinski (1976 and 1980) has a PB of 2:13:30 from 2008.

“When I ran here in Hannover last year I suffered of a foot problem from 30 k onwards. This time I want to show what I am capable of – I want to win the race again but achieve a better time,” said defending champion Souad Ait Salem who clocked 2:33:09 a year ago. The 36 year-old Algerian hopes to go for 2:28:00. “I like Hannover’s flat course and the atmosphere was great, that also made me come back,” said Souad Ait Salem, who does not do any high altitude training. “High altitude does not work for me. So I always train in Algier.” Next year she intends to run the Rio Olympic marathon. Reaching the national qualifying time is no real hurdle for her since the federation only requests a time of 2:44:00.

While Germany’s Lisa Hahner had to withdraw because of a stress fracture Ukraine’s Olha Kotovska looks to be the main rival for Souad Ait Salem. She won last year’s Rennes Marathon improving to 2:28:47. Earlier this year Kotovska took the Granollers Half Marathon with 1:13:21. Kenyan debutant Maryanne Wanjiru, who won the Paderborn half marathon two weeks ago with 1:11:12, could also do well.

More information about the HAJ Marathon Hannover is available online at: www.marathon-hannover.de