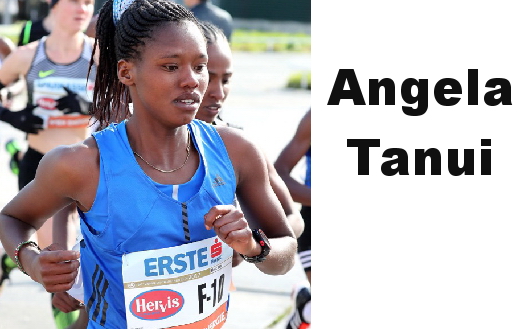 A strong contingent of Ethiopian runners will make their way across the Atlantic to compete in this year’s Scotiabank Toronto Waterfront Marathon and so it falls upon Angela Tanui to be the Kenyan ‘flag bearer’ at this IAAF Gold Label race.

Tanui will not shy from the important role she finds herself in when she toes the line October 22nd. The rivalry between the East African neighbours is legendary and longstanding, particularly in Toronto. Ethiopian women have been victorious here seven of the last ten years. But as an indication of how close the rivalry is, the Course and Canadian All-comers Women’s record is 2:22:43, held jointly by Sharon Cherop KEN (2010) and Koren Jelala Yal ETH (2011) who ran identical times.

“Off course, yes, as a Kenyan I always want to make Kenya proud of me,” the 25-year-old Tanui says of the matter.

Best known for her success at the shorter distances – last year she set personal bests of 31:26 in the 10k and a stunning 1:07:16 for the half marathon – she made her marathon debut earlier this year with a clocking of 2:26:31 at the Vienna Marathon. That was good enough for 5th place. She admits learning much from her experience.

“I learnt that the marathon is a calculation race which needs a smart mind,” she reveals. “I have increased the mileage per week and have planned an extra-long run (35 kilometres) compared to the last marathon preparation.

“My expectation is to run a personal best. With the debut in Vienna I am confident I learned a lot and can really improve. Í can’t tell (by how much) but that is my inner prayer. Of course, the training was tougher and I will arrive much better prepared for this event in Toronto.”

Tanui is from a large family in Uasin-Gishu county, around 60 kilometres from Iten, where she is living and training. She has two brothers and four sisters one of whom, Euliter, is also runner and lives with her in Iten. Tanui’s boyfriend, Elijah Tirop, with whom she also shares her home, will accompany her to Toronto as he will perform pacemaking duties for the elite men.

Among her training partners are a trio of past Toronto racers, Ishhimael Chemtan (2015 men’s champion), Rebecca Chesir (3rd in 2016) and Sharon Cherop (2010 winner).  They are all represented by Demadonna Athletic Promotions, an Italian sports agency.

“I spoke of the race with them and they told me that it is a non-predictable race which varies according to the weather conditions,” she says of her reconnaissance.

Although she spends much of her time training and recovering, Tanui enjoys relaxing while watching Nigerian movies. And like many of her compatriots and training partners, she is also a football fan.

“I am a fan and supporter of Manchester United and my favourite player is (Javier) Chicharito (Hernandez) even if he is not playing for Manchester this year,” she adds.

Although she is just 25 years old and conceivably has another five to ten years of running in her she has already had thoughts of what life might look like upon retirement.

“Í would like to be a coach,” she says. “I’m accumulating a lot of experience in the field and would like one day to share my knowledge with the young runners of my village in order to give them the opportunity to improve their lifestyle and have an income from this activity.”

The future is certainly bright and she is only just beginning her marathon career. Suddenly, though she must carry the honour of her nation on the world stage. The question remains whether she can unsettle the Ethiopians on the streets of Toronto and carve out a victory. Her countrymen will be watching.