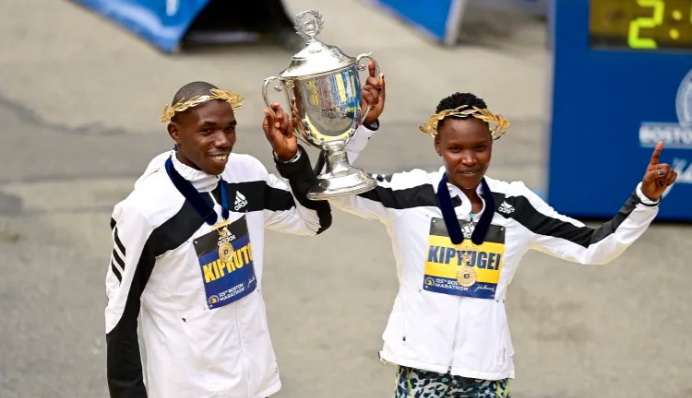 Kenyans Benson Kipruto and Diana Kipyogei won the Boston Marathon – the first Boston to run in October in its 125-year history.

Kipruto stayed with the lead pack sharing the lead for some time, before dropping the pace with 5K to go, leaving the rest of the field to fight it out for second and third positions.

Diana Kipyogei of Kenya won the Boston Marathon on Monday, finishing in 2:24:45. This was the 27-year-old’s first victory in a major marathon. https://t.co/dRrrKXeZQk pic.twitter.com/BUeXrISfgO

In the women’s race Kipyogei, however, led for much of the way and cruised in for the victory, having something left in the tank.

Kenyan Edna Kiplagat clocked a second-place finish in 2:25:09, while the third-place finisher was Mary Ngugi in 2:25:20 for the Kenyan sweep.

The 30-year-old Kipruto is known for his Prague and Athens wins. His personal best time is 2:05:13 from the 2019 running of the Toronto Marathon.

In November 2020, the 27-year-old Kipyogei ran the Istanbul Marathon clocking her lifetime best of 2:22:06.

The race was moved from April to October due to the coronavirus pandemic. The 2020 event did not happen but a virtual version was offered.