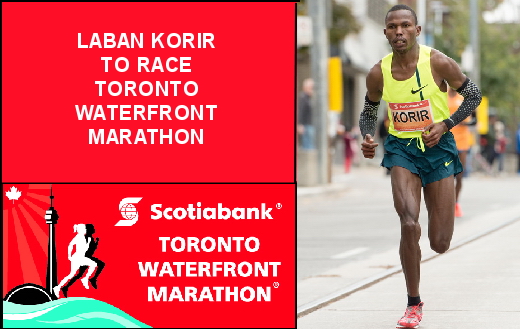 Laban Korir will return to the Scotiabank Toronto Waterfront Marathon October 18th to defend his 2014 title and, if the conditions are right, to tackle the course record.

The 29 year old Kenyan surprised everyone, himself included, when he ran away from the field a year ago to claim victory in 2:08:15 under very chilly conditions. With a personal best of 2:06:05 from the 2011 Amsterdam Marathon, Korir is a quality marathon runner and an early favourite to win this year’s event.

The Scotiabank Toronto Waterfront Marathon has been awarded IAAF Gold Label status for 2015, an enormous honour for the race organizers.

“First I want thank the organizers for inviting me again to Toronto,” Korir said from his training base in Kaptagat, high up in the Rift Valley. “This year I’m there to defend. At the moment I’m ok and the body is responding very well. If everything goes well, as it is at the moment, and the weather will be ok, not like last year, I will come for the course record.”

That record is Derissa Chimsa’s (Ethiopia) 2:07:05 from 2013. Race Director Alan Brookes is offering a course record bonus of C$35,000 for a new record as well as an additional C$5,000 for beating the Canadian All-Comers record of 2:06:54 which was set by Ethiopia’s Yemane Tsegay at the 2014 Scotiabank Ottawa Marathon.

Korir is part of the Global Sports Communications training camp in Kaptagat which includes fellow Kenyans Eliud Kipchoge, winner of the 2015 London and 2014 Chicago marathons, and Geoffrey Kamworor, the 2014 IAAF World Cross Country Champion. Another notable name in the group is Uganda’s Stephen Kiprotich, the 2012 Olympic marathon champion.

Training up to 200 kilometres a week with this talented group has provided huge motivation for Korir to rise to the very top of elite marathoners.

“Eliud has inspired me a lot,” Korir admits. “He is my role model. He used to teach us many things on how to succeed in life and also how to train. He is a legend, by the way. After training sessions we meet at the camp and have lunch or tea and discuss how the session went.

“My major goal in my career is to run (a marathon in) 2:05 and follow the footsteps of top guys in Kenya like Eliud and the rest,” he reveals.

Earlier this year Korir ran 2:07:54 to finish 6th in the Paris Marathon then, following a comfortable recovery period has begun his buildup for Toronto. He has fond memories of his visit last year.

“According to my manager and my coach, to stay longer in this career you need a good plan. Two marathons a year is ok for an athlete’s future,” Korir explains.

“I chose Toronto this year because I need to defend my title. I also like the fun people of Toronto, they are so cheerful. What I enjoyed last year was the course and also the cheering. What I still remember is the great finish and jumping into that guy at the finishing line.”

A representative of Toronto’s East African community handed the athletes national flags as they crossed the line and Korir leaped into his arms in a show of jubilation. Also at the finish line were members of the Kenyan High Commission who celebrated Korir’s victory. After the race Korir joined fellow Kenyans and Ethiopians at an Ethiopian restaurant for a post-race dinner which has become a tradition at the Toronto Waterfront race.

Like his compatriots Korir has used prize money from races – he earned $20,000 for the victory in Toronto last year – to buy land on which to grow produce for his family and to take to market. When he is not training or resting between sessions he enjoys time at home with his family.

“Life in Kenya is great,” Korir reveals. “After training I like resting and watching Nigerian movies like ‘2 Rats’. They are funny guys from Nigeria.

“I sell my products – maize and tea – to factories in Kenya. I sell some of it at the market and the rest is for my family. For now I have no other business. Maybe in the future after the running career I will.”

Race Director Alan Brookes has already announced that two time Canadian Olympian Eric Gillis who ran a personal best of 2:11:21 last year in Toronto, will return October 18th marking his fifth appearance at the race. In addition to the IAAF Gold Label status this year’s Scotiabank Toronto Waterfront Marathon will serve as the Canadian Marathon Championship.