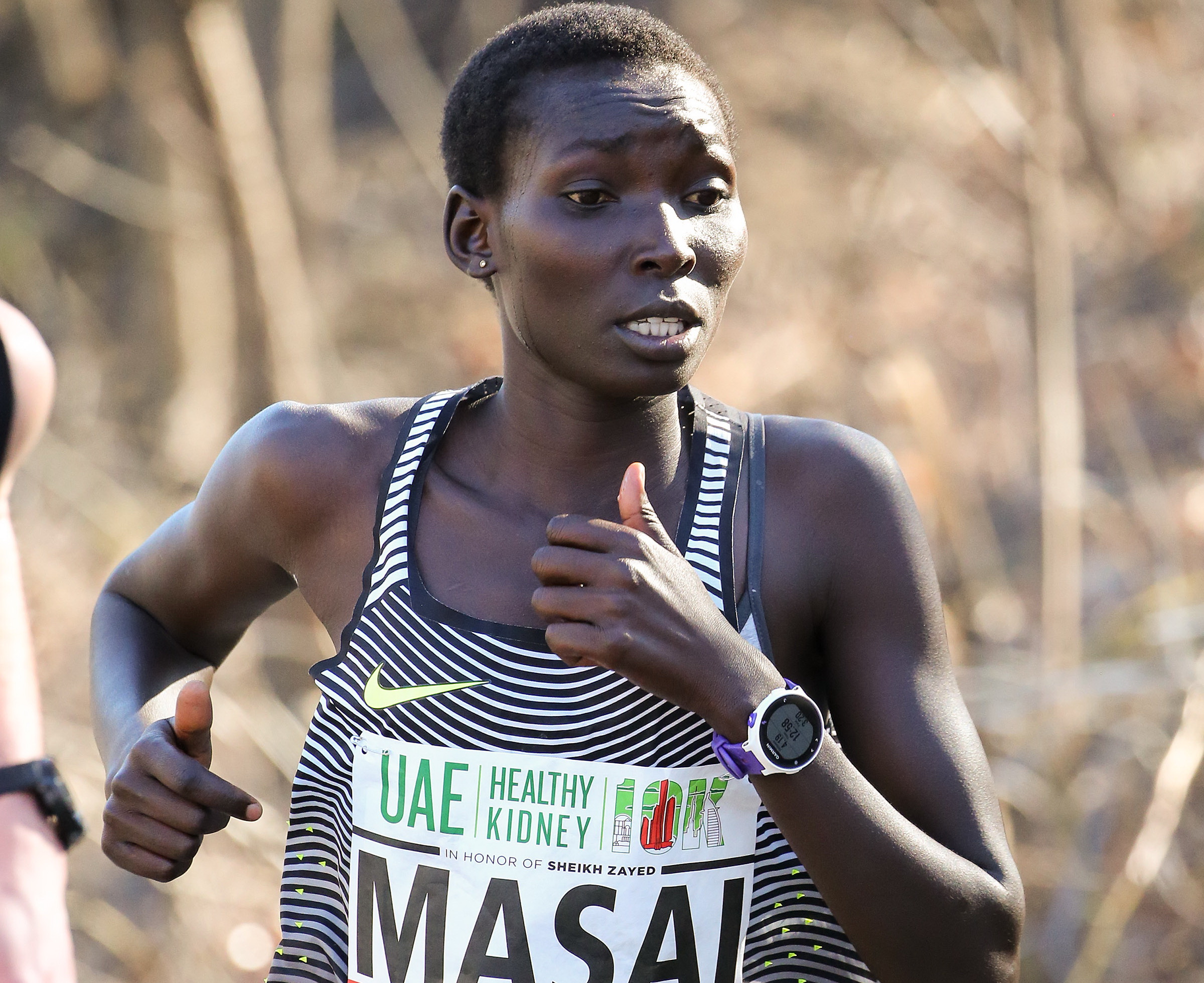 Magdalyne Masai’s performance at the Hamburg Marathon April 28th earned her praise from around the world given that she had run a personal best of 2:26:04 and finished second in the highly competitive race.

Moreover, it earned her an invitation to this year’s Scotiabank Toronto Waterfront Marathon, October 20th which is, for the fifth consecutive year, a prestigious IAAF Gold Label event.

She will arrive in Canada’s largest city privy to useful knowledge of the city and the race as her husband, Jake Robertson of New Zealand, finished 5th here a year ago.

“I want to get a personal best and finish in the top three,” she declares during a video call from her home in Iten, Kenya.  “That is my aim. I want to be in top three. I think 2:23 or 2:22 is within reach.”

That would challenge the ‘family record’ held by her elder sister, Linet Masai, who ran 2:23:46 In her debut last year in Amsterdam.

‘Magz’, as she is affectionately known, comes from a family of runners. Linet was the 2009 world 10,000m champion while the eldest of the 10 Masai kids, Moses Masai, was the 10,000m bronze medalist at those same championships in Berlin. Another brother, Dennis Masai, won the 2010 World Junior Championships in Moncton, New Brunswick.  A younger brother, Alex Masai, is currently running for Hofstra University in New York State.

It’s not difficult to see where her influences came from as she grew up in the Rift Valley of western Kenya where the altitude is roughly 2,500m above sea level.

“We moved a lot,” she says of her upbringing. “I was born in Mt. Elgon forest. After some point, we moved to Kapsogom. Currently, my parents are in Trans Nzoia district.

“I met Jake in Iten because my sister Linet was staying in Iten. I had come to start training in Iten as well and was staying with her.”

Robertson and his twin brother, Zane, had arrived in Kenya as teenagers fresh out of high school. Their intention was to live and train like the Kenyan runners they admired. He and Magdalyne fell in love and, after a six-year relationship, he famously proposed at the finish line of the 2017 Great North Run. Moments before, he had finished 2nd to Olympic champion Mo Farah and Magdalyne had finished 4th in the elite women’s race.

On bended knee in front of thousands of spectators, and with the public address announcer hovering over him, he asked for her hand in marriage. The spectacle caught her by surprise.

“I had no idea,” she says laughing at the memory. “Not at all. I was excited about the proposal, but I don’t like big crowds so I kind of had mixed emotions. I am shy a little bit.”

Jake, who ran 2:09:52 at Scotiabank Toronto Waterfront, is a Toronto Raptors fan and attended one of their home games a few days before the race. His experience reflected positively on his wife.

“Jake told me Toronto has a great organization,” she declares. “He loves the city. He loves Toronto. And I am also a big fan of Raptors. I watched all the final games against Golden State.”

In her preparation for Toronto, she trains with other Kenyan women and some male pacemakers employed by DeMadonna Athletic Promotions and not, as one might think, with her husband.

“I do run with him sometimes but, you know, even when he says he is going easy that is not easy for me. It is more than medium for me,” Masai explains again, laughing.  “We only have run together on a few occasions.

“My manager, Gianni Demadonna, has a good ladies training group, I would say amongst the best in Kenya. We have eleven ladies (including Sharon Cherop, 2010 Toronto Waterfront winner) in my group and about six pacemakers. We only meet twice in a week because we do sessions on Tuesday and Friday. Friday is either a long run or long intervals on the road.”

“Honestly, when I showed up for my debut, I think I was ready to do more than 2:28,” she reveals. “But the race didn’t go as I planned.

“I was very pleased about the result I had – with a very small preparation – for Hamburg, so that result was very good for me. I had a couple of small injuries along the way, so I had to scrap a couple of sessions.”

As she builds towards Scotiabank Toronto Waterfront Masai has to think carefully when asked what sort of training volume she endures in a week. It’s not something she focuses on. The answer is between 130 and 160km she concludes.

So far in my training not only am I looking at time but also how I am feeling,” she explains.  “Mostly I judge myself when we do long intervals on the roads. We run 4km at about 3:30 (per kilometre) pace. Then for one kilometre easier at 4:00 pace. We do that five times. If I finish that feeling like I can continue that’s when I know I am feeling good and ready to go.”

The Robertsons are building housing for foreign athletes to reside in while training in Iten. That project is nearing completion. Jake is presently in Holland seeking treatment for a nagging injury but when they are both home, they enjoy their time together.

“I like watching football,” says Masai, who admits she is a Manchester United supporter, “and then mostly on the weekend we get away from Iten to refresh our minds before the beginning of the week. There is a place called Sego, it is down the valley. If you follow Jake on Instagram, you will see his posts.  It looks like something in National Geographic.”

Magdalyne Masai may not have the fastest time among the elite women who will toe the line on October 20th, but she certainly will be prepared to run with the leaders. And nobody could be prouder than Jake Robertson if she achieves her goal of a top-three finish.