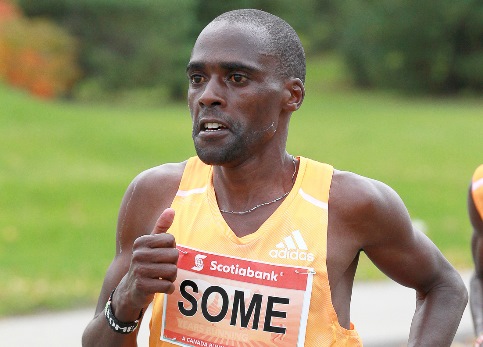 A year ago Peter Some found himself at the front thirty kilometres into the Scotiabank Toronto Waterfront Marathon battling the cold and windy elements. Confident and empowered by the appearance of his rivals the Kenyan pushed on expecting to win the race.

But within the next two kilometres his compatriot Laban Korir appeared on his shoulder and then went on to a surprise victory in 2:08:15.

Some faded to 6th place in a time of 2:10:07. Despite being in top shape he left Canada’s largest city very disappointed with his performance vowing to learn from the experience.

The 25 year old will have his chance at revenge as the pair will renew their rivalry at this year’s event October 18. The Toronto event will be, for the first time, an IAAF Gold Label race.

“Like last year, my fitness is very good,” Some reports from his training camp in Kenya. “Last year I was pushing too early. I am more experienced now and hope to be better.

“I felt very good and decided to push it. Later on I realized that it was too early. I was disappointed that I lost. I don’t care who was beating me I just wanted to win myself.”

Some has a terrific personal best of 2:05:38 from the 2013 Paris Marathon making him the fastest man in the elite field in Toronto. And any man who can keep up in training with world record holder Dennis Kimetto and Geoffrey Mutai, a Boston and New York winner, is himself a talented athlete.

He comes by his gift honestly, after all, he is the son of the great Some Muge the man credited with starting the Kenyan dominance at the 1983 IAAF World Cross Country Championships in Gateshead, UK. There he earned the bronze medal the country’s first individual medal in cross country. Though he died when Some was a child, the son remembers he and his brothers being encouraged to be a runner also.

“Unfortunately, my dad passed away when I was eight years old. My mother encouraged me to run and she always watched and inspired me when I was running in training or races.”

Inspiration these days comes closer to home. Some and his wife have a two year old daughter named Sheerlen Jebet and he runs to ensure a bright future for his family. The winner’s prize in Toronto is $20,000. Again, he also has his eyes on Deressa Chimsa’s course record of 2:07:05 and the accompanying $35,000 bonus that comes with it.

Until this week Chimsa had been expecting to run also but an injury has hampered his preparations and he withdrew at the beginning of the week. Some knows the field will be strong, nonetheless.

“Like in past years Toronto always has some great athletes running,” Some says of the field he will face. “I hope we can work together and do something special. I was happy with the 2:07:22 I ran in Tokyo (February 22, 2015). I tried my best and hope to improve now in Toronto.”

The Kenyan star, when he is not training or caring for his family enjoys following Manchester United Football Club with England International and club captain Wayne Rooney his favourite player. This is something he had just learned he has in common with Toronto Race Director, Alan Brookes.

“Yes, I have watched them play and I am happy with most of their performances,” Some says.

“I did not know (Brookes was also a fan). But it’s great that we share this. I watch the games mostly at home or in the training camp with my friends and training mates.”

Preparations for Toronto have been going as well as expected and he has interrupted his buildup only once and that was to race the Chemususu Dam Half Marathon in Kenya two weeks ago. He finished 3rd in a strong field that included other leading Kenyans preparing for a fall marathon. Now he begin the tail off in mileage to ensure he is primed and fit for the battle with Korir as well as an outstanding support cast – any of whom could be dangerous on the day.

For a man who has seen much of the world he admits that he takes his meals in the hotel and rarely ventures outside except for press functions and to race.

“I like traveling, but when I am traveling for a marathon, there is no time to see the city. When my career is over I hope I can visit Toronto again to do some sightseeing,” he offers.

“We eat at the hotel and did not do any visits. I liked the Toronto marathon, that why I am happy to be back again.”

Of course he will be much happier if he can cross the finish line first on October 18th.