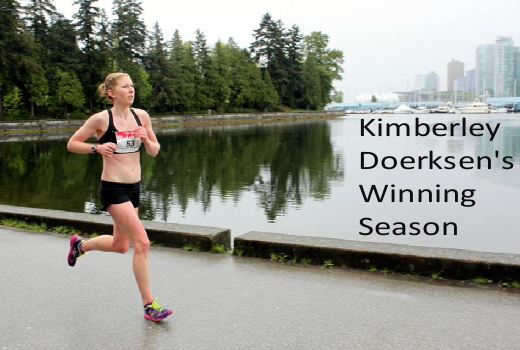 Kimberley Doerksen of Gibsons, BC ran the 2014 BMO Vancouver Marathon Sunday, May 4th with the intention of running “sub-2:40”. She ran 2:37:00 and won the race. Although it wasn’t her debut marathon, it was her debut competitive marathon. “I’ve done two before (NAIA Nationals with SFU in 2011 and the Boston Marathon in 2012). But this was my first marathon that I’ve raced “competitively” and completely healthy. So I would consider this my “debut” even if it technically isn’t, she said.”

Doerksen ran 3:29:33 at the 2012 Boston Marathon. Her 2:37:00 is just two minutes off qualifying with the B-standard to represent Canada at the 2014 Glasgow Commonwealth Games. The B-standard is 2:35:00 and the A-standard is 2:29:55. Two Canadians have run the A-standard: Lanni Marchant, who ran a 2:28:00 Canadian record at the 2013 Scotiabank Toronto Waterfront Marathon, and Krista DuChene, who finished in 2:28:32 at the same race. DuChene broke her leg competing in the Canadian Half-Marathon Championships on April 27th and won’t be available to compete in Glasgow.

So how did Doerksen get to here? On April 6th, she won the BMO Sunshine Coast Half-Marathon in her hometown of Gibsons in the time of 1:14:53. It is a hilly course and doesn’t lend itself to spectacular times, although isn’t terribly slow either, as it does provide a net downhill. Two weeks later she finished second in the Vancouver Sun Run with a personal best time of 33:54.

She has consistently improved through the winter and spring of 2014. For example, her April half-marathon result suggests a marathon time very close to 2:40. The BMO Vancouver Marathon course is not one of the faster routes; regardless, she managed to perform at a higher standard in comparison to her half-marathon win.

Doerksen has recently established herself as a strong distance runner after having to battle iron deficiency for years; she wasn’t even aware she had this condition. Once it was diagnosed and treatment was administered to the point where her iron stores were near normal, her potential began to show. Recently she has finished near the top of the field in three consecutive races: the Synergy Health Bazan Bay 5k, where she finished second in 16:49; the BMO St. Patrick’s Day 5k, held on a rolling course, where she finished fifth in a very strong field with a 17:05, and finally the Modo Spring Run-Off 8k, where she again finished fifth in the time of 28:02.

Regarding her marathon performance she said, “At the start of the race I was a little worried about the weather and the temperature, but being a Vancouverite we’re used to the rain so I took it as an advantage over some of the other competitors. My teammate and friend Bryan Andrews went out at the same pace as me and was a rock through the entire race. We maintained a solid pace and tried to hold it for as long as possible until the “wall” started to build. At that point it was a matter of grinding it out until the finish. We were really fortunate to have our teammates, our coach John Hill and the locals lining the course cheering us on, which was extremely motivating.”

After all the recent racing she has done, it may be time for a short break: “As of right now the only plan I have is a sit-down and talk with my coach John Hill to talk about the summer and fall. I’m not sure what the focus in the fall is going to be, but I’m excited for whatever happens!”