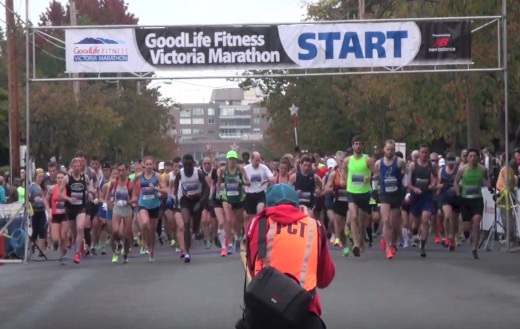 Four times was indeed the charm for Iten, Kenya’s Daniel Kipkoech who took in the GoodLife Fitness Victoria Marathon Sunday and won it for the fourth consecutive time, stopping the clock in 2:21:04. He led 1065 other marathon runners on a spectacular west coast day.

He finished five minutes ahead of Lethbridge’s Kip Kangogo, who experienced hamstring cramps throughout the race and had to dial back the pace. He finished in the time of 2:26:58. Kangogo owns a personal best of 2:15:26, while Kipkoech has run as fast as 2:18:49.

The third finisher was former Balclutha, New Zealand resident, Nicholas Browne who now lives In Vancouver. He crossed the line in the time of 2:30:51. Browne switched to ironman training for 2017 after failing to make the start line of several marathons. His personal best is 2:26:47 from Tokyo 2014.

“It was my fourth-fastest time today and best since Tokyo, so happy with it,” shared Browne. “I pulled out all the tricks and low mileage for the last 10 weeks to stay healthy.”

Kipkeoch wanted to take the course record which is 2:13:42 and owned by Lamech Mokono from 2013, however, the pace proved to be too rich and he just set his sights on a new personal best time.

The marathon and the half-marathon races started together. Vancouver’s Geoff Martinson – who is a former UVic Vike – took out the half-marathon in a blistering pace, drawing Kipkoech with him. Martinson’s performance is better than the standard to qualify for the 2016 IAAF World Half Marathon Championships, which is 66:00.

Although Kipkoech managed a 67:50 half-way split, good for a pace of 2:15:40, he would continue to fade ever so gradually. He ran alone the entire way.

“I was going for the course record. I went out hard and worked with Geoff Martinson for a while, but he was running too fast and I dropped back after a few kilometres,” shared Kipkoech.

Martinson, who ended up winning the half-marathon, ran through 10K in 30:05, over a minute faster.

Asked if he will be back for a fifth win Kipkoech hesitated, “Maybe. First I need to go back to Kenya and train well again.”

Kipkoech likes to race in Western Canada and plans to return in the spring to take in the Vancouver Sun Run and BMO Vancouver Marathon, which he has won two years in a row. “Yes, I would like to come back and win Vancouver for the third time and improve my personal best of 2:18.”

“I love this course, it is so beautiful. This is the most beautiful course I have been on,” shared Zimmer. “I new Dallas Road and downtown were nice, but I had never been to Oak Bay. It’s a great day and a beautiful course.”

Forty-seven-year-old Margreet Dietz was the third female and first master running. She crossed the line in the time of 3:03:47.

Seventh place finisher Ian Searle of Shawnigan Lake finished in the time of 2:40:42. It was his debut marathon. He attempted to better his father’s time (Kevin Searle), performance at age 49, which he ran in the time of 2:40:21. It was a good start for the younger Searle who is a University of Victoria Vike runner.

James Desalvo was the first master across the line. The Washington State-based runner owns a best of 2:30:48 from Victoria’s 2016 edition.

Thirty-two runners finished under 3:00:00. Aiden Higgins was the final under the benchmark with his time of 2:59:44.