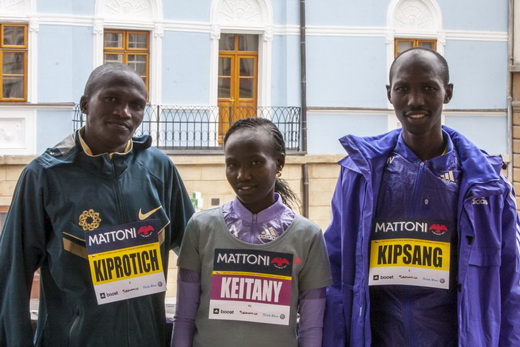 Two of the world’s best distance runners will face each other over the half marathon distance for the first time on Saturday: the Olympic Marathon champion Stephen Kiprotich of Uganda and Kenya’s former world record holder for the marathon distance, Wilson Kipsang, will line up in the Mattoni Olomouc Half Marathon. However, it is very possible that the highlight of tomorrow evening’s race in the Czech Republic will be provided by a female athlete when Kenya’s superstar Mary Keitany makes her debut in the RunCzech Running League.

These three outstanding athletes face tough opposition and success will be far from guaranteed. In the men’s field another nine runners have personal bests of under 62 minutes. Alongside Mary Keitany will be half a dozen women who have broken 70 minutes. This array of talent makes the Mattoni Olomouc Half Marathon one of the top road races anywhere in the world this summer and delivers further proof why it is an IAAF Gold Label event. „You don’t often see these three superstars compete in one race. This happens in London or New York, but now we have them in Olomouc – I am super excited,” said Carlo Capalbo, the President of the organising team. Live stream of the race can be seen on Saturday from 1855 CET on www.runczech.com.

The Olympic and World Marathon champion Stephen Kiprotich will be running his first half marathon of the year and only his second competition in 2015. The 26-year-old showed strong form in the Tokyo Marathon in February, finishing second and improving his own Ugandan national record by 47 seconds to 2:06:33. The Half Marathon in Olomouc will be an important test of his form as he builds towards the defence of his title at the World Championships in Beijing in August. At present his best for the half marathon is 61:15. „I have been preparing for Beijing, that is why I did not race in the past few months,” said Kiprotich.

This will be the first time that Stephen Kiprotich and Wilson Kipsang have run against each other in a half marathon. So far they have raced each other five times and Kiprotich has come out on top only once – but that was in the Olympic Marathon in London in 2012 when he overtook the longtime leader Kipsang to achieve a surprise victory with Kipsang finishing third. In their subsequent marathon encounters in London (2013 and 2014) and New York (2014), Kiprotich has been the loser.

Wilson Kipsang is usually the stronger over the half marathon compared to Stephen Kiprotich, who has been more of a marathon specialist. The Kenyan’s best for the half marathon is 58:59, a truly world class time which makes him the fastest runner in the field for Olomouc. But you never know – Kipsang was the clear favourite a year ago yet was beaten by one of his training partners, Geoffrey Ronoh (Kenya), who emerged a surprise winner with a course record of 60:17. This year Ronoh has had to withdraw because of injury but there is another Kenyan in the field who has broken the hour by a big margin: Jonathan Maiyo has a best of 59:02, only three seconds slower than Wilson Kipsang.

“I really enjoyed last year’s race in Olomouc. So I was happy to come back,” said 33 year-old Wilson Kipsang and added: “This time I am back to win and I am ready. The race on Saturday will also be a test for the World Championships’ marathon in August in Beijing. After Olomouc I will focus on this race.”

Mary Keitany is the outstanding athlete in the women’s field. The second fastest ever at the half marathon with a best of 65:50 which was the world record until a little over a year ago, has shown the kind of recent form which suggests an impressive performance: the 33-year-old Kenyan ran 31:15 for the New York 10k in warm conditions and she has already produced world class form in the half marathon with 66:02 to win in Ras Al Khaimah (United Arab Emirates) in February. Given favourable weather conditions, Mary Keitany could break the course record of 68:53, set by the double World Champion Edna Kiplagat of Kenya last year. “I am ready and hope for a good race,” said Mary Keitany, who did not want to project any times.

The race will be far from a time trial for Mary Keitany. Her strongest rivals are likely to be fellow Kenyans: Helah Kiprop arrives in Olomouc with a best time of 67:39 and Rose Chelimo is unbeaten this year. The 26-year-old recently achieved her fourth half marathon win of the year, taking the title at the Mattoni Ceske Budejovice event which also forms part of the RunCzech Running League. In conditions of torrid heat she won by a big margin in 72:01. Chelimo won the prestigious Lisbon title in March, setting a personal best of 68:22 and will be another of Mary Keitany’s challengers.

Further information about the Mattoni Olomouc Half Marathon can be found online: www.runczech.com