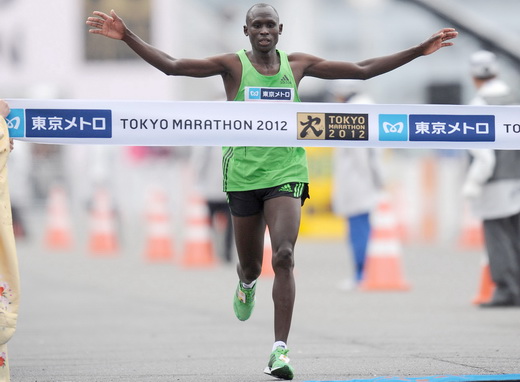 The 33 year old from Marakwet ran a personal best of 2:06:48 at the 2011 Eindhoven Marathon in his first year of marathoning and since then has beaten 2:07 three times – twice at the Tokyo Marathon.

Deressa Chimsa of Ethiopia holds the course record at 2:07:05 and was scheduled to race in Toronto – an IAAF Gold Label event – but withdrew earlier this week due to illness.

Up until 2011 Kipyego was best known as a 3,000m steeplechase specialist. Indeed, in 2002 he won the IAAF World Junior Championships in that event eventually racing to a splendid time of 8:08.48 in 2009. But in a country where the steeplechase is the dominant track event, not to mention a source of national pride, he wisely chose to change disciplines.

“I was a good steeplechaser but on the track you need a kick and I was lacking that,” he explains. “I had my success on the track but it was time to move on and try the marathon while I am still fresh in the head.”

Kipyego will line up against one of his training partners, Laban Korir, the defending Toronto Waterfront champion, and fellow Kenyan Peter Some at the start on Toronto’s University Avenue. Kipyego believes he is in the kind of shape he needs to be in to win the race.

and I saw Laban winning it last year. I have raced Peter Some in Tokyo twice. I beat him once and he beat me once. I don’t think I have raced Laban. I am looking forward to meeting everybody as great competition brings us great results.”

Kipyego comes from a very successful running family indirectly the result of a tragedy early on in his life. When he was only six years old his father died leaving his mother to raise seven children.

Furnishing school fees was nigh impossible. But the legendary Irish Catholic priest, Brother Colm O’Connell, sensing Kipyego had some promise, arranged to have his tuition fees waived so he could attend St. Patrick’s High School in Iten and compete in athletics. This is the school that boasts numerous Olympic medalists.

Brother Colm coached him to the world junior title in 2002 before he joined the camp of Patrick Sang, the 1992 Olympic 3,000m steeplechase silver medalist. Today the training group reads like a who’s who of marathon running and is having an enormous positive effect on Kipyego’s preparation for Toronto.

“Training is going well. After a slow approach, because I dropped out with an injury in Tokyo (this year), I picked up fitness nicely and at the right moment, it seems,” says Kipyego. “I train with athletes like Emmanuel Mutai (second fastest all time at 2:03:13), Eliud Kipchoge (2015 London and Berlin winner), Bernard Kipyego, Bernard Koech, (Uganda’s 2012 Olympic champion) Stephen Kiprotich and the Toronto-defending champion Laban Korir among many others.”

A year ago Michael’s eldest brother, Christopher Kipyego at the ripe old age of 40, ran 2:11:59 at Grandma’s Marathon in Duluth, Minnesota. And the 2012 Olympic 10,000m silver medalist, Sally Kipyego, is their younger sister.

Kipyego is a committed Manchester United fan just like compatriot Peter Some. When he is not training he shares, with his wife, the parenting duties of their two young children and watches English Premier League soccer. He also visits his mother. With his race earnings he built a house for her in the village of Kemeloi in the Marakwet area.

Toronto Waterfront offers Cdn$20,000 to the winner with the runner-up earning $12,000. Of course, he can find use for such a sum. So the task at hand will be to fight for the victory. He looks forward to implementing his race tactics next Sunday.

“Normally I try to conserve energy for the latter stages of the race. It also depends on the other athletes who are still there. You will have to adjust your tactics on what you see around you,” he suggests.

“At the 2012 Tokyo Marathon Haile (Gebrselassie) and (Hailu) Mekonnen went out crazy after half way and they got almost forty seconds on me. But after 35km they both came back to me and I was able to leave them. In that race I didn’t attack once and it came to me.

“But in 2013 I should have attacked in Tokyo because I responded too late to (Dennis) Kimetto’s attack. He got ten seconds on me which was stable for like 8-9 km and I wasn’t able to close it anymore.”

On that day Kipyego finished 2nd to the man who eventually beat the World Record in Berlin last year.

A victory in Toronto will by no means be easy as the field is of the calibre befitting an IAAF Gold Label race. But spectators can be sure Michael Kipyego will come to run.