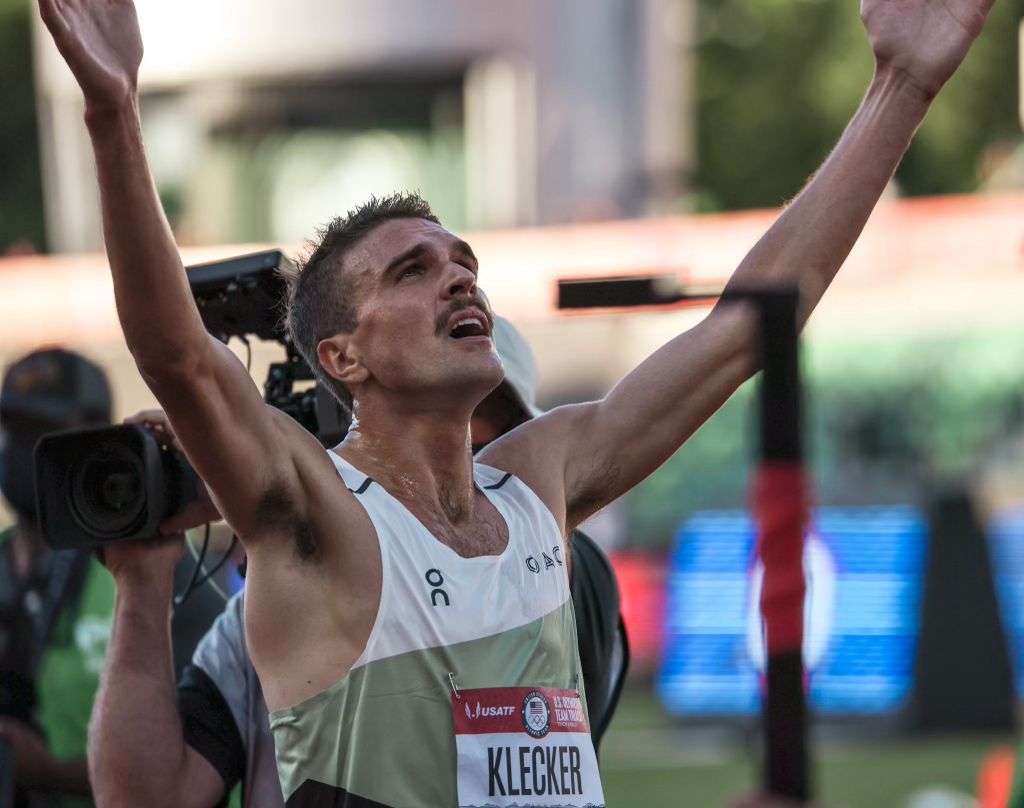 Joe Klecker won the 2022 USATF 10,000m Championships Friday in Eugene. Oregon at the Prefontaine Classic. His final lap of the 25 at Hayward Field was 54.81. Grant Fisher, living in nearby Portland ran shoulder to should with Klecker until the Colorado-based runner dropped gears on the final straightaway. Klecker clocked a 28:28.71, Fisher was on his heels with a 28:28.81 performance.

Last night @JoeKlecker won his first national title at the @usatf 10,000m Championships. He also booked his spot on the team for @WCHoregon22. Congrats, Joe! pic.twitter.com/T6jKcWIeom

Sean McGorty bided his time in the pack for much of the race. During the final 200m, he too dropped the hammer passing Lopez Lamong, Dillon Maggard, and Emmanuel Bor on the straight to finish in the time of 28:29.57 — it was a smart, tactical race.

The athletes started the race at a comfortable pace. Bor led for 5,000m and passed through halfway in the time of 14:31.27. Woody Kincaid who was expected to compete for a top-three position, faded.

Just before entering the final lap, Klecker took the lead. He spread the field a little and continued to separate himself from the field with Fisher a-tow.

Klecker, running for On Athletics Club in Colorado is a 25-year-old Minneapolis native and is having a good run of it lately. He has set five new personal bests during 2021 and 2022. His best over 10,000m is 27:23.44 from 2021. Klecker also competed in the Tokyo Olympic Games. As did Fisher.

Fisher finished an impressive fifth in Tokyo. The 25-year-old holds the American record and North American fastest 10,000m time of 26:33.84. The Canadian-born American attended Stanford University and now runs for the Bowerman Track Club and is coached by Jerry Schumacher.

Tokyo Olympic Games athletes Alicia Monson and Karissa Schweizer took off from the field during the final 10 laps of the 25-lap race. Schweizer made a move with 200m remaining to win in the time of 30:49.56. Monson responded to the kick but couldn’t keep up and finished second in a new personal best time of 30:51.09. The two are now the fifth and sixth-fastest Americans of all time.

Natosha Rogers and Emily Infeld ran together during the final lap. Rogers, however, hung onto third-position clocking 31:29.80.

Similar to the men’s race, the early pace was comfortable. The leaders split 15:50.43 at halfway.

After halfway, Monson surged and took the lead. Monson and Schweizer dropped a sub-72-second lap to open up a gap on the field. From there, they continued to drive nails into the field’s coffin. They hammered a 68.23 during the 24th lap and went 64.14 on the final lap.

We’re feeling that ✨Hayward Magic✨ at the USATF 10,000m Championships!

Monson competed in the NCAA for the Wisconsin Badgers. Like Klecker, the 24-year-old Amery, Wisconsin native is coached at On Athletics Club by Dathan Ritzenhein.

The championships allowed six athletes to secure their place on the US team competing in the World Athletics Championships in July, in Eugene, Oregon. Four of them are Tokyo Olympians.