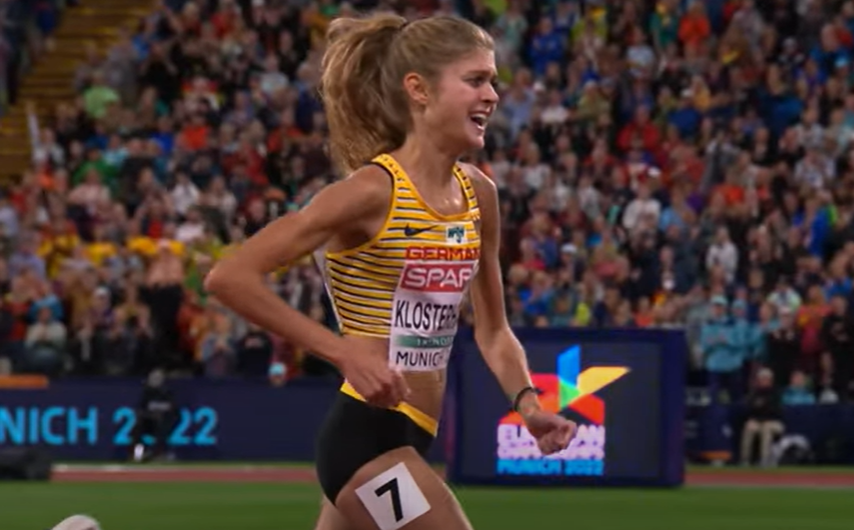 Konstanze “Koko” Klosterhalfen won the Munich European Athletics Championships 5000m in commanding fashion, with a blistering final lap, to bury her competition. It was as if she channelled Scot Eilish McColgan, who did the same thing at home in Great Britain during the Birmingham Commonwealth Games. Klosterhalfen was at home in Munich — the crowd spurned on the German athlete with great emotion.

Konstanze Klosterhalfen had the stadium on their feet as she cruised to 5000m victory in 14:50.47 🔥#Munich2022 pic.twitter.com/p9TncXNaOG

Finishing in second place was Yasemin Can of Turkey clocking a 14:56.91 performance, while McColgan took bronze in 14:59.34.

According to her coach, Sonia O’Sullivan, Klosterhalfen hadn’t run at a championship level for a while. Having done so, she finished with great emotion. The last time she earned an international medal was at the 2019 Doha World Athletics Championships. Klosterhalfen took bronze in the time of 14:28.43.

McColgan took silver in the 10,000m event in Munich with a clocking of 30:41.05 and silver in the 5000m in Birmingham with a 14:42.14. This summer was a little redemption for McColgan who missed at the Tokyo Olympic Games. She hopes to move up to the marathon next, and leaving the track on a high note was something that she was hoping to accomplish.

Klosterhalfen, who had COVID in June suffered through the World Championships in Eugene, not making the final. She finished fourth behind Can, McColgan, and Israel’s Lonah Salpeter in the 10,000m in Munich, but prevailed in the 5000m with a solid kick.

In Munich, Can took the field out hard, and Klosterhalfen and McColgan followed, biding their time as the athletes behind them spread out with the hot early pace. With two laps to go, Klosterhalfen sat on Can’s shoulder, McColgran was in bronze medal position a few seconds back. The crowd was on its feet, cheering vociferously.

Klosterhalfen took the lead on the back straight, with less than 700m to go. She kept the pace strong as Can began to fade a little over the final 200m.

It was an emotional win followed by a celebratory victory lap with the German flag and the crowd on its feet cheering on her stunning performance.