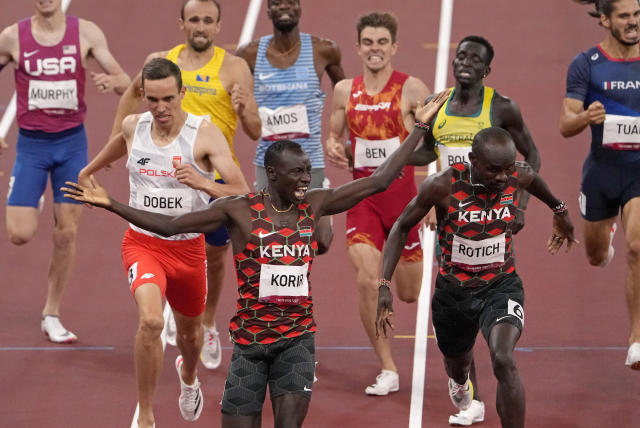 The 800m race, is it an endurance event or an elongated sprint? It’s the eternal question.

The answer is both. The race has no room for error, can include jostling and tactics, and it is arguably the most competitive event in athletics. A top-10-ranked athlete can win or finish 10th or even 20th in the time it takes to blink. Miss an opening, go out half a second too fast or too slow and it’s all over.

In fact, six athletes finished under 1:46. It was any man’s race and even in this long sprint or short endurance event, a good lean and running through the finish line at speed can make all the difference.

Botswana’s Nijel Amos was favoured to win. He finished in the time of 1:46.41 for eighth place. He might as well have been a mile back finishing slightly more than a second out of bronze.

Dobek is a converted 400m hurdler. He now owns an impressive 800m best of 1:43.73 from June of this year. But in the hyper-competitive world of the 800m, he wasn’t on anyone’s radar, however, perhaps his sprinting legs made the difference in this tactical final. His only other global competition of note was the World Athletics Championships in Beijing six years ago where he finished seventh in the 400m hurdles final.

Rotich owns a personal best of 1:42.54, which puts him 43 on the all-time list. Nearly one second slower than Amos with his best of 1:41.73 which is the ninth-fastest performance all-time. And he is the fourth-fastest man behind only David Rudisha, Wilson Kipketer of Kenya and England’s Sebastian Coe. Korir’s best is 1:42.05.