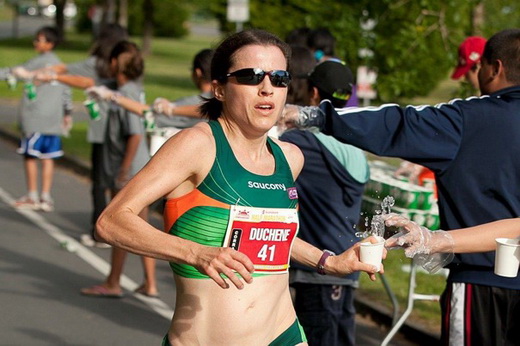 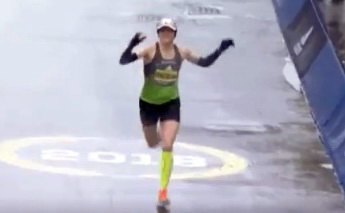 You just can’t keep a good woman down.

Krista Duchene of Brantford, Ontario owns the second fastest marathon time in Canadian history with her 2:28:32 performance from the 2013 Toronto Waterfront Marathon. That performance is also the national record for the women’s 35-39 age-group.

The record for the fastest marathon by a masters age (40-plus) athlete is held by Lioudmila Kortchaguina at 2:33:12. The Russian-Canadian ran that time during the 2013 edition of the Ottawa Marathon.

During the 2018 B.A.A. Boston Marathon on Monday (Patriots Day), Duchene finished third overall in very adverse conditions. She finished in the time of 2:44:20, just 4:26 behind the eventual winner American Desiree Linden (Davila) who broke the tape in the time of 2:39:54. American Sarah Sellers was credited with a 2:44:04 finish time, she placed second. For perspective, Linden owns a best of 2:22:38 from Boston 2011.

The 2018 Boston Marathon runners started with temperatures of 5 Celsius, heavy rain and strong winds of 25-40/kph. The starting wind chill was apparently -1. The temperatures may have climbed up to 9 degrees, less the wind chill factor – so perhaps at best, 5-6 degrees.

No problem for the hockey mom. Duchene was four minutes back of third position at the 35-kilometre mark and sitting in 10th place.

The positions she made up over those final seven kilometres is remarkable, but not surprising, considering the 41-year-old mother of three once raced a half-marathon with a broken leg. She recovered and came back to run the 2015 Rotterdam Marathon in the time of 2:29:38 the next year, complete with a plate screwed into her femur at the hip.

Her 2:44:20 is less than a minute slower than her 2017 London Marathon performance, which was run in much more favourable conditions.

Three weeks prior to this year’s Boston performance, Duchene finished second to Vancouver’s Dayna Pidhoresky in the oldest distance race in North America, the Around the Bay 30K in Hamilton, Ontario. She crossed the finish line into a headwind in the time of 1:51:22.

In an unusual route to elite marathon running, she started racing in her early 30s after retiring from hockey.

In 2012, she and fellow Canadian Lanni Marchant ran impressive new personal bests at the Rotterdam Marathon, finishing in the time of 2:32:06 and 2:31:51 respectively. At the time, those performances were faster than the IAAF’s standards for making the 2012 London Olympics, but not under Canada’s own standards. The two were not nominated to run for Canada, despite, there being no other women to qualify.

At the time, the IAAF qualification standards were A: 2:37:00 or B: 2:43:00, Canada, despite having nothing but scorched earth in the historic event wanted Canadians to run nearly within a minute of the national record, with one standard: 2:29:55.

The two appealed to Athletics Canada but were turned down. They then appealed to the Court of Arbitration for Sport, but their request to compete for Canada fell on deaf ears.

The two fought a hard battle (Marchant is a lawyer) and went on to prove Athletics Canada wrong during the 2013 Toronto Marathon, where Marchant broke the national record with her performance of 2:28:00 and Duchene finished 32 seconds back.

Although it is not fair to compare global championship marathon events that are run in the heat and with tactics, 84 women would finish slower than 2:28:32 during the 2012 London Olympics marathon, not including several who dropped out.

Marchant went on to finish in fourth place during the 2014 Glasgow Commonwealth Games with a 2:31:14 and competed in both the marathon and 10,000-metre distances at the 2016 Rio Olympic Games. Duchene competed in the Rio Olympics too, while both have raced in the IAAF World Track and Field Championships.

Duchene is a two-time national half-marathon champion, while Marchant owns the second fastest half-marathon in Canada, behind Vancouver’s Rachel Cliff, it was Marchant’s record until Cliff took it down on March 3 this year with an impressive 1:10:08 from Woodland, TX.

On Monday, Duchene was racing for the victims of the Humboldt Broncos bus crash that killed 17 and critically injured several more, while on the way to a Junior A playoff game in Saskatoon.

Who knows what’s next for Duchene, but expect it to be good, if not downright feisty.