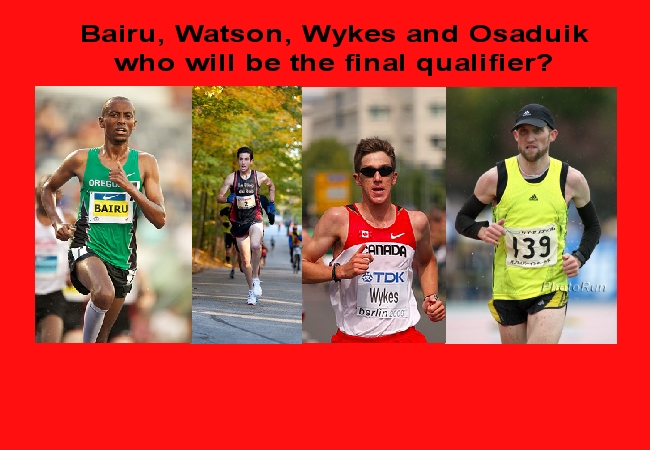 Canadian Marathon runners Dylan Wykes and Steve Osaduik, are preparing for their final opportunity to qualify for the 2012 London Olympic Games Marathon by taking on the stacked (see men’s elite list below) Lake Biwa Mainichi Marathon (or “Biwako,” as the race is known in Japan) on March 4, 2012.

Both Wykes and Osaduik ran the First Half Half Marathon in Vancouver, BC on February 12th. Wykes won handily in the time of 64:21, Osaduik finished second in 67:25, one week after winning the Huntington Beach Half Marathon, finishing in the time of 66:34. Asked if he was aiming for a marathon-pace effort and perhaps went a little fast Wykes said, “Yeah probably came out a tad richer than I’d like marathon pace to feel. But it’s all good. Feeling good and looking forward to three weeks from now.”

Osaduik on his back-to-back half-marathons said, “I think my legs were a little more fatigued than I thought they would be after the half I ran last week in Huntington. I figured it would be good to get two half-marathons back-to-back to see how I would feel. To be honest last week (Huntington) felt more like marathon pace, which is how I ran that race.”

Wykes, Osaduik, Rob Watson and Matt Loiselle are all seeking the final marathon spot to fill out the three member team to compete at the London Olympic Games for Canada. Currently Reid Coolsaet 2:10:55 and Eric Gillis 2:11:29 have run the Athletics Canada A-standard of sub-2:11:30. Wykes is the next closest with his 2:12:57 which he ran (as did Canadians Loiselle, Coolsaet and Gillis) at the Toronto Waterfront Marathon on October 16, 2011.

Watson, when asked how training is going replied, “training is going quite well, I’m feeling great, but I’m not ready to rock the marathon quite yet, need a few more weeks to get nice and fit!”

Commenting on whether the Vancouver First Half Half Marathon is a fast course Wykes said, “It’s hard to say whether the First Half course is fast or not. It is obviously very flat. But lots of little twists and turns. Rich (coach, Richard Lee) always says its nice for running uptempo like 5:10-5:30 pace, but once you start trying to run 5:00 or faster it can be tough to keep your momentum going. I don’t think it’s a course where I could go out and run 1:02.”

Osaduik, Loiselle and Watson appear as the long shots with marathon personal bests of 2:16:49, 2:16:01 and 2:16:17 respectively. Osaduik set his personal best at the 2006 Royal Victoria Marathon, Watson at the 2011 Houston Marathon and Loiselle at the Toronto Waterfront Marathon. Osaduik has indicated recently that training is going very well.

Simon Bairu who owns the Canadian 10,000m record of 27:23.63, seven Canadian Cross Country Championships and a half-marathon personal best of 62:08 has yet to qualify for the London Olympic marathon and is now focusing his attention on the 10,000m distance, “My focus is now on qualifying in the 10,000m race,” says Bairu. “Everything is going well,” he added.

One added piece of intrigue is the elusive Canadian Marathon record time of 2:10:09 currently owned by Jerome Drayton. He achieved the record at the prestigious Fukuoka Marathon in 1975. This record time is anticipated to fall soon. As a national marathon record it is considered soft and at 37-years-old – a dated record. It just may be surpassed by three or four of the above-mentioned Canadian athletes.

Right on schedule the organizers of the Lake Biwa Mainichi Marathon, the last chance for Japanese men to make the London Olympics marathon team, have announced the complete field for this year’s race.  Coming on Mar. 4 just a week after the Tokyo Marathon, Biwako, as the race is known in Japan, has managed to put together a strong international field, both at the front end and further back at the level where people will be trying to meet their countries’ Olympic qualification times.  The clear favorites in the first category are 2:06 Kenyan Nicholas Manza and 2:07 Ethiopian Bekana Daba, but with Japan based Kenyans Gideon Ngatuny (Team Nissin Shokuhin) and Samuel Ndungu (Team Aichi Seiko) on the list to make their debuts the lead pack could be deeper than usual.  Biwako has always been good to Spanish marathoners, and with sub-28 runner Ayad Lamdassem entered for an apparent debut it is possible that this year could see another one factor into the race.