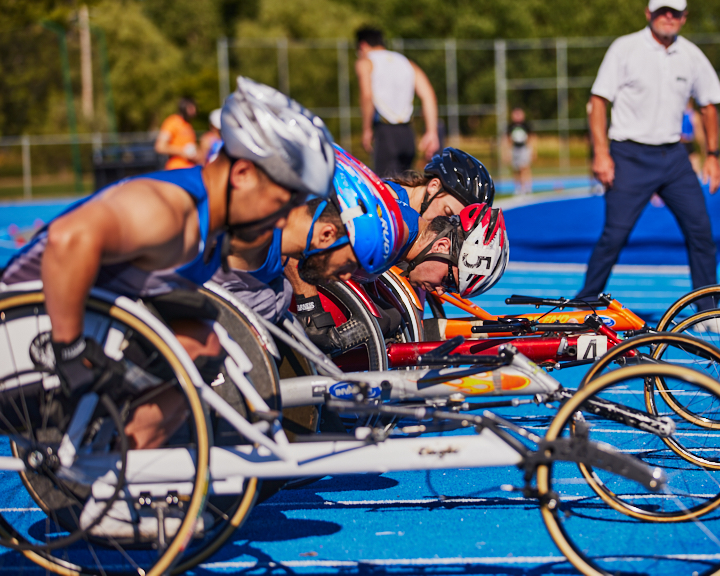 As the world gets back to Old Normal, Langley was the place to be this weekend for BC’s Track and Field athletes if they are not already in Tokyo.

The Langley Mustangs and BC Athletics hosted over three hundred U16-to-senior competitors Saturday and Sunday for the BC Athletics 2021 Group Sprints and Jumps Challenge while Victoria hosted the Endurance Challenge races at the same time.

“This is not a normal year,” said organizer and Langley Mustangs head coach Andrew Lenton, who has an impressive athletic pedigree himself. Coach Lenton set BC records in the 1500m, 3000m, and 5000m, and was once ranked ninth in the world for the 1500m distance event.

“Covid-19 logistical complications have limited the scope of participation,” explained Lenton. “But the competition was fast and fierce and excitement was high.”

Spectators were welcome and the stands, though not packed, were very noisy as spectators cheered on some of the province’s top junior and senior athletes.

Fans and families enjoyed 100m sprints, and events as long as the 800m as well as wheelchair sprints. With running and rolling, relays and hurdles; pole vaulting, long jump, high jump, and triple jump — there was lots for fans to cheer about.

Ana Fonseca, a Trinity Western University Spartan, set two personal bests during the pole vault competition. She vaulted 3.40m and 3.65m on Saturday. Over the two days, many athletes performed beyond past limits thrilling spectators with high-level competition.

“Thanks to many volunteers, The Langley Mustangs staff, BC Athletics, the two-day event was a great success,” added Lenton.

Full results for the weekend can be found here; http://results.swanracing.ca/langleybcchallenge/

Nathan Dewitt, 2012 Canadian Paralympic Team member won big at the BC Track & Field Challenge in Langley BC over the weekend.

The former BC Athletics Athlete of the Year recipient took top honours in stifling 28-degree heat and blistering sun Sunday at McLeod Athletic Park Stadium. The temperature on the track was well into the thirties, but Dewitt overcame the heat sprinting away with a clean sweep in the wheelchair competition.

Dewitt was one of several hundred track & field athletes in age groups from U16 to senior competing this weekend, as BC sports begin the trackback to the old normal.

In his rookie season of wheelchair racing, Dewitt won the Avche Pinkard Award for the Wheelchair Race Series. Sunday he raced for the BC Wheelchair Sports Association.