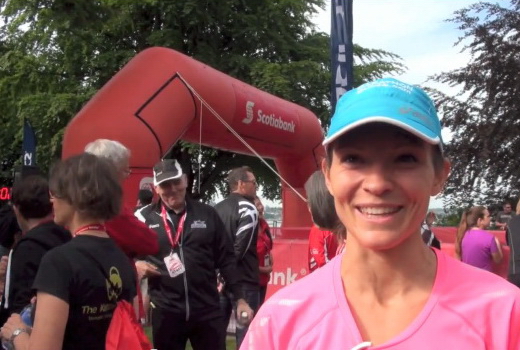 Lanni Marchant and Krista DuChene’s appeal of the decision by Athletics Canada to not let them compete during the 2012 London Olympic Games in the marathon event was turned down. DuChene said, “I think it’s safe to say, on behalf of Lanni and I, that we were disappointed but not entirely surprised. One final step we can take is dispute resolution through the SDRCC – Sport Dispute Resolution Centre for Canada.”

Marchant of London, Ontario ran the 2012 Rotterdam Marathon on April 15th in a personal best time of 2h:31.50. She finished in fifth place. Close behind her was fellow Ontarian (from Brantford) Krista Duchene. Duchene also ran an outstanding race to finish seventh in a personal best of 2h32.06 improving by almost seven minutes. Both times are faster than the International Association of Athletics Federation (IAAF) requirements for athletes to qualify to contest the marathon distance at the 2012 London Olympic Games.

The Canadian standard is:

The Canadian standard is set higher and is based on previous Olympic marathon finish times. The benchmark is set at where Athletics Canada (AC) believe that the athlete, should they achieve the standard, are then capable of finishing top-12 during the London Games. That time is set at 2:29.55, there is no “B” standard for this event. Athletics Canada believe that 2:29:55 is equal to a “B” standard.

Marchant and DuChene petitioned AC, based on being the top two female marathon runners in Canada, while having run much faster than the IAAF standards. The first petition was denied 16 days after their submission. Marchant and DuChene appealed the decision to the National Teams Committee (NTC), requesting their nomination to the 2012 Canadian Olympic Team on the basis that they qualify as ‘Rising Stars’ and their performances meet the Olympic goals and high performance principles of Athletics Canada. Additionally, Marchant and Duchene feel that because their was no “B” standard, only an “A” standard they were not able to be considered as Rising Stars.

Rachel Corbett, a designated official under Athletics Canada’s rules –  the administrator of appeals under Rule 140 wrote, “The decision reached in the appeal is binding on the parties subject only to any further appeal that may be permitted under the arbitration rules of the Sport Dispute Resolution Centre for Canada (SDRCC). (See Rule 140.14).

The SDRCC is a government funded dispute resolution program that all sport bodies in Canada and their members subscribe to. It has a website (www.sdrcc.ca) and more information is available about how such a final arbitration would work.”

The initial publication of rising star criteria came out in September 2010, before Marchant and DuChene were considering qualifying for the Olympics, as DuChene had (within the year) her third child and neither of them were fast enough. Their April 15th 2012 Rotterdam Marathon results were unexpected. Therefore they feel they were not given opportunity to contest the removal of the Rising Star criteria.

Additionally, Marchant and DuChene claimed that Athletics Canada were using outdated notions of marathoners as older athletes that develop through competing at shorter distances. A Globe and Mail article cited as an example, (Rob Guy is with Athletics Canada):

“Mr. Guy said the organization doesn’t have a “rising star” category in the marathon because
most marathoners started out in other events, such as the 10,000 metres, and they are not
typically young and upcoming runners. “It didn’t make a lot of sense to have a rising star
category for the marathon because that’s not typically how they develop.”

The Panel did agree that Athletics Canada’s reason for not having the Rising Star criteria was not clear however, Marchant and DuChene’s times of 2:31.50 and 2:32.06, according to the panel, would not have them finish in the top 24 of the Olympic Games.