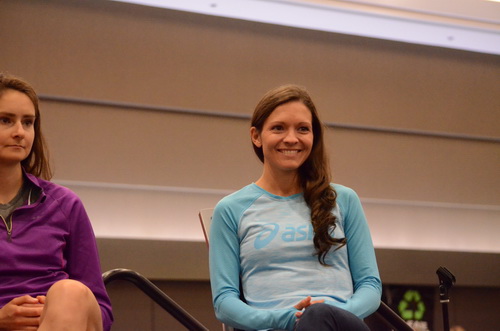 Lanni Marchant continues to prove that she is an international calibre long-distance runner, by crushing the field with her elite performance at the Yonge Street 10k Sunday, April 21st in Toronto, Ontario.

Canadian Marchant, based in Chattanooga, TN ran an impressive new personal best time of 31 minutes and 56.5 seconds to place 16th overall and first female. She led second-place Toronto native, Rachel Hannah by over one and a half minutes, Hannah finished in a solid 33:38.2. Paula Wiltse from nearby Oakville finished third and first master (over 40) while competing in the 45-49 age-category. Her time was 34:56.0.

Marchant, who nearly qualified for the 2012 London Olympic Games marathon with a surprise 2:31.50 finish at the April 15th 2012 Rotterdam Marathon, continues to improve. Her previous 10k road personal best was 34:09 from the 2012 running of the Yonge Street 10k. Sunday’s performance is a 2:13 improvement on that performance. Likewise, Hannah’s personal best 10k was slightly faster at 34:02, which she also set at the 2012 Yonge Street 10k – a fixture in the Canada Run Series, this performance represents a 34-second improvement.

Marchant’s plan was to race hard, she said, “I went out from the gun. In the first few steps, I saw that Rachel (Hannah) took off, which was good because it reminded me that I was supposed to gut it out from the gun. My legs felt like they had tar in them for the first km or so…so then I adjusted to the quicker pace and just did my best to keep the pace going all the way to the finish line.”

Proving she can race and not just time trial, Marchant, at times found herself alone on the course. Often athletes can lose rhythm without focus when not finding a challenger to key off of, or “race”, “I kept finding myself in no-woman’s land, but just kept looking at the guys in front of me and tried my best to chase them down,” shared Marchant.

Next up for Marchant is the Ottawa 10k, which happens Saturday, May 25th as part of the Tamarak Ottawa race weekend – the night before the Tamarak Ottawa Marathon, then she will compete at the Scotiabank Vancouver Half Marathon, where she will be seeking an opportunity to continue her international-level running, as she will be toeing-the-line at the 2013 IAAF World Track and Field Championships in Moscow, Russia, they start August 10th and wrap up on the 18th.