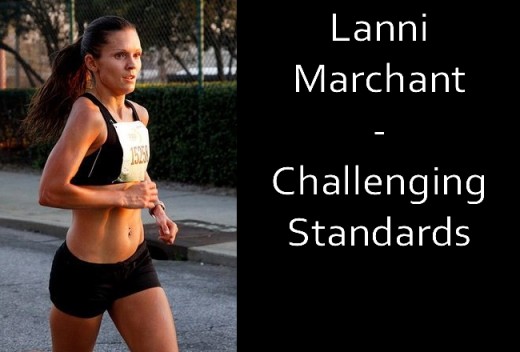 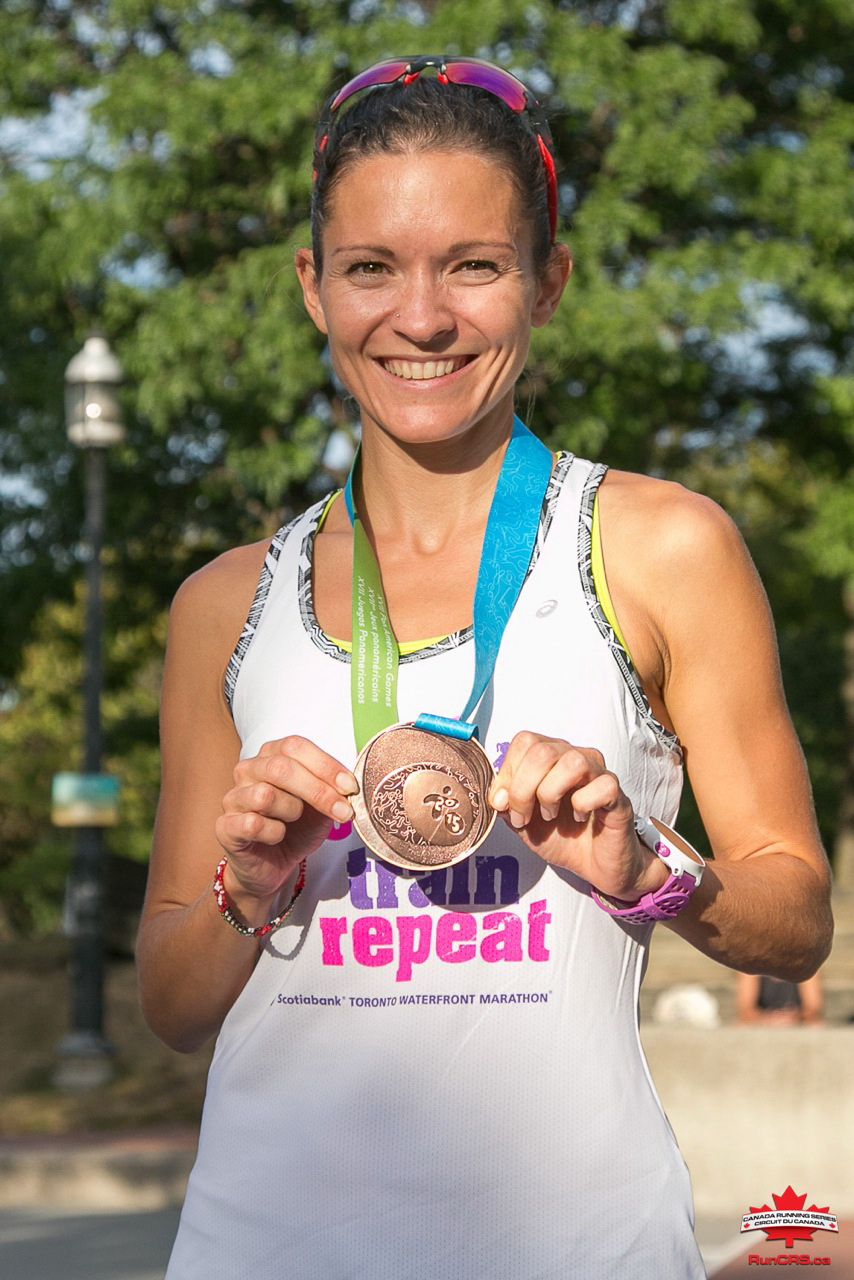 io ran the 2012 Rotterdam Marathon on April 15th in a personal best time of 2h:31.50. She finished in fifth place. Close behind her was fellow Ontarian (from Brantford) Krista Duchene. Duchene, a mother of three, also ran an outstanding race to finish seventh in a personal best of 2h32.06 improving by almost seven minutes.

Her marathon progression started with a 2:49 Ottawa Marathon, May 2011. She followed that up with a 2:44 in October at the Chicago Marathon.

In April of 2011, I asked her if her half-marathon best (1h14 at that time) that translates to a sub-2h40 marathon gives her license to go extra hard to try to make international standard, Marchant said, “Of course it is something I play with in the back of my mind, where if I put it all on the line – if it gets me close to a qualifying time, great! If not, hopefully it will serve as a learning experience for the years to follow…. I do think that the sky is the limit in terms of what is fair game for me to achieve. I think a lot of our distance specialists are looking to 2012 and licking their lips, I hope that I can be part of that group, I want to be part of it!”

CK: Can you take us through your 2012 Rotterdam Marathon?

LM: It was a blast! I had been told a few days before the race that they expected some wind, but tried not to let it really play any role in my pre-race prep. Krista (Duchene) and I tried to arrange to run with another girl who was going for 2:30, but that fell through less than 5k into the race. Krista and I actually ended up with a group of 15-ish people behind us (including about 10 men), drafting, letting the two little brunettes break the wind for them. We went through the half-way point about a minute slower than we wanted. I started to press a little more, but still felt really comfortable and strong. Around 32k my right calf started to cramp and within a few minutes my left calf was joining in the cramping fun. I tried my best to keep running with a normal stride, but realized soon on that I was going to have to modify if I wanted to keep full spasm from happening. By 35k I knew that the Canadian standard was out of the picture, but was well aware that I had a very good time going still.

Coming down the finishing line was surreal. I could see the clock and knew that I was going to break 2:32 and was a little bit in shock. I guess I had accepted that I’d be a strong 2:40 marathoner and though I was going for the standard, half expected to blow up and run a less than stellar time. Needless to say I am super excited about what running holds in store for me now.

CK: You ran faster than the IAAF qualifying standard to run in the London Olympic Games, but outside of the Canadian standards. Apparently there are some rumours about you and Duchene starting an appeal process to try to get qualification. Is this true?

LM: From my understanding Athletics Canada is not at the stage that they are willing to go to bat for Krista and I. So yes, Krista and I are appealing. I think we have some pretty sound arguments to make.  I hope that Athletics Canada will see and understand the benefit Krista and I can bring to Canadian female distance running, especially considering there has been little to no encouragement and support for any Canadian women to chase after these standards.

CK: What will that appeal look like? Is there a protocol that is laid out for you to follow or are you trying to set a precedent?

LM: We basically write a letter – a very well researched letter. Hopefully Athletics Canada will accept our arguments for why there should be an exception and they should send us. I think it is time for a new precedent in Canada.

Following the current system, where it is almost as if Athletics Canada is too afraid to make an exception now based on their denials in the past – is pathetic. Working in the legal field has shown me that a precedent doesn’t have to be binding. Athletics Canada maintains that they are bound to this decision based on their previous decisions however, they need not be. Judges rely on underlying facts to distinguish one case from another so as not to be necessarily bound by a precedent. It doesn’t make sense that Athletics Canada sees itself as being above the standard practices of our legal system.

CK: When you say that there is little to no encouragement and support for any Canadian women to chase these standards, can you qualify that apparent lack of support?

LM: Women’s marathoning has not been on Athletics Canada’s radar since the last Olympics when once again our women met the Olympic standard but not the stringent Canadian standard. When Eric Gillis ran 2:13 heads turned, as they should have, and there came a huge push to get our guys going for the marathon standards, and we now have three of the fastest men we have had in years. When Nicole (Stevenson) and Tara (Quinn-Smith) ran 2:32 high/2:33 low, there was not the same push to get more girls interested in marathon running. Krista and I set out on this journey on our own, with most people choking back laughter when we said what we were trying to do. The fact that people within our Canadian running community thought that our attempt to chase this standard humorous it corroborates    the fact that standard is unrealistic.

CK: When you say that when Gillis ran 2:13 there was a big push, but when Tarra Quinn-Smith ran her personal best there wasn’t, can you describe that to me – like how did that manifest itself?

LM: It isn’t that the running community wasn’t excited for Tarra, but there just wasn’t the same excitement that sparked a whole movement to get Canadian women to the start line at the Olympics,  like the men had.

CK: Earlier you said you were in shock about your performance, does that mean you were you not keeping splits all along?

LM: I was taking my 5k splits, but when my calves started to cramp I stopped looking at my watch and tried to keep moving forward. I thought that I had slowed down a lot more than I actually did and in the last KM I realized that I was still going to run a pretty awesome time.

CK: Do you think the cause of the cramping was a lack of mileage and marathon-pace work leading up?

LM: I am not sure why they keep cramping. I did a lot more mileage for this race and did a fair bit of marathon-paced workouts and tempo runs. I tried focusing on my electrolytes, but now think it might be more the mechanics of how I run. I already do some lower leg strength exercises but obviously need to do something different. They have gotten a bit better, they used to cramp quite badly in half marathons and in my long runs, but now I can get through about 20 or so miles before they start to go on me.

CK: How did your training go leading up to Rotterdam?

LM: Training went really well leading up to the race. I started my training program over in Kenya, where I ran on nothing but soft surfaces. I think that is the only way I was able to increase my mileage and did not end up injured. When I returned to the U.S. I was able to keep my mileage up and things just kind of kept going well. I had to cut one workout short and one long run because my right achilles was tight for a few days, but otherwise made it through the entire program healthy.

CK: What did your training look like six month and three months ago? Can you provide sample weeks?

LM: Six months ago I did not go above 60 miles-per-week. I would usually do two workouts weekly and one long run. My first workout would be hills and longer intervals, my second workout was usually shorter intervals, but a lot of them. The weeks that I would do my super long runs, the rest of my weekly runs were fairly short and I always had the option of taking Fridays off.

Three months ago I was starting my build up for Rotterdam. I started running 2x a day, 3x a day when I had a workout (a super early morning shake out run – 30 min, then I’d do my workout session, and then a 30 min shake-out run in the evening). My long runs got progressively longer each week, and I added in some more tempo-paced work either as my second hard session of the week, or for portions of my long run.

On training in Kenya

“After training in Kenya for six weeks, I knew that I had come back a very different runner. My mileage was the highest it has ever been and my mindset towards training and racing was a lot more calm than how I approached running previously. I guess I’ve adopted the Kenyan chilled attitude towards running… be prepared to get down to business for the hard sessions and races, but keep it casual and fun on the easy days. I think training in Kenya also helped me realize that Law is something I can do anywhere. I did a lot of research for the law firm while I was over there, which was a great distraction from running (I love running but I need to use my brain to think about things that aren’t running related).”
Monday AM – 3 miles easy + strides  –   PM – strength