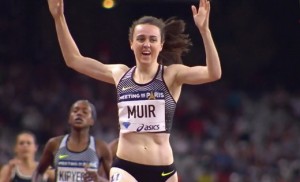 Scotland’s Laura Muir is on fire.

After finishing in a disappointing seventh place during the Rio Olympic 1500-metre final, she went to Paris to compete in the Diamond League at the Stade de France on August 27th. In La Ville Lumière she raced to a new British record time of 3:55.22, it was a brilliant performance.

She sat in third place for the first 1050m of the race and then lit up the final 450m to win in convincing fashion. Her performance is a meet record and the world lead.

Today she captured the 2016 Diamond League title by finishing second in the 1500m at the Zurich track meet. She was pipped at the line by American Shannon Rowbury. The third place finisher was Sifan Hassan of the Netherlands. For the Diamond League win Muir earns $40,000.

Muir told the BBC, it was “amazing” to be Diamond Race winner and “I never expected anything like this.”

This season, Muir won both the London and Paris meets. On July 22nd in London, she had set a new British record at 3:57.49. In Paris, she bettered the record with her 3:55.22 performance. That’s two and a quarter seconds faster than her own British record set the preceding month.

Only 12 women in history have run faster while it is the 16th fastest time in world history.

Asked about her expectations going into the Paris race Muir told Athletics Illustrated, “I didn’t really have any expectations to be honest, I knew I was still in good shape from Rio, but was a bit tired from the travelling, so I just wanted to go out with the pacer and see what I could do and that just happened to be 3.55!”

“I went off hard at the beginning to get an inside spot behind the pacer, we went through 800m in about 2.09, so I knew we were running at a decent pace. I knew I had to keep pushing the pace on the third lap once the pacer dropped out and hopefully [I would] be strong on the last lap, and it worked,” she added.

“My main focus has always been the 1500m really,” said the 23-year-old. “I do a couple 800m races every year just to have a change of pace and see where the speed is at, but my potential lies at the moment with the 1500m.”

Muir grew up active, being involved in hockey, karate and tap dancing for example, but when she demonstrated potential in athletics, she moved to concentrate purely on running.

When asked how old she was when she discovered a natural talent in running, she said, “at primary and then high school I would be finishing quite high up in regional cross country races, so about 11-12-years-old.”

But still she did not have a sense that she would turn out to be an international runner. When asked about her heroes, she never really had any.

“To be honest when I was younger I never even dreamed I would be where I am now in my athletics career, so there was not really someone I looked up to and thought I want to be like them because it never crossed my mind that it would be possible!” said the University of Glasgow veterinary student. “But people like Paula Radcliffe, Steve Cram, Seb Coe and Kelly Holmes have all been British distance runners that I have admired.”

Muir wasn’t able to comment on whether she will be competing in the looming cross-country season or in the Scottish Cross Country Championships, which she won last year. She needs to discuss this with her coach Andy Young first.

In 2015 she went on to place fifth in the British championships, then competed in the European Cross Country Championships that took place in Hyères, France, where she placed fourth in the U-23 competition, helping Great Britain win team gold.

Muir is expected to compete in the 2017 IAAF World Track and Field Championships, which will be taking place not far from home in London and the place of her first British 1500m record from July of this year.