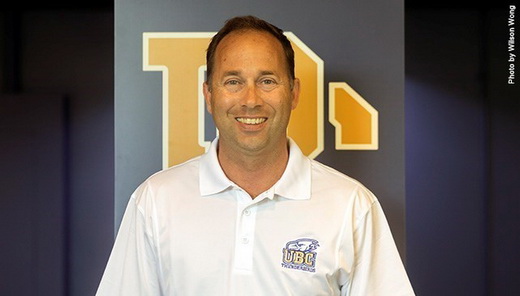 The 2015 Canadian Interuniversity Sport (CIS) Canada West Coach of the Year, Laurier Primeau just accepted the Head Coach position with the University of British Columbia, who compete in the National Association of Intercollegiate Athletics (NAIA). He is leaving the same post he held since 2011 at Trinity Western University (TWU). He was previously the Head Coach with Scottish Athletics, the governing body of the sport for Scotland. He has also held the position as Canada’s Head Coach of the Paralympic Team. Primeau replaces Marek Jedrzejek after 28 years.

Primeau leaves the Spartans at a high ebb, as the women’s team finished second and the men finished seventh at both the 2014 CIS Cross Country Championships and the 2015 CIS Track and Field Championships.

Primeau is a former student-athlete who attended UBC. He competed for Canada in the 400-metre hurdles and the 4 x 400m relay.

Christopher Kelsall: Being a head coach of a rapidly improving team in Greater Vancouver is a pretty good gig on the surface, what made you decide to leave for the vacant UBC position?

Laurier Primeau: It wasn’t without a lot of reflection and family discussion that I decided to apply for the Head Coach job at UBC. The Athletic Department at Trinity Western is remarkable – they have five women’s teams and four of them were top two in the country with one national champion this year. I can’t imagine that there’s another school that can boast that 80% of their teams are CIS runners-up or better! There’s much to be learned from TWU.

I was an assistant coach at UBC for eight years, and I really enjoyed my time as a Thunderbird coach. Along with John Bird, there was also a lot of personal investment in building the Vancouver Thunderbirds Track and Field Club prior to my departure to the UK in 2009, and this collegiate opportunity means that there will be a favourable climate in which to build-out a complete developmental continuum from club to university to post-collegiate athletics. Having a facility on campus is a further benefit that can’t be undervalued.

CK: Did the proposal for a Faculty of Law opening in 2016 and the Law Society’s railing against it due to the code of conduct that prohibits sexual intimacy, have impact on your decision to leave?

LP: My decision to accept the position had everything to do with the opportunities both for my family and for me personally.

CK: What are some of the key benefits to the UBC facility for the sport of athletics?

LP: I’m a big believer in low coach-athlete ratios, but I’m also a bit of a generalist coach. The location of a facility metres from my office is a big change for me, and will allow me to better stagger training sessions throughout the day (keeping ratios low and improving coach-athlete communication). The strength and conditioning facility has 15 platforms and an Alter-G. Anyone who has run through the 1000-acre Pacific Spirit Park would agree that this is one of the best places on the planet to be an endurance runner. And then there are the facilities and services afforded us through the Allan McGavin Sports Medicine Center – this is a huge benefit for our athletes.

CK: Currently the UBC Thunderbirds compete in the NAIA, while the Spartans are in the CIS. Will you have an opportunity to move the team to the CIS and would you want to?

LP: The short answer is I don’t know yet. Consider that Liz Gleadle, Curtis Moss and Inaki Gomez – all 2012 Olympians, came out of the UBC program, and that their events are not offered in the CIS. At the same time, I think that it’s important to be relevant in a Canadian university athletics context.

CK: So it sounds to me like you may want to explore the subject.

LP: I just don’t want to make assumptions about things I don’t completely understand. I haven’t the institutional memory about the NAIA (despite having competed in it as an athlete at Simon Fraser), so I’m neither rejecting nor outright endorsing change until I’ve had time to understand all the pieces.

LP: There will be change by the very nature of the different personalities in the track office. Marek is much more likeable than me, so that will be difficult for some student-athletes. But we also coach different events, and there will be a new leader not only on the endurance side, but also in the power-speed events – I want the transition to be smooth for everyone, but it would be naive to think that’s a likely outcome.

CK: Will you be in Toronto this summer coaching athletes at the Pan Am/Parapan Am Games?

LP: I hope so! Kyle Neilson is currently 10 centimeters out of a spot in the javelin. I think that Dustin Walsh and his guide and Dylan Williamson are in a good position, but selection is not so cut and dried on the para side. I have connections to other athletes through Trinity Western who I think are in pretty good stead – Fiona Benson, coached by Mark Bomba, and Nathan George, coached by Tara Perry, are two who come to mind. I worked with Liz Gleadle and Mike Mason when I was at UBC the first time around and I continue to follow their careers from afar. Their places seem all but assured.

CK: Speaking of Benson, where you surprised by her enormous personal best on May 30th in the 800m?

LP: Yes, and I’m so happy for her! There isn’t a nicer person in world – she deserves all the success that comes to her. Fiona embodies TWU’s Complete Champion Approach! I look forward to the Harry Jerome Track Classic, where she will be racing next!

CK: What are some of your short and long term goals for the Thunderbirds?

LP: I want to see our team participating in community service, excelling in the classroom, and demonstrating excellence in sport.  At a world class institution with such a high global ranking, there is no reason why we should expect anything less from our recruits and student-athletes, nor them from me.