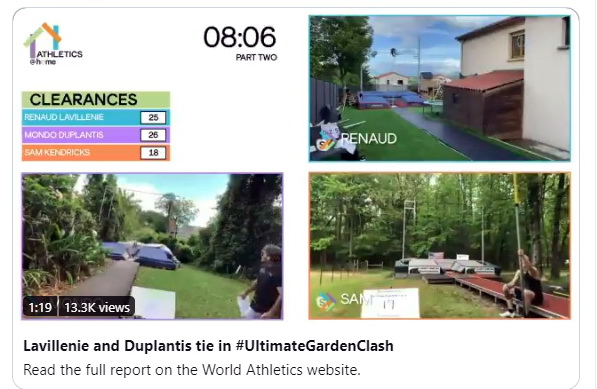 The #UltimateGardenClash was a test of stamina and endurance.

See how they got on👇

The contest, devised by the three pole vaulters, was a race to see who could produce the most 5.00m vaults within a 30-minute period, all from the comfort and safety of their own back gardens. Lavillenie was vaulting from his home in Clermont-Ferrand, Kendricks was competing from his back garden in Oxford, Mississippi, and Duplantis was taking part from his base in Lafayette, Louisiana.

World record-holder Duplantis took an early lead and Lavillenie was not far off the young Swede’s pace. Two-time world champion Kendricks, meanwhile, tried to pace himself from the outset and trailed his opponents in the first half.