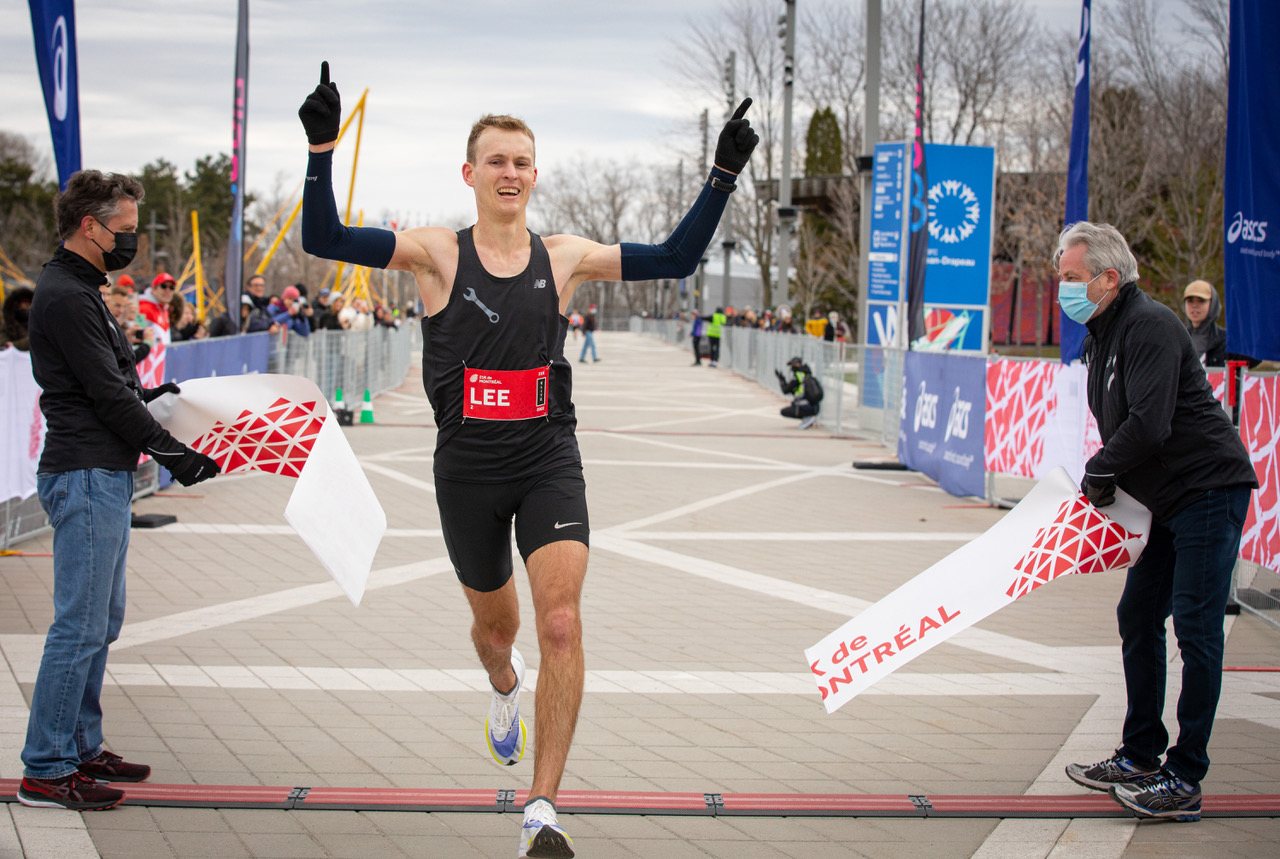 When Lee Wesselius finished second in the 2021 Indianapolis Marathon, it came as little surprise to those who know the runner well. Still, the result left them wondering just how good a marathoner he could be with a little more time to train.

The 28-year-old from River Glade, New Brunswick graduated from the University of Prince Edward Island Veterinary School two years ago and now practices in a region near Kemptville, Ontario, about thirty minutes’ drive south of Ottawa. Between the long hours which can be physically demanding – when delivering bovine calves for instance – he somehow fits in between 170 and 180 kilometres a week.

His Indy result of 2:16:41 was a personal best, a time he hopes to crush when he competes in the TCS Toronto Waterfront Marathon on October 16th. Using Canada Running Series as a focus this year, Lee placed second at the Under Armour Spring Run-Off 8K in early April, then followed up with a victory at the 21K de Montréal later that month in a PB of 64:48. That performance earned him a place on the Athletics Canada team to the NACAC Half Marathon Championships in Costa Rica in May, his first national team. In San Jose he took the individual bronze medal in 1:05:03, leading Canada to the team gold, as his progress continued on an upward trajectory.

“Training has been going fairly well,” he reveals during a telephone chat carefully scheduled on a free morning while home in River Glade. He took the opportunity to visit family in New Brunswick following the recent Canadian 5km championships, where he finished 8th in 14:21. Despite being in the midst of a marathon buildup, that was yet another personal best.

“I have been putting in a lot of good weeks, I had some high mileage weeks. This week was the only low one, partially due to the race. And, I had a little bit of a GI bug which knocked me back a few days. Other than that it’s been a pretty smooth build so far.”

Since completing his undergraduate work at St. Francis Xavier University he has been self-coached, although he admits to checking what accomplished marathoners do via Strava. Most of his training is done alone, however, he sometimes meets up with a group on Tuesday afternoons which includes 2012 Olympic marathoner Dylan Wykes.

Rising sometimes at 5:00 a.m. for his first run of the day, he admits he must be flexible when it comes to planning his workouts.

“The only issue is that I do every fourth weekend ‘on call’. Usually those weekends the Friday night is the quieter one so I try to get the workout in then and just hope I don’t get a call,” he says. “On the weekends, I try to fit runs in the best I can. If I don’t get a call I keep on going and try to get the long run in on that day. You get the odd time where you are five minutes out the door and you get a call.”

Dealing with large animals is physically challenging he admits.

“Usually, any kind of calving those are usually tougher and little more strenuous,’ Wesselius explains. “The other thing is that some cows will prolapse their uterus and that is usually a physically exhausting one to fix; one of the harder ones to deal with. Sometimes you get to the next call and your arms are a little dead and stuff but that’s the nature of the job.”

Wesselius knows he will be in a tough fight to get on the Canadian Championships medal podium – the TCS Toronto Waterfront Marathon, besides being a World Athletics Elite Label race, is also the 2022 Canadian Marathon Championship.

“I guess that really depends on who is there. I know Rory (Linkletter) and Trevor (Hofbauer) are confirmed. It kind of depends on what the other big guys do. I have heard that a lot of others have plans. Certainly if Cam (Levins) shows up that would rule out a podium spot I think.”

The lessons learned from Indianapolis will certainly help when he lines up in Toronto.

“I am hoping to go through (half-way) in 67 (minutes), I am not sure if there is anybody else Canadian-wise who has that a same goal right now.  Rory and Trevor will probably go out in 64 or 65 or so. I am hoping some of the half marathon guys might be around for the first 20k which would help.”

Clearly a personal best remains the target. A podium finish too would be nice. Whether he accomplishes either or not, Lee Wesselius will be pleased to test himself against a world-class field in Toronto knowing his best days lie ahead.

We noticed you're visiting from Austria. We've updated our prices to Euro for your shopping convenience. Use Canadian dollar instead. Dismiss