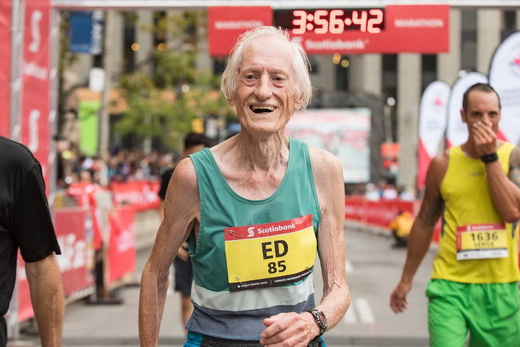 Congratulations to Ed Whitlock on yet another world record.

Ed Whitlock, 85, continues to defy age and to break world records. On Sunday October 16 he beat the world record for age 85+ marathoners with a time of 3:56.38.
-Paul Gains.

He has set several other age-group world records including running 3:08:35, in 2006 which improved the 75-79 age-category.  He then lowered that standard to 3:04:54 on a day when the marathon was stopped after three and a half hours because of high temperature. It is suggested that the latter performance may have been his best and that he would likely have run under three hours if the temperatures were more suitable.

The age-grading formula suggests that his best performances equate to approximately 2:04:00 marathon at his peak, with 2:03:57 being the best grading. Although the grading accuracy is questionable, the older that the athlete gets, Whitlock continues to clearly out-gun previous notions of what age-related performances can be.