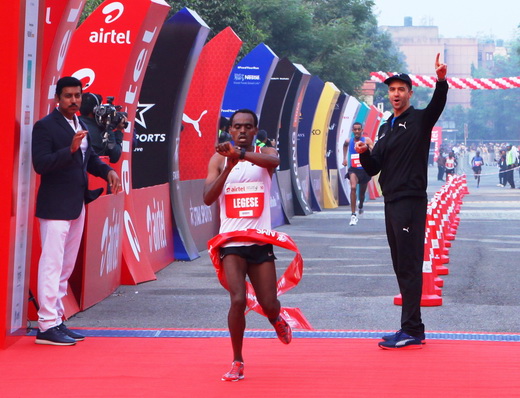 Ethiopian runners Berhanu Legese and Almaz Ayana took the honours at the 13th edition of the Airtel Delhi Half Marathon. It was the 10th anniversary of Airtel as the title sponsor of the race. The athletes crossed the line in the Indian city’s Jawaharlal Nehru Stadium in the time of 59:46 and 1:07:11 respectively to take US$27,000 first prize cheques on Sunday (19).

Legese, now 23, regained the title he won two years ago after pulling away in the final half-kilometre from four rivals. His teenage compatriot Adamlak Belihu followed Legese home and clocked 59:51 on his debut over the distance. Despite having to settle for second, it was still a stunning performance from Belihu who turns 19 on Monday.

Following the two Ethiopians home was Americans in Leonard Korir who clocked 59:52, the second fastest time ever by an American and just nine seconds shy of the US record. Entering the final kilometre, any one of five men could have still potentially won and all five went under the one-hour barrier, with another four under 61 minutes to provide a race of depth and quality.

Ethiopia’s Asefa Negewo went under 60 minutes for the first time, taking more than a minute off his best, when finishing fourth in 59:54 while Kenya’s Jorum Okumbo, still only 19 himself, was fifth in 59:58.

IAAF World Championships London 2017 marathon gold medallist Geoffrey Kirui had his first race since winning his world title but lacked just a little bit of sharpness compared to his rivals and slipped out of contention late in the race before coming home sixth in 1:00:04.

Reigning world 10,000m champion Ayana was making her debut over the half-marathon distance but hardly looked like a novice as she led home an Ethiopian clean sweep of the podium in the women’s race.

Like in the men’s race, the outcome was decided in the final kilometre, as she pulled away from her rivals on the approach to the stadium. Ababel Yeshaneh was second again, as she was in 2016, and set a personal best for the second consecutive year as well, crossing the line in 1:07:19 to slice 33 seconds from her personal best.

Completing the all-Ethiopian sweep, Netsanet Gudeta also set a personal best of 1:07:24 to improve her best by 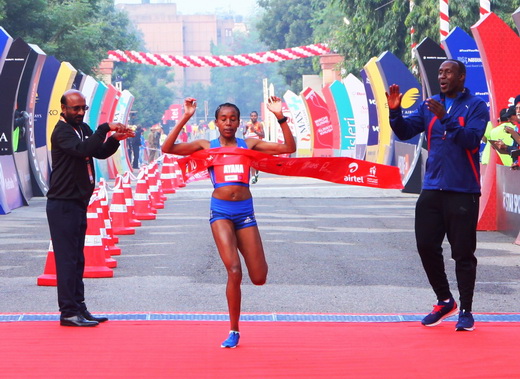 seven seconds. Finishing further down the order, there were huge cheers and delight for Indian international Loganathan Suriya in eighth place. Suriya missed out on medals at the Asian Championships in July when she finished fourth in the 5,000m and 10,000m and failed to secure a place in the Indian team going to the world championships the following month. However, she got partial compensation for those disappointments when she finished in an Indian half-marathon record of 1:10:29, improving the record set by Lalita Babar in the Airtel Delhi Half Marathon 2015 by 33 seconds.

Her performance should be good enough to secure her a place on the start line of the IAAF World Half Marathon Championships in the Spanish city of Valencia next March, which would be her first global championship outing As the only IAAF Gold Label Road Race in India, the Airtel Delhi Half Marathon can rightly claim to be the nation’s top distance running event and it has secured its place as one of the most prestigious half-marathons in the world with a total prize money purse (combined men and women) of US $284,000.