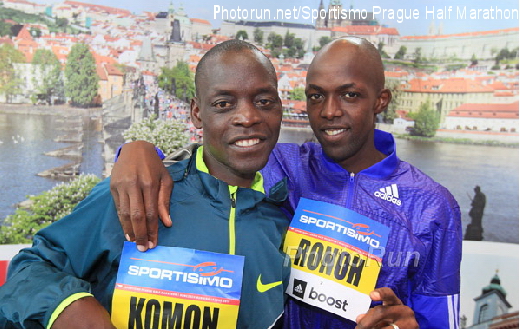 Leonard Komon is ready to produce something special at the Sportisimo Prague Half Marathon. The Kenyan, who is the world record holder at 10 and 15 k, will run only his second race at the distance on Saturday. Featuring a personal best of 59:14 which makes him the fastest in Prague’s elite field Komon’s goal is a world leading time of sub 59 minutes. Four more athletes who have already broken the prestigious one hour mark are on the start list while another seven feature personal bests of sub 61 minutes. The women’s field is equally strong with eight athletes in the field who have run faster than 70 minutes. Kenya’s Lucy Kabuu heads the list with a PB of 66:09.

The Sportisimo Prague Half Marathon marks the start of the Run Czech Running League 2015, which features a total of seven high-quality races throughout the Czech Republic. Among those is the Volkswagen Prague Marathon on 3rd May. Demand for Run Czech races is extremely high. All 12,500 bib numbers for the Sportisimo Prague Half Marathon, which is an IAAF Gold Label Road Race, were sold out before the end of last year.

It was in Berlin last year that Leonard Komon ran his first half marathon, winning the event with an unofficial world debut record of 59:14. Asked about what he learnt from the Berlin race he said: “It was a very good experience. I realised that it is not difficult to run a fast half marathon when you prepare well for it,” said Leonard Komon, who has prepared thoroughly for the Sportisimo Prague Half Marathon. “I already started training for this race back in November,” the 27 year-old said. Saturday’s race will be his first this year and his main one in the spring.

After a disappointing marathon debut in Eindhoven last autumn the 10 k and 15 k world record holder, who ran times of 26:44 and 41:13 at these distances, has postponed a marathon career to some time in the future. He ran a modest 2:14:25 in Eindhoven in October. “For now I will concentrate on the half marathon distance. I want to find out what is possible for me in this event,” said Komon.

“On Saturday I want to improve my time. It is my goal to run something below 59 minutes,” said Komon. While the current world leading time is 59:20 the course record of the Sportisimo Prague Half Marathon stands at 58:47 from Ethiopia’s Atsedu Tsegay.

Leonard Komon lives in Eldoret, but originally the runner comes from Mount Elgon which is very near to the Ugandan border. There are no training camps in this area, but Komon still pursued a career as long distance runner. “I started running in primary school and in secondary I realised that I have some talent,” recalled Komon, whose idol was Paul Teragt. “When I was at school I heard about him on the radio and I followed his career.” While Tergat was a major inspiration Komon became very successful himself. “I have done it partly, but there is still something to do in my career,” said Komon.

A victory in Saturday’s Sportisimo Prague Half Marathon would further strengthen Komon’s status as one of the finest road runners in the world. However, he will be facing high class opposition. Among them is fellow Kenyan Geoffrey Ronoh, who caused major upsets last year when he won the Mattoni Olomouc Half Marathon and the Birell Prague Grand Prix 10k. Ronoh sustained a back and hip problem during the Egmond Half Marathon in January, where he dropped out. “But I got good treatment and was able to resume training relatively quickly. Maybe my form is not yet quite as good as in 2014, but I realised during my final training sessions before coming here that my shape is fine,” said Geoffrey Ronoh.

After losing her passport and not being able to get a visa in time double World Marathon Champion Edna Kiplagat was unable to travel to Prague. In her absence compatriot Kenyan Lucy Kabuu occupies centre stage. Featuring a personal best of 66:09 she is among the fastest half marathon runners ever. Kabuu showed fine form earlier this year, when she took third in the Dubai Marathon with 2:20:21. “After Dubai I took a week off and then started training again. Unfortunately I lost my father last month which has affected my training,” said Lucy Kabuu.