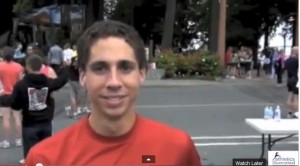 Cameron Levins, who competes for NCAA Division 1 Southern Utah University, won the January 27th University of Washington’s Invitational Indoor 5000m race and set the meet record time of 13:41.90. He followed that performance up with a come-from-the-back-of-the -pack win the next day in the 3000m event, finishing in 7:48.25.

Levins took a few minutes of his time to discuss his recent training.

Christopher Kelsall: Congratulations on the double at the University of Washington Invitational. Going into the 3000m race, the very next day with Chelanga and company, did you think you could be in the mix to win? Were you surprised?

Cameron Levins: I certainly believed I was capable of winning, but I wasn’t really sure how much I would be affected from running the 5000m the night before. I think I was perhaps most surprised by how relaxed it felt to run that pace. I am excited to try a 3000m with totally fresh legs.

CK: Your move through the field appeared to be well calculated, consistent and even in effort. Did you make that move by feel?

CL: I planned on going out a bit conservative, but I ended up a little farther back off the start than I wanted. So I was careful not to rush back to the front too quickly. I just made sure that I felt relaxed the whole time and not to push so early in the race.

CK: There is plenty of talk about your 155 mile weeks during the off season. What do those weeks look like?

CL: I actually try to keep that high of weeks throughout the whole season except when I am approaching championship races. I generally try to set them up as four 25-30 mile days a week, two 20 mile days each week, and one 10 mile; I do either three, two, or one run a day respectively. Recently, we have been experimenting with putting more quality into that mileage though so I have been averaging about 130 miles a week while I adjust.

CK: Quality as in running at your anaerobic threshold?

CL: I mean that we are trying a lot of different types of workouts in place of essentially easy runs. Some of them involve pushing the anaerobic threshold, but we are definitely doing a variety of different workouts as it’s so early in the season.

CK: Have you found that because of your good volume of mileage you can include a higher volume of quality when you are closer to racing, compared to before?

CL: Yes I am trying to do harder workouts more frequently through the week. With three runs a day I am trying to make it so more runs have a purpose other than just recovery pace.

CK: I assume that must be the next step. I mean you cannot keep running more and more volume each year, eventually you  need to have more purpose, as you say. So have you hit the ceiling on your quantity?

CL: I plan on running more eventually, but I am still busy with university so it’s tough to add more time running during the week. I will be looking to increase both quantity and quality in combination over the coming years.

CK: What are your goals for this spring? 5000m is your main focus, yes?

CL: At the moment the 5000m looks to be the focus. I would like to run a fast 1500/mile but mostly just for the purpose of speed. However, I don’t really know how fast I can run a mile right now so I haven’t necessarily given up on it as my main event.

CL: I am very excited to find out what I can do in the 1500m because I know I am a lot faster than my pr indicates. I am just chasing Olympic standard at this point in the 5000m. Obviously that means I have to run under 13:30 to get that time, but I am looking beyond that as I try to, ideally, get “A” standard.