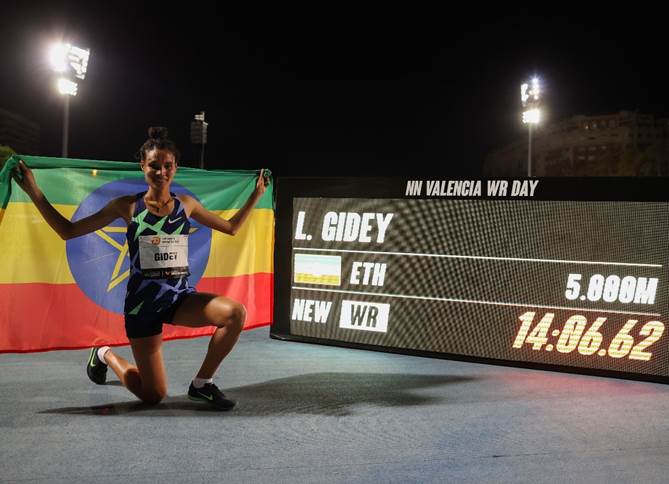 Letesenbet Gidey ignited the NN Valencia World Record Day with a spellbinding performance to obliterate the women’s 5000m record by more than 4 seconds margin and record a stunning 14:06.62.

Aided by pacemaking duo Esther Guerrero and Beatrice Chepkoech and the Wavelight technology, the 22-year-old Ethiopian produced a beautifully judged run to destroy the world record of her compatriot Tirunesh Dibaba.

Running in a temperature of 22c inside the Turia Stadium, Letesenbet hit the 3km checkpoint in 8:31.85 – well ahead of her target time – and running with her trademark rhythmic flowing style she would not be denied.

Just after 3km she put in a scintillating lap of 66 seconds and looking untroubled and composed the stylish World 10,000m silver medallist romped to her place in history.

“I dreamed for this record for 6 years, I want to thank Valencia for giving me this chance.”