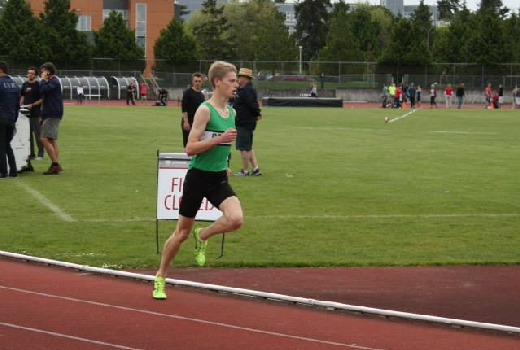 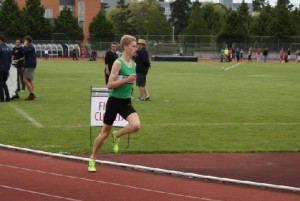 The Thunderbirds are located in Cedar City, Utah. Cedar City is located in south central Utah at 1767 metres elevation with nearby mountains reaching to nearly double that height. The town has a population of just a little less than 30,000 residents. The university is well-known as the school that 2012 London Olympian, Cameron Levins attended. Levins and Kennell are both from Vancouver Island.

Kennell has one season of track remaining in high school. He currently attends Oak Bay High School, which is steeped with a long history of producing winning teams in the sport of athletics, mainly due to the leadership and recruiting talent of Vice Principal and Coach Keith Butler.

Christopher Kelsall: Apparently you have chosen to attend Southern Utah University for the 2014/2015 season.

Liam Kennell: Yes, after a lot of thought and research into it, I have decided to attend SUU.

CK: What made you choose SUU?

LK: Many aspects of SUU intrigued me. One being that they have had great past successes such as 2006 3rd place NCAA cross-country runner Jesse Baumgartner and the 2012 Bowerman award winner and two-time NCAA champion Cam Levins. Another aspect that really interested me was the school is situated at 1800 metres elevation and at the same time I will be able to train at over 3000m and 900m in a matter of a half hour drive.

Also Coach (Eric) Houle really made me feel that it is a positive thing to dream about going to the Olympics and doing your best. Yet, one thing I really like is they have a young team looking like they will only get better, such as fellow Canadians Mike Tate and Ibrahim Ahmed.

CK: What will your undergraduate degree be in?

LK: I will be going in the direction of the sciences, as of right now my plan to take exercise science and looking into kinesiology.

CK: Are you a bit of a biology geek in high school?

LK: Ya, I have always really enjoyed learning about the human body and its limits since I was really young. For my 14th birthday I got a muscular systems poster, which still hangs on my wall.  I also really like the subject because it ties into my athletic lifestyle.

CK: Was Keith Butler your coach at Oak Bay?

LK: Yes, Mr. Butler was my coach at Oak Bay from grade nine to ten. He decided to take a year off of coaching to become my Vice Principal last year, but has now come back and is helping at UVic and coaching me as well, which is really great for my senior year!

CK: I assume he must have tried to recruit you to UVic – which you have to admit has a good tradition of competing at a high level.

LK: Mr. Butler actually did try and get me to go to UVic, but he also wanted me to go to the best school that fitted me. He gave me some great information I could use to my advantage. However, it was a hard choice not going to UVic because of their extremely strong middle-distance group as well as I feel like I have made some really great friends and training partners from there.

CK: You started running at a young age. If I remember correctly, you were competing in cross-country in grade three, yes?

LK: Yes, grade three was when you could start and sign up for school cross-country and I am pretty sure I was the first one in line. I come from a very active and athletic family so I always just wanted to be like my parents. My mum runs a running and health club, so when I was really young instead of getting a babysitter I would just go with her and have fun running around and doing plank competitions with adults.

CK: Did you win often?

LK: I did win often. I believe I lost only a couple in elementary and middle school. However, I remember the first time I got really beat by someone my age when I was 14, by the talented Oxland twins who at that time had about three inches on me. It was great because it gave me something to strive towards. Just like today I know there is someone always faster than me and my goal is to always get closer until I overcome them.

CK: What other sports were you into?

LK: My first sports were baseball and lacrosse. I stuck with lacrosse from seven to 14 years old then everyone got big and I just stayed skinny. I also played soccer and paddled in a club for about three or four years. However, running was always my favourite just because of the different feeling it gives me when working out and racing as well there is an appeal to it is an individual sport.

CK: Your parents are very active. Your father was a good runner and at one time a pro cyclist. Your mother has raced some marathons and she coaches now. Were they a big influence on your running?

LK: My parents are a big influence in my running but also my life. They always wanted me to try lots of different things like art, languages and sports. They did not let me join a track club until the age of 15 because they did not want me in an organised training program until I was a bit older, which I think really helped me become a well-rounded athlete. I am really lucky to have parents who were so good at sports when they were younger. My dad also had really good leg speed in soccer and my mum has crazy endurance (she has raced a 50 miler and many ultras) and was a really good triathlete.

CK: Rumour has it that there may be another BC runner who you currently compete with that is thinking of attending SUU, any truth in that?

LK: I have heard that Nathan Wadhwani is looking into going to SUU. That would be great because I know how talented he is as a runner and would only make SUU stronger.

CK: You have competed very well in cross-country, narrowly missing the BC high school championships to Nathan Wadhwani. Do you enjoy cross? Or do you prefer track?

LK: BC High School was really fun, I was a pretty upset when I came down with a chest cold the week before, yet it was still a great race. I have always loved cross-country because it is such a tough and painful event and truly shows someone’s grit. However, I feel like I am a track guy because I can use my speed more as an advantage. Also, my form just feels more natural on a hard surface like the track.

CK: What are some of your other activities outside of school and racing?

LK: I am pretty busy most of the time with school and training, so really not too much other than hanging out with my training partners. I don’t party or any of that kind of stuff so pretty much sleep as much as I can when I can.

CK: What distances do you hope to specialise in, at SUU?

LK: Right now I am a middle-distance guy, but I do plan on moving to the 5000 metres sometime in the future. However, I will wait and see how I develop as a runner. I am kind of a late developer physically so I will just have to wait and see what fits me the best.

CK: What are your goals for your final high school track season?

LK: I have many goals for my final high school track season, but the short answer is, I am aiming to win both the 1500 and 3000 metre events at provincials and make the world junior team. Since competing at world youth the past summer I realized I have a long way to go but it only means there is so much more to learn and develop.