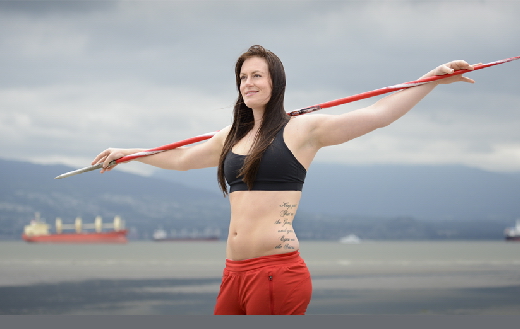 Liz Gleadle of Vancouver is Canada’s all-time most accomplished athlete in the javelin event. She holds at least 15 of the best performances nationally. Her Canadian record is 64.83-metres, which put her top-10 worldwide in 2015.

Gleadle competed in the 2012 London Olympic Games, where she made the finals. At the 2014 Glasgow Commonwealth Games she finished in a respectable fifth place. During 2014 she won Birmingham Diamond League Grand Prix meet against some of the top athletes in the world and she won gold in the 2015 Toronto Pan American Games.

Gleadle now has her sights set on the 2015 Beijing IAAF World Track and Field Championships that start on August 22nd.

Christopher Kelsall: In your bio on your website it is written that your parents put you in every sport possible. Which were your favourite?

Liz Gleadle: Probably basketball, but I was pretty skinny in high school so I got pushed around too much to be effective, ha-ha.

CK: You played fast pitch at a high level, so did you switch to the javelin because you saw that the event would provide an opportunity to compete at a higher level?

LG: Not really – I had a hard time mentally with team sports. If I messed up, I felt bad. If someone else messed up, I would get frustrated with my teammates. I think I saw track and field as a way to have teammates, and to have support, but to be able to be in control of the outcomes of your competition.

CK: As a pitcher, you release underhand, and overhand in javelin. Are the two somehow complementary?

LG: In both sports, the arm moves as a result of the power created in the lower body. The push off the pitcher’s mound, driving the hips from right side to front, and letting the arm come through as a result probably helped me pick up throwing javelin so quickly. Being “patient” and leaving your arm behind to create the longest pull possible is important.

CK: Let’s go through a throw. When you get to the point where you have planted your foot and are releasing the javelin. Can you tell that as soon as the javelin leaves your hand that it is or isn’t a great throw?

LG: I know – I can feel if the throw is clean (release at an optimal angle, and putting the force through the point of the javelin), and if I was able to avoid power leaks (for example, a bent left leg on the block). Then the rest is up to the wind.

CK: Do you play golf?

LG: Ha-ha, I have but just at a fundraising tournament I was invited to. I have a hard time sticking to anything else on top of javelin that requires a lot of time to hone in on technique.

I love playing music (I played viola and guitar) but once I got into track, I found I only had the patience and attention span for one technical endeavor at a time. I’m a perfectionist, and it bothers me to only half-do something. I’m sure I’ll pick it up again once I’m done javelin!

CK: Your event appears to avoid the performance enhancing drugs controversy that is plaguing the rest of the sport. Do you think javelin throwers are historically clean?

LG: I’m not sure. I actually had a discussion about this at breakfast with some teammates. I don’t think you need to be really strong to throw a 600g javelin, it’s more important that it’s thrown at the right angle with as few power leaks as possible. That being said, it’s a highly technical event, and to be better, you need a lot of reps. If you can recover faster (by taking some PED), then you can have more practices, more reps, and get better technically.

I practice a lot, but I take my recovery seriously and do everything I can with sleep, nutrition, and active recovery to keep up with the work load. Recovery is the most time consuming activity outside of training, and I don’t think many non-athletes realize how key it is to success.

CK: Do you play with throwing in your down time? Or is down time all about muscle and connective tissue repair?

LG: Nooooo – off time is off time! During the winter we throw up to nine times between Monday and Friday. I need to do other things to keep sane, and not feel like a one trick pony.

CK: Do you listen to music between throws? If so, who is on your playlist?

LG: This changes up a lot – I always blast music at practice. It really depends on my mood! I’ll have days where its electro, others with country, or classical music (often theme music from soundtracks – Batman Begins, Eptesicus is awesome). Or sometimes if I’m feeling lazy I’ll just throw on top-40.

CK: Eptesicus is a breed of bats.

LG: (laughing) I didn’t know that! Maybe subconsciously I did, and was thinking about things that fly you know bats… javelins…

CK: Speaking of bats and javelins, the top athletes seem to be older when they hit their best. Mental maturity must play a large part in performance, yes?

LG: I think people get better as they get older, because they have more throws under their belts. That being said, I’ve talked a lot of the other girls on circuit, and when I tell them how often I throw, many are shocked. I think if I continue at the rate I’m going, I’ll have a heck of a lifetime best. I think being mentally prepared to compete is essential: I do a lot of prep for events, everything from envisioning what a throw will feel like kinaesthetically, what the stadium will look like, smell like, how hot or cold it might be, what my competitors will be doing, what the call room process will be… they’re all important things to help you be at your best. If you can walk into an Olympic final, and feel like you’ve done it hundreds of times, because you’ve prepared for that moment, then you’ve got a better chance. I think one of the most important aspects to envision is success, and believing it’s possible.

CK: Do you visualise a 70m throw in your future?

LG: Absolutely. I’m one of the slowest and probably weakest throwers on circuit. But I’m 6’1 and I have a wicked arm. I can work on being faster and stronger, but other people can’t get taller. Or they’re already in great shape. I think I’ve got a lot of room to improve, and I’m looking forward to people not telling me “You know… you’d throw it a lot faster if you sped up your runway”. I know. I’ll do it when I’m good and ready.

CK: Take me through the call room process, the energy and tension, moments before competition starts.

LG: I generally just do my warm up – dynamic exercises, breathing exercises, visualization, and active yoga stretching – and then head to the call room ready to go. I normally have my numbers on already; I like them straight, and it’ll bother me if someone else puts them on off-kiltered. I find the women in our event really relaxed and friendly for the most part. We’re all there to win, but most people genuinely like and respect each other. I can’t get too intense; if I do, I seize up, and my technique falls apart. I just try to stay focused, yet happy and relaxed. Everyone has their own way of competing though!

CK: How was your move to Lethbridge for your career? There must have been an adjustment coming from busy Vancouver to sleepy southern Alberta? No sushi in the coulees?

LG: It was a shock to the system for sure. I remember when I went out to explore the morning after I got in, I drove downtown and absolutely nothing was open because it was Sunday. And then on my way back to the house at which I was staying, a tumbleweed literally rolled across the road! I thought “WHAT HAVE I DONE??” But the university there is a great place to train – we have an indoor throwing area, an indoor track, and great gym. It’s conducive to training hard and throwing far. I’ve made some great friends, and learned a lot about what I’m willing to do to succeed.

CK: You made the finals in the 2012 London Olympics. The Beijing World Championships are coming up in less than two weeks. Recently you beat some pretty big names in Javelin in the Birmingham Diamond League meet. What are your goals for worlds?

LG: My goal is to win. I don’t think it’ll be easy, and I’ll need a personal best to do it, but I think I have a good chance. I’m in great shape, and I’ll have had several weeks of training camp with my coach to brush up on technique. I’m due for a big throw, and I’m aiming to hit it in Beijing.

CK: Performance-wise what will it take for you to challenge for a medal at worlds?

LG: I think I’ll have to have my best throws in my first three of six. I’m a consistent thrower, but mentally it’s a lot easier to get through a competition when you start it off with a bang. That way there’s no way of you getting in your own head, or worrying about earlier throws. I used to have a habit of “winning the warm up”, so I stopped taking any hard throws before the competition to make sure I didn’t waste them. I try to go into my first throw being as relaxed as possible, patient in leaving the arm behind, and letting my legs do the work!