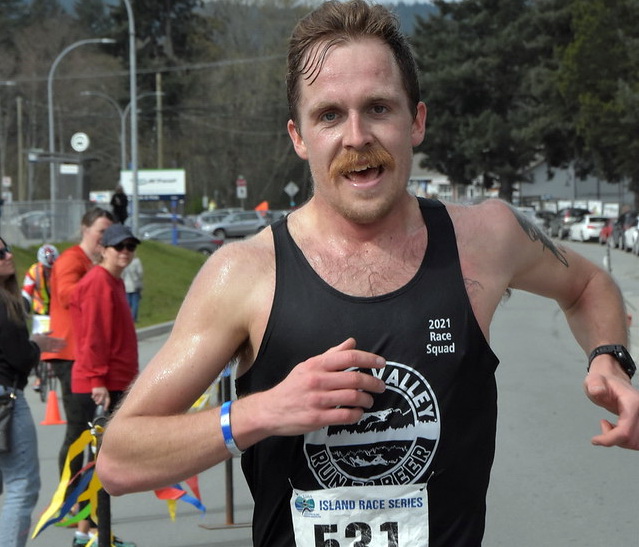 Courtenay’s Logan Roots and Victoria’s Christine Bant won the Westcoast Sooke 10K on Sunday. They finished the hilly out and back race in the time of 32:37 and 37:59, respectively.

Roots, training for a spring marathon, raced hard in the middle of a 35-kilometre day. The Run to Beer club member ran the Cobble Hill 10K winning it in the time of 31:56 in January. More recently he ran a 69:22 half-marathon in Vancouver to set a new personal best at the distance.

Roots is training for the Eugene Marathon taking place in May in Oregon. It will be his debut at the distance.

“I used the race as a workout in my marathon strategy and just made sure I fuelled well.

I am looking forward to attempting about a 2:25 down there and finishing in the new Hayward Field,” said Roots.

The 28-year-old former Victoria resident, being in the military, has over the past five years has lived in Whitehorse, Winnipeg, Kingston, and is now in the Comox Valley.

Finishing in second was Jim Finlayson. He clocked a finish time of 33:12. In the process not only winning the 40-plus masters division but the 50-54 division as well. Jerry Kooymans owns the national 50-plus record at 32:58 set in Toronto in 2006. Considering the rolling nature of the Westcoast Sooke 10K course, Finlayson should better the current record handily, perhaps at the TC10K happening Sunday, April 24.

Finishing third was Nick Walker in the time of 33:27.

Christine Bant just narrowly slipped in under the 38-minute benchmark with her 37:59 finish time for the win. Andrea Wilson took second and was the first master winning her 45-49 age-group with a 39:28 performance to lead her Comox Valley Road Runners Club across the line. Emily Tresidder clocked a 39:55 time for third.

“This was my first time running this race and it was hard. I didn’t know about the hill,” said Bant.

Bant also won the Comox Valley Half Marathon on March 13th finishing at 1:25:15.

Three hundred and 32 runners finished the Sooke 10K race, the second-to-last fixture in the Vancouver Island Race Series. Next up is the finale, the Bazan Bay 5K happening Sunday, April 10.