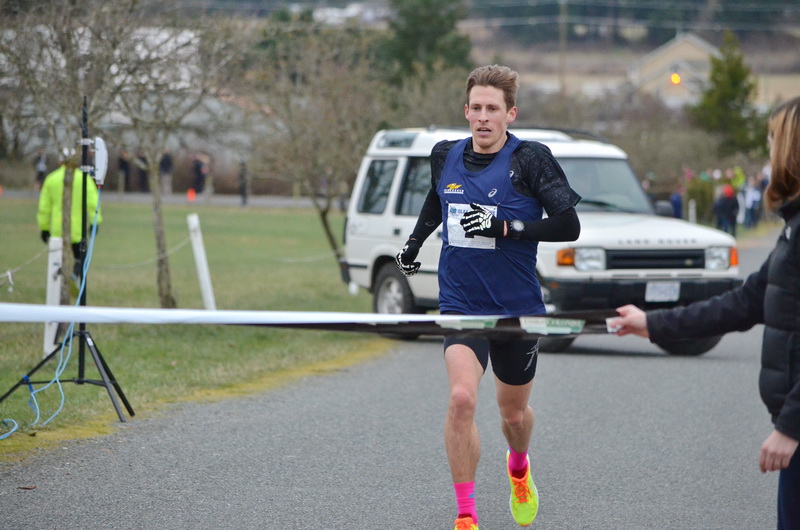 Bruchet finished in the time of 23:24, just six seconds from Jonathan Brown’s course record of 23:18. Bruchet and fellow Vancouver area athlete Justin Kent were together through the first kilometre; however, Bruchet, grew his lead as the race progressed and was well ahead at half-way. Kent finished second, while two-time winner Geoff Martinson, who is a former UVic Vike, but is currently attending UBC to become a pharmacist, finished third.

“I haven’t been training as much because of school commitments and the workouts haven’t been as good just because we have had snow and ice in Vancouver this winter,” shared Martinson.

Bruchet echoed those thoughts, “we haven’t been able to train with the same quality due to the snow.”

Bruchet competed in the 2016 Rio Olympic Games in the 5,000-metre distance and owns a personal best time of 13:24.10. Asked how the race went versus his expectations he said, “It was a bit of a rust-buster, but it went well. Coach said to run hard just to see how thing go.”

Rio Olympian Chris Winter – a 3,000m steeplechaser from Vancouver – was in the race too, however, he has since retired and just runs 80K per week. He finished fifth overall in the time of 25:07. Vancouver’s Theo Hunt and Winter were neck and neck to the finish and Hunt, metres from the line, pulled ahead and is credited with the time of 25:06. Kent, who has steadily improved over the past six months, was credited with a finish time of 24:06.

Asked about his steady improvement Kent said, “Just being in the group and the attitude we have has made a difference.”

Kent, Bruchet and Hunt are part of the Vancouver-based BC Endurance Project.

In the women’s race, Cliff grabbed the lead early and maintained it throughout the race to finish in the time of 26:51. The event and national record is held by fellow Vancouver runner and Rio Olympian Natasha Wodak at 25:28. Wodak did not compete due to post-surgery recovery.

“It was good. It has been difficult to get in the proper training with all of the snow and ice, but it was a good effort and I consider the race a rust buster,” shared Cliff.

Cliff ran the 5,000-metre distance this past summer in the time of 15:23.94, which was fast enough to make Team Canada to compete in the Rio games, however, was not chosen to go, which was the subject of much controversy this past summer.

Hilary Stellingwerff who did compete in the Rio games finished in second place. She has also retired from international track and has now moved into road racing. The Pioneer 8K was her first road race under a new training program. “I was a little slower than expected, but the higher volume training I am doing is new and I wanted to race to get used to the longer distance,” shared Stellingwerff, who plans to race the First Half 21.1K on Feb 5 in Vancouver.

Stellingwerff was credited with the time of 27:51.

The third place finisher was Jen Millar who crossed the line in the time of 29:21.

The top junior runner was Josh Kozelj, who finished in 25:34. The second place junior was Tyler Dozzi credited with the finish time of 2608. Dozzi spent December at home in Terrace, so also did not get in ideal training, however, he ran a very respectable time for eighth overall. The national cross country champion and Oak Bay High School student is now fielding offers from various universities.

“I went home for December and ran in the snow quite a bit, up there,” said Dozzi.  Asked about which university he has decided on he said, “I have a few school visits to make coming up, so I haven’t made any decisions yet.”

Bailey Haugan from Fort St. John was the top junior female. She crossed the line in the time of 30:19. Justine Stecko, who trains with the PIHYT was second, while third was Olivia Willett. They finished in the time of 31:02 and 32:59, respectively.

Two-time Olympian Bruce Deacon won the masters race. For the first time in several years he put up an all-out effort that saw him collapse at the finish line. Deacon is now racing in the 50-54 age-category and bettered athletes who are racing in the 45-49 age-group including Craig Odermatt who was second and Jim Finlayson, a former winner of the event, who had an off day for third.

The top three female masters were Victoria’s Heather McDonald, who trains with the Island Striders, who finished in 29:37. She beat her coach, Marilyn Arsenault, who just managed to squeak under the 30-minute barrier with her 29:59, while the third master was Nicki Haugan of Fort St. John who finished in 30:54.

The Pioneer 8K is the first road race of the year in Canada and the first race of both the Vancouver Island Race Series and the BC Super Series.

Full results are available at: www.racedaytiming.ca