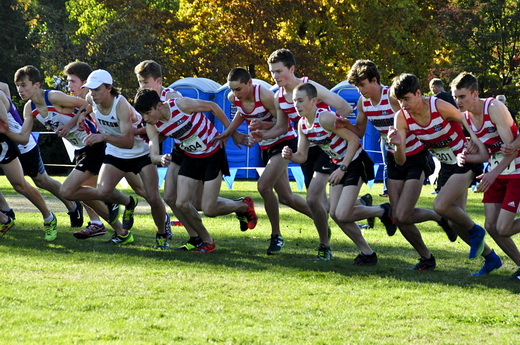 Vancouver Olympians Lucas Bruchet and Natasha Wodak demonstrated professionalism and elite fitness Saturday during the 2017 BC Cross Country Championships in Abbotsford at Clearbrook Park. They both won their respective races, Wodak in the 6K senior womens race, Bruchet in the 8K senior mens race.

The dry and warm conditions made for a fast course, which called for short spikes in a race that favoured road runners.

“Usually, by this point, I have numb fingers and can hardly type,” said one staff member at the timing company. “This is quite warm; it must feel hot for the runners.”

In the men’s race, a pack that included several Vancouver-area runners hung with Bruchet before he cranked the speed up a notch, spreading the field in the process.

“I wanted to go for it. I am feeling fit,” shared Bruchet, who competed in the 2016 Rio Olympic Games. “It took a while to get going again post-Olympics, but I am ready to race nationals in Kingston in a few weeks.”

Throughout the race he pressed the pace, spreading the field more each lap.

“He is very fit right now. I have done some workouts with him and I know how fit he is and know that I can’t keep up with him,” said Theo Hunt, who had a strong showing finishing sixth overall.

The top-five was rounded out by De Jong and John Gay. Surprisingly, a top three favourite Declan White finished seventh.

Wodak won handily, after starting in a pack with Sarah Inglis and Rachel Cliff. The three ran approximately 4.5K together before Wodak pulled a Bruchet and spread the field.

Inglis, known to be the one to draw the field out with big starts, didn’t attempt the move today. Last year, she ran well out front from the gun.

Inglis will be racing the Monterey Half Marathon with Wodak on Nov. 12 in Monterey, California. Wodak will be following up that race with the national cross country championships two weeks later.

Wodak finished in 18:38.04 over the near 6K course. Inglis was eight seconds back at 18:46.33, while Cliff crossed the line in 18:52.90. Lisa Brooking had a strong race and an improvement from a tough outing at the GoodLIfe Fitness Victoria Half-Marathon on Oct. 8.

“Yeah, I am really happy with the improvement. I feel much better out there,” said the recent recruit of the BC Endurance Project.