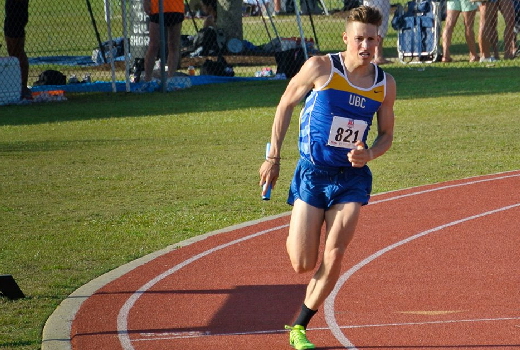 Lucas Bruchet is a 23-year-old competitive distance runner based in Vancouver, BC. He trains under Coach Richard Lee with the British Columbia Endurance Project (BCEP) and is a former University of British Columbia Thunderbird.

During his final collegiate track season, which was the 2012 and 2013 school year, Bruchet made advancements as an athlete, after having struggled during his first few years with injuries. Bruchet won the 1500m and placed fifth in the 5000m at the North American Intercollegiate Athletics (NAIA) Championships. He met the standard in the 5,000m to compete in the 2013 World University Games.

Since graduation, he has moved primarily to the 5,000m distance and achieved a new personal best of 13:33.2 at the Payton Jordan Invitational track meet. A month earlier he tested his prowess in indoors in Boston, Mass at the New Balance Grand Prix by running 7:56.33. A month before that he ran two different meets at the University of Washington, where he ran 7:54.57 and the mile in 3:57.71.

Christopher Kelsall: Are you a lifestyle runner? Meaning regardless of achieving goals, would you still run as your main form of exercise?

Lucas Bruchet: I do think running would be my main form of exercise, regardless if I was competitive or not. Although I’m sure if I hadn’t been running my whole life my answer could be quite different. I would like to think I’d be out on the court throwing down dunks.

CK: Throwing down dunks, eh? What sports did you play while growing up in Vancouver?

LB: When I was a young gun I pretty much played every sport: Soccer, baseball, hockey, basketball, swimming, tennis, and the obvious, running. Once I hit high school lots of them were cut out, but I still played baseball and basketball until the end of high school. Unfortunately I wasn’t offered any dual scholarship for University so my multi-sport stardom was denied quite early on.

CK: What positions did you play in hockey, soccer and basketball?

LB: I was a very versatile young athlete I mastered many positions. Just kidding! In hockey I played any of the forward positions. And soccer I tried to exploit my running talents by playing forward, although my inability to hit the broad side of a barn with a soccer ball cut my career short. Basketball was the sport I played longest and most serious before solely focusing on running. One of my biggest athletic goals aside from running is dunking the basketball on a regulation hoop; unfortunately white men cannot jump very well…yet.

CK: So it sounds like you took basketball pretty seriously.

LB: Yes, I took basketball pretty seriously. In grade 10 I was invited to the provincial team super camp. But that was the spring were I chose running over other sports. I never really saw myself pursuing a scholarship in anything other than running.

CK: Do you come from an athletic family?

LB: Oh yeah! Both my parents played lots of sports growing up. My dad’s main sport was baseball, while my mom’s was swimming. My brother and I both played everything growing up. I was fortunate to share a few years on the UBC team with Jake (brother).

CK: You won the 2013 Canadian Cross Country Championships and have run very well over 5,000m. Do you have a preference between the two and how about the road?

LB: It’s hard to say if I have a preference between either track or cross country, there are aspects of both that I really enjoy. In XC I love the variation; no course is the same. One day you could be flying on flat, dry grass and another day on that same course you could be trudging through mud in the pouring rain. Track is exciting because you often have a good group of athletes all looking to run the same time so there is some good racing. And I love that last 200m of the race, trying to kick down everybody or hold the lead.

As of now in my career I have not had the opportunity to run on the road. However, now that I’ve graduated, I won’t have an obligation to the varsity teams and this fall I will test my fitness in a few road races.

CK: Regarding loving the final 200m of a race, so do you prefer to sit and kick?

LB: If only I had the wheels to sit and kick every race! I can’t say I prefer to sit and kick as it doesn’t always work. The higher the quality of the races you enter, almost everybody is capable of running a similar last 200m. I like when the pace gets going near the start, then it really just comes down to who has the most balls the last bit of the he race.

CK: On roommate and training partner Kelly Wiebe having that awful virus, have you tortured him with video shooting and silly accents? If so, would you consider this effective motivational therapy (as if he will need it) for once he is fully healthy to train again?

LB: Hah! I have not done any Wild Kelly videos lately, even though the public cry for them is huge! I’m sure they would have cheered Kelly up a bit, but it never really crossed my mind. I’ve actually acquired a GoPro camera recently so a Wild Kelly feature film could be on the books in the near future.

LB: Yes I was quite pleased with the time. The goal going into the race was to run somewhere in the 13:30’s, with the thought in the back of my head that if I had great run I could sneak under Athletics Canada carding standard (13:34.78).

After the Canadian Cross Country Championships in November we thought that I may have an outside chance of making the Commonwealth team, but that was before they released the standards. However, once the standards came out (13:15 and 13:20), the thoughts changed. In my personal opinion I think the standards for the middle distance (800m-5000m) we’re quite ridiculous. It’s unfortunate that this team wasn’t seen more as a development team as it would have benefited a great many young athletes.

My immediate goals are to finish this track season healthy with just a few races remaining. After the 5,000m at nationals, I look to finish up with a few quick 1500m races at NTL meets and maybe an 800m appearance at our Provincial Championship to finish off the track season.

CK: Would you suggest that the Commonwealth Games should be considered more of a development meet than true international championships? Is this event where rising stars should gain international competition?

LB: You cannot compare the Commonwealth Games to the other ‘big championship meets’ (Worlds & Olympics). In terms of participation, there are a significantly less number of countries participating. I think the Commonwealth Games would be a great opportunity for our country’s developing stars to gain valuable experience. Experience like that is only going to help once you get to the top level.

CK: Which you proved in cross country. Generally speaking, how do you feel about the standards being as fast as they are for the Commonwealth Games?

LB: Anytime the standards are the World Champ/Olympic level it makes it very hard for developing athletes like myself to make the team. In Canada once an athlete finishes there junior career there are not many opportunities to make teams as an early senior. Obviously certain athletes are able to make the jump, but for most this is a hard transition. Having the chance to make team like this would only provide a much needed experience for future championship events.

CK: Given that the 5,000m standards are so high; will you continue to pursue the event?

LB: I’m not planning on switching events any time soon. I think I’m still somewhat in the process of accepting that I am a 5,000m runner rather than a 1500m guy. And I think as long as I stay healthy I can continue to take the steps that would get me to the elite international level. I’m lucky I have such a great coach and great group of athletes to work with. They keep pushing me to new levels.