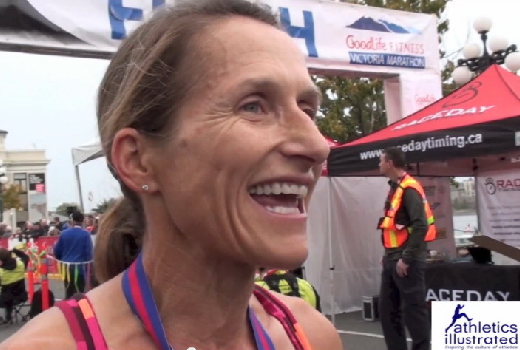 Saanich’s Lucy Smith saw the schedule for the Christie-Phoenix Insurance Victoria Track Series, quickly checked what the Canadian record is for the 5,000m distance (5K on the track) and showed up at the University of Victoria’s Centennial Stadium Wednesday night with the goal to better it. She did, by a whopping 10 seconds.

The old record was 17:49.83 by Kathryn Martin from her 2002 running of the distance in Orono, ME. Smith would need to run approximately one minute and 24 or 25 seconds per lap, 12.5 times. Most athletes looking to take a national record would be quiet and nervous on the start line. Smith, who is a veteran of racing in ironman, duathlon, cross-country, road and track racing and a 19-time Canadian champion, casually asked “Will someone be calling out splits. I just need the first three or four laps and then I am set.”

Laughing she asked, “Where is Ron Bowker, when you need him,” referring to long-time Victoria area coach, who is known to have led many top-level Canadian runners to national and international success. Bowker can often be found automatically calling out splits for the athletes.

Not wearing a watch, she finished the race not knowing her time for the first few minutes afterward, she said, “Well apparently I was 17:00 with 200m to go, so I am sure I can run that in under 45 seconds,” laughing.

“Well that was fun.”

Also in the race was UBC Thunderbird’s Madelyn Brunt, who was part of the 2016 NAIA cross-country champion team. She finished in the time of 17:56.63 for fifth place, but second female.

Comox Valley native Neil Holm took in the race. He is a top provincial master (40-plus). He finished second overall and top master in the time of 16:49.64.

The race was won by Adam Buzinsky in the time of 16:17.11. Buzinsky established a large lead early and ran alone for the entire race.

There were three other races offered, two 800m and one 1500m distance event.

Emily Saville won the second 800m race in the time of 2:50.09, finishing ahead of Jim Fliczuk and Brittany Carey for second and third, respectively.

Winkler was at it again, this time; he took out the 1500m field and won the race outright in the time of 4:44.47 over Beth Venables and Harrier Gary Duncan who crossed the line second and third. Both Duncan and Winkler raced three times on the night, while Venables took in the 800m and 1500m distances.