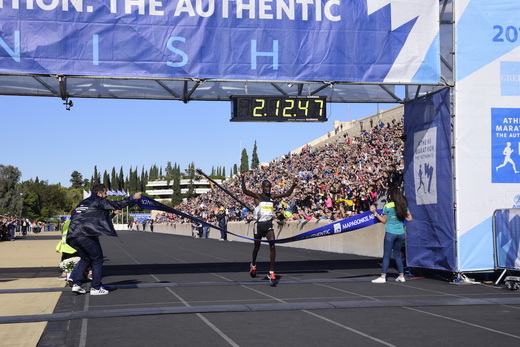 In a dramatic closing sequence Luka Rotich overhauled his fellow Kenyan and long-time race leader Benson Kipruto to take a winning advantage in the 34th edition of the Athens Marathon. The Authentic with only one kilometre left to run. In warm and often windy conditions the 28-year-old won in 2:12:49 ahead of Kipruto’s 2:13:24. Completing the more familiar tale of a Kenyan clean sweep, Andrew Kimtai finished third in 2:13:26. The elite women’s field also produced a Kenyan winner and a debutant at that: Nancy Arusei overcame the tough course for an impressive run in 2:38:13 with the 30-year-old finishing ahead of Algeria’s Kenza Dahmani in 2:38:28 and Ourania Rebouli of Greece taking a distant third place in 2:49:24.

The Athens Marathon, held over the unique original course from the small coastal town of Marathon and finishing in the Panathinaic Stadium in Athens, had a record entry of 17,500 runners. Taking into account the 5 and 10km races held in conjunction, the Greek Athletics Federation (SEGAS) noted another record with around 50,000 athletes participating. Before the eventual winner ran into the marble arena of the Panathinaic Stadium, a ceremony celebrated the 120th anniversary since the first Olympic Marathon race. It was on the same course as the 2016 event was held today, finishing in the very same stadium in 1896.

The Athens Marathon. The Authentic is part of the history of dramatic Athens Marathon races, including the Olympic events of 1896 and 2004. When the six-strong leading men’s group reached the highest point in the course at 31 kilometres – around 250 metres above sea level – it had been clear for some time that the course record of 2:10:37 in such windy conditions was going to remain out of reach.

Instead of an attack on the course record the race became a dramatic contest experienced by the many spectators lining the road for the latter stages. Shortly after the course dropped steeply down towards Athens just after 31km Benson Kipruto went clear of his rivals. At the same time Hillary Yego of Kenya, the 2013 Athens champion, dropped off the pace. His compatriot Augustine Ronoh, who had a best of 2:07:23 and was the fastest in the field, had lost contact before.

The 25-year-old Kipruto was running his debut marathon and looked as if he was about to celebrate with a victory. Five kilometres before the finish he led by 40 seconds ahead of a trio comprising Luka Rotich, Andrew Kimtai and Bernard Kitur. Only Rotich had enough left in the tank to summon up one last effort and close the gap on Kipruto.

Rotich caught the slowing Kipruto just over a kilometre before the finish. “I felt good until 41 kilometres but then it became really hard. But I am happy with my debut,” said Kipruto. “It was hard to stay with the pace. But at the end I still had enough left to run fast,” reflected Luka Rotich, whose best time remains 2:08:12. “I think on a flat course I would have definitely run under 2:10 today and perhaps 2:06 or 2:07.”

The women’s race quickly developed into a duel between Nancy Arusei and her Kenyan compatriot Penina Wanjiru with the latter considered one of the pre-race favourites. The Kenyans Gladys Kwambai and Purity Kimetto were dropped soon after 10km, right at the start of the long climb. It was Nancy Arusei who led with Penina Wanjiru behind her. Wanjiru was then dropped as well.

At the end the debutant was the one to falter as Kenza Dahmani reduced the deficit yet the Algerian was not able to overtake the Kenyan. “I never thought before the race that I could win it. I only believed it after 40 kilometres,” said Nancy Arusei.