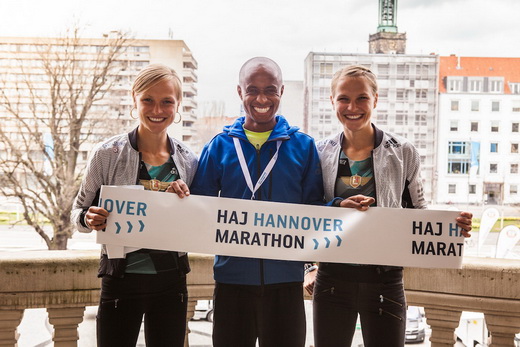 Olympic marathon qualification could be a valuable additional prize for South Africa’s Lusapho April and Germany’s Anna Hahner, who are among the favourites for Sunday’s 26th edition of the HAJ Marathon Hannover. April hopes to improve the course record of 2:08:32 which he ran three years ago on this very flat course in Hannover. If he succeeds the South African would become the first male winner to take the Hannover title for a third time. While late entries are still accepted organizers have already registered a record number of more than 20,000 athletes. This includes races at shorter distances staged parallel to the marathon. The HAJ Marathon Hannover is an IAAF Silver Label Race.

The course record will be attacked in the men’s race. Organizers plan for the pacemakers to reach the half way point in 64:00 minutes and then hope for a negative second half split, which would lead to a first sub 2:08 marathon in Hannover. Two athletes on the start list have run such times in the past: Philipp Sanga features a personal best of 2:06:07 from the Frankfurt Marathon in 2011. While it will be his first race in Hannover fellow-Kenyan Duncan Koech is a former winner of the HAJ Marathon Hannover. He won back in 2008 and then was fourth three years later. Koech clocked his personal record of 2:07:53 in the Cologne Marathon in 2012.

While Sanga and Koech could not match similar times recently fellow-Kenyan Martin Kosgey did well in Hannover during the past two years. In 2014 he was fourth with 2:11:37 and then he took third a year ago, improving his PB to 2:09:50.

But it is Lusapho April who gets a lot of pre-race attention in Hannover. It will already be the fifth time he will compete in the HAJ Marathon. „I am fit and feel very well. I believe I can run a personal best here and hope to run under 2:08 on Sunday,“ said Lusapho April. However winning the race for a third time is the main priority for the South African. Regarding Olympic selection probably a time of around 2:11:30 would be enough for the 33 year-old to qualify for Rio.

Kenya’s Moses Masai is another runner who intends to run in the first group on Sunday. The 10,000 m bronze medallist from the World Championships in 2009 has not yet achieved a sub 2:10 time in the marathon. In 2014 he improved to 2:10:36 in Duesseldorf. „I will go with the first group and run the first half in 64 minutes. It is my goal to run sub 2:08 in Hannover,“ said Moses Masai.

Germany’s Anna Hahner is the fastest runner on the women’s start list. Featuring a personal best of 2:26:44 from Berlin 2014 she also has won a major marathon already: It was also in 2014 when she sensationally took the Vienna City Marathon. This spring she opted to run her marathon on the very fast Hannover course. Underperforming in last year’s Berlin Marathon she clocked 2:30:19. While she is just inside the German Olympic qualifying standard of 2:30:30 her place is not secure if she does not run faster on Sunday. „I am in top shape and want to run the first half in 1:15,“ said Anna Hahner, who will then aim for a faster second half.

It will be the first time since autumn 2013 that the Hahner twins will compete in a marathon together. In Frankfurt Anna was ahead of Lisa. However things changed last year as for the first time Lisa was faster than Anna. And it is now Lisa whose ticket to Rio is all but booked. She improved to 2:28:39 in Frankfurt last year, winning the German championship. „I have trained well and look forward to Hannover,“ said Lisa, who will run the same pace as Anna.

While the Hahner twins could possibly both achieve a top three finish in Hannover there are a few who could spoil the party. Tizita Terecha Dida looks to be the main threat for the Hahner twins. The Ethiopian, who improved to 2:28:02 when winning China’s Guangzhou Marathon last year, might well run a faster pace in the first half. If she goes for a personal best then the course record might be under threat. Ukraine’s Olena Burkovska ran 2:27:07 in 2013.