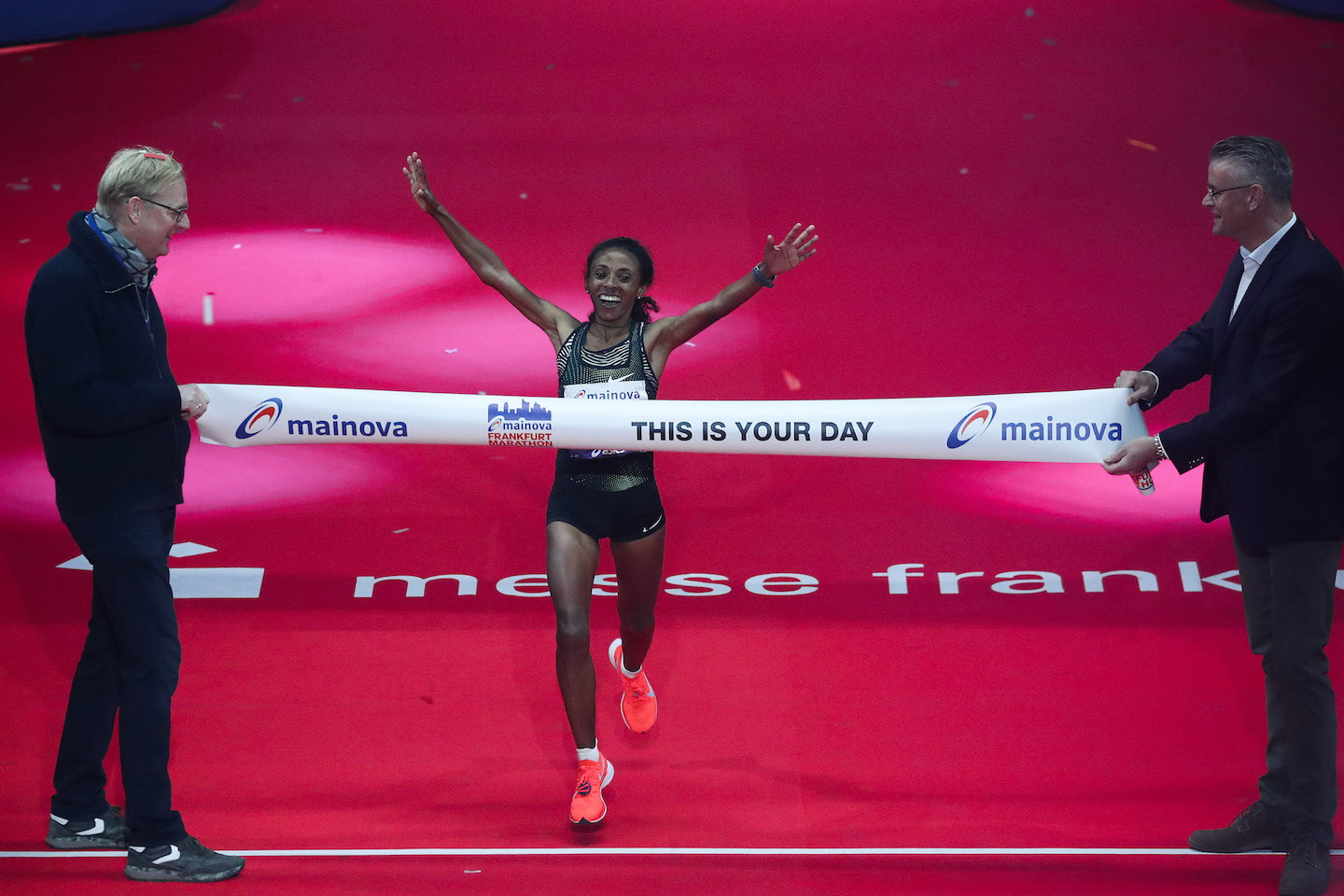 Runner-up last year, this time the number one: the Ethiopian Kelkile Gezahegn won the 37th edition of the Mainova Frankfurt Marathon in cool and at times extremely windy conditions in 2:06:37. After a thrilling duel, he broke away from Martin Kosgey of Kenya who finished in 2:06:41. Fellow Kenyan Alex Kibet finished third on his marathon debut in 2:07:09.

A masters world record was broken when Mark Kiptoo finished sixth in 2:07:50, improving the men’s Over-40 record by 48 seconds. Arne Gabius showed strong form to finish ninth in a high-quality field when the 37-year-old crossed the line in 2:11:45, the fastest time by a German this year.

The top result of the day was achieved by the women’s winner as the 33-year-old Ethiopian Meskerem Assefa broke the course record with 2:20:36, which was 25 seconds faster than her compatriot Meselech Melkamu had run here in 2012.

In a women’s field which produced high-quality performances in depth, Haftamnesh Tesfay of Ethiopia ran 2:20:47 for second place, also faster than Melkamu’s former course record of 2:21:01. Ethiopia achieved a clean sweep of the women’s podium when Bedatu Hirpa crossed the line for third in the Festhalle in 2:21:32. The leading German finisher among the women was Katharina Heinig who finished impressively in 14th place, just inside 2:30. Her time of 2:29:55 was the second fastest by a German woman this year.

“We were delighted with the results, the fantastic atmosphere in the city and the number of participants,” said the race organiser Jo Schindler as he looked back on the day. The elite race director Christoph Kopp summed up the performances of the elite athletes: “We’ve shown the marathon world once again that you can run very fast here. I am delighted that the women’s course record has been broken.”

A big group of 12 men went through halfway in a speedy 62:27. The wind from the north-east favoured a fast early pace so that thoughts were soon turning to a time of 2:05 or even faster. As expected, the headwind from 27 kilometres onwards slowed the pace. Ethiopia’s Kelkile Gezahegn and the Kenyan Martin Kosgey, the runners-up in 2017 and 2016 respectively, launched an attack which broke up the leading group. Kenya’s Alex Kibet, making his marathon debut, then regained contact with this duo at 36 kilometres.

Three kilometres from the finish, Martin Kosgey went into the lead and Kibet dropped off the pace. Gezahegn remained and tracked Kosgey in what become a tactical finish, culminating in a sprint 500-metres from the line. Gezahegn attacked just before the entrance of the Festhalle, celebrating victory in 2:06:37 by four seconds ahead of Kosgey. Alex Kibet made an impressive marathon debut for third place in 2:07:09.

The 22-year-old Gezahegn had been hoping for a faster time but adjusted his plans to concentrate on victory: “I had said beforehand that I wanted to run 2:04 but then I realised it was getting tough for everyone. We weren’t going to run a super-fast time so I gave everything I had to win and it paid off. If I want to run in the Olympic Marathon, I still have a lot of work to do.” Martin Kosgey set a personal best with 2:06:41, finishing runner-up in Frankfurt for the second time after 2016. “I was very confident from the start. I thought I could beat Kelkile but this was still a better performance than two years ago.”

When a big leading group of twelve runners passed the half way point in 69:55 it was obvious that something special was possible. The group was on course for sub 2:20 and although weather conditions were far from ideal the women kept their pace until late in the race. At 30 k their 1:39:30 split time still pointed to just below 2:20. It was only after this point when the group slowed slightly and some lost contact running into a headwind for several kilometres.

At 35 k there were still five runners in the leading group: Ethiopians Haftamnesh Tesfay, Bedatu Hirpa, Meskerem Assefa and Dera Dida as well as Betsy Saina. The Paris marathon champion from Kenya then struggled and finally finished eighth. Hirpa and Dida also dropped back while Tesfay and Assefa were now battling for victory. It was in the final kilometre when Assefa, who finished third in Frankfurt a year ago and had the advantage of knowing the course, moved ahead and build a decisive lead. „I did not really feel the wind,“ said Assefa after winning in 2:20:36. „I prepared for Frankfurt for five months because I wanted to run 2:22 and win the race. Now I had to run a little bit quicker for first place.“ Second placed Tesfay clocked 2:20:47 and also was inside the previous course record of 2:21:01. Without the wind the leading duo might well have broken 2:20 today.

With her winning time, which is also a personal best, Meskerem Assefa moved up to 13th in the world this year. Besides her four more athletes of the top ten ran personal records in Frankfurt. Seven runners finished inside 2:23 in Frankfurt’s women’s race, which is a record for a German marathon. This year only in Dubai there were seven women with sub 2:23 times.