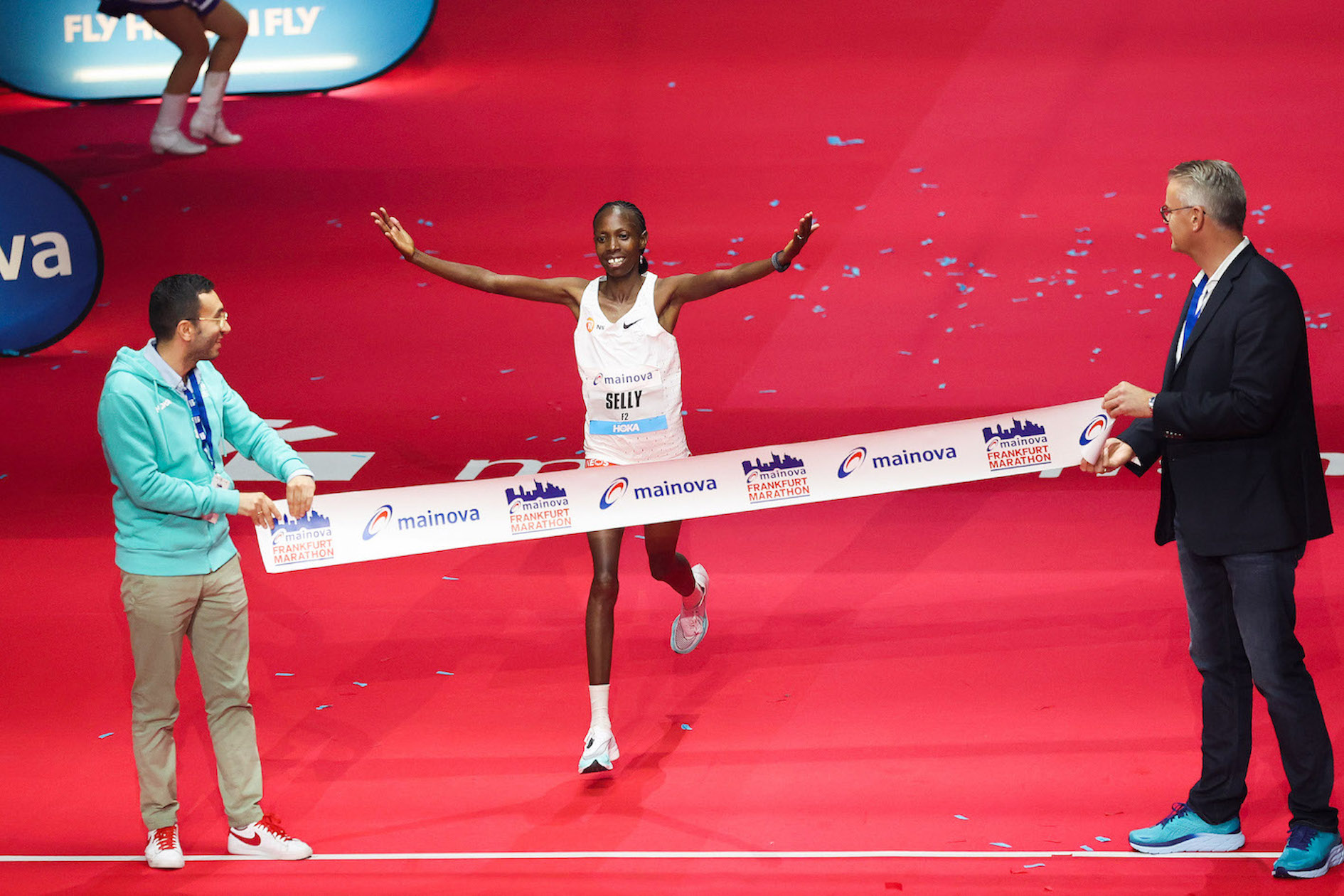 Temperatures were hardly ideal for fast times, nonetheless, the top three men finishers each set personal bests. A big group stayed together, running at a pace that would bring the leaders across the line in around 2:06. Shortly after 25 kilometres, the scenario was transformed as the Kenyans Brimin Misoi and Samwel Mailu seized the initiative.

Their rivals failed to muster a reply and suddenly a finishing time of 2:04 seems possible. But the rising temperatures forced Misoi to slacken his pace from kilometre 37 although he remained unchallenged for the win as he was cheered to the roof of the Festhalle in 2:06:11.

“I expected to win. My form was good. The course is outstanding, I am sure I can run faster here,” he said.

His previous personal best was 2:08:41, set in May this year at altitude in Nairobi, which is always a tough event. Misoi showed that he is a competitor by taking over two-and-a-half minutes off that time.

Samwel Mailu was a distant second but deserved the applause and was right to celebrate a brilliant marathon debut in 2:07:19. This was achieved after completing his original role as a pacemaker for Misoi and the rest of the leading group to outstanding effect. The organisers had agreed on the eve of the race to his request that he could race to the finish, once his pacing duties were done. The Ethiopian Derese Ulfata also produced a solid performance to finish third in 2:07:30, also a personal best.

The home fans also had good reason to celebrate the success of Hendrik Pfeiffer. In a controlled effort, the German finished a creditable seventh in 2:11:28, not quite the sub-2:10 he had wanted but his second fastest time ever, nonetheless.

“I’m mega-happy. It was a great result and rounds off a great year for me,” said Pfeiffer, who at the European Championships in Munich in August finished 24th, helping Germany to win the silver medal in the team competition.

The women were on course for a sub-2:20 finish and a course record until late in the race. Kenya’s Valary Aiyabei clocked the current record of 2:19:10 three years ago and this remains the only sub-2:20 result in the history of the event. Selly Kaptich, who was the fastest runner on the start list with a PB of 2:21:06, ran right behind the three pacemakers right from the start. They reached halfway in 69:40 and at this stage Ethiopians Atalel Anmut Dargie and Yoshi Chekole still managed to hold on to the group. A bit further behind a second group with six runners followed in a promising split time of 70:34. Among these runners was Helah Kiprop, Kenya’s marathon silver medallist from the World Championships in 2015.

However, just a few kilometres later the picture changed decisively. Dargie was the first one who could not hold the pace and when the former track runner Kaptich increased the pace further at 25k (1:22:27) Chekole dropped back as well. Kaptich covered the following 5k section in a quick 16:18 and her 30k split time of 1:38:45 then indicated that a sub 2:19 finish might be possible. But all of a sudden the Kenyan leader was in trouble as well. In the warm conditions, she slowed considerably. Kaptich was not in danger of being caught because she was well ahead by over two minutes and the women behind her also slowed as well. But the course record was soon out of reach and a time of sub-2:20 became unrealistic as well.

With a time of 2:23:11, Kaptich ran the third-fastest marathon time of her career. Behind her was Helah Kiprop who had moved up into second place and then finished in 2:24:40 with fellow Kenyan Jackline Chepngeno taking third in 2:25:14.

“It was a great day for me. The atmosphere was superb and I think I could break the course record if I could come back next year and if weather conditions would be cooler,“ said Kaptich.