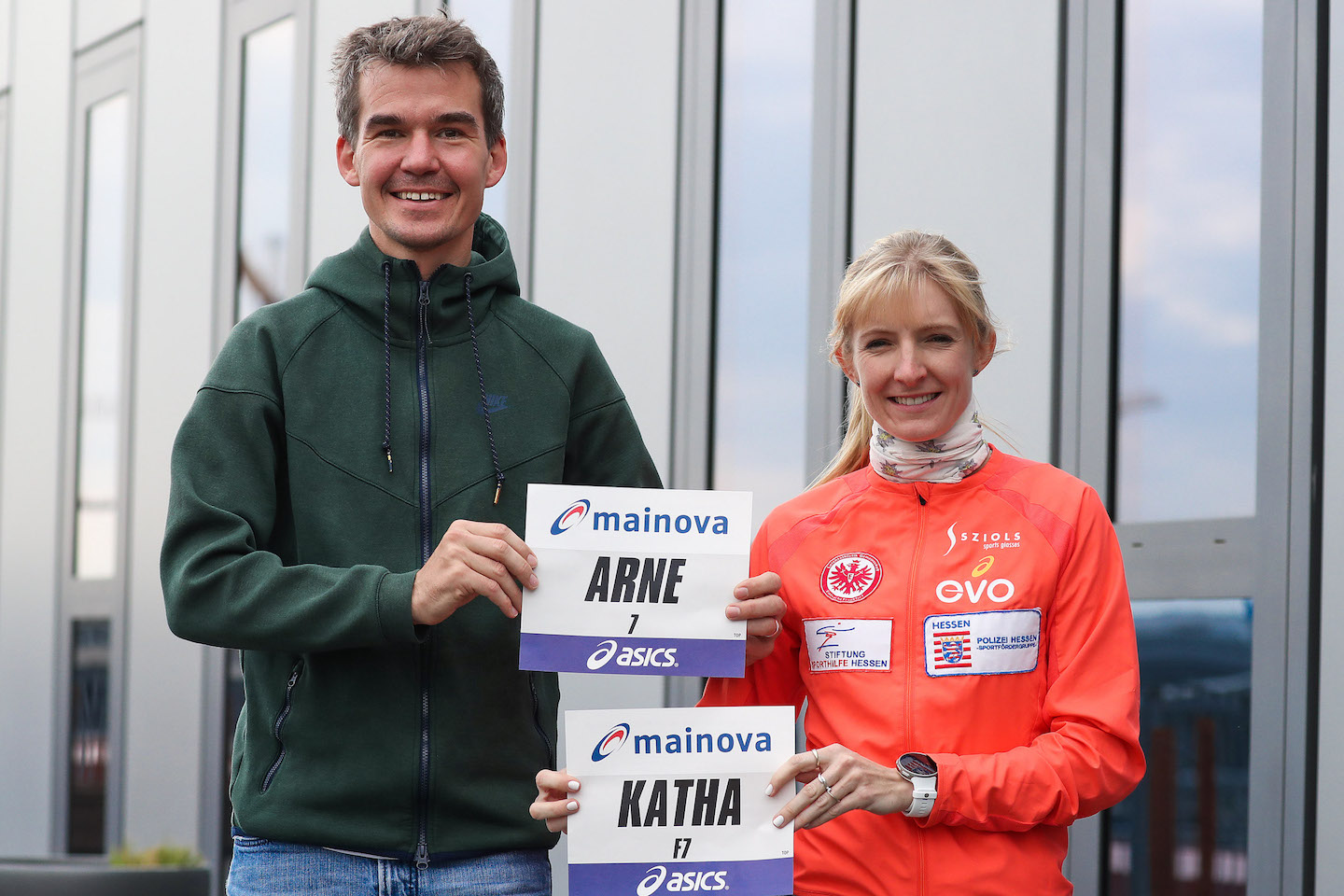 Arne Gabius and Katharina Heinig are ready for the Mainova Frankfurt Marathon on Sunday. Last year the leading German duo won their respective national titles at this prestigious race which holds the IAAF Gold Label, the highest distinction awarded by the world governing body of athletics. Although the German national titles will not be at stake on Sunday, both are keen to make their presence felt in the German top performance lists for the year and possibly also the European lists.

“My goal is to produce a smooth performance on Sunday. When I made my marathon debut in Frankfurt I ran the first half in 65 minutes and the second half faster – that gave me a lot of pleasure. At 30 kilometres I was 21st but finished fourth. Whenever I watch a race for motivation, I turn to Frankfurt 2014,” said Arne Gabius, who plans a similar approach on Sunday. “I want to run the first half in 65 minutes.”

“There were good and bad days in training but the good outweighed the bad,” reflected Gabius, who lost around two weeks of training to two bouts of cold. For this reason he doesn’t envisage a record chase similar to that three years ago in Frankfurt when he broke the German record with 2:08:33. The 37-year-old is nevertheless keen to maintain his successful sequence in Frankfurt. “So far I’ve always finished inside the top ten,” said Gabius, who has also broken 2:10 on each of his previous races here. He ran 2:09:32 on his marathon debut, followed that with the national record of 2:08:33 the next year and last year returned after various injury problems to run 2:09:59.

Gabius had his share of injury problems this year as well. He had to drop out of the Boston Marathon in April with neck problems. A programme of stretching and yoga helped him deal with this. “I think running between 2:09 and 2:11 is possible on Sunday – I’d be happy with that. To run 2:12 would be disappointing.” The current German best for the year is 2:13:39 by Philipp Pflieger in Hamburg in April. Only four Europeans have run sub 2:10 this year and a 2:11 time would still be good enough for a top ten position in the continent’s season’s list.

“To give myself motivation during the winter and in preparation for the next race, a good performance in Frankfurt is very important,” said Gabius, who has no plans to run at the 2019 World Championships in Doha. “That doesn’t interest me at all but, of course, the Olympics in Tokyo in 2020 is a big goal for me,” explained Gabius.

It’s going to be very tough for Katharina Heinig, whose mother and coach is former world-class marathoner Katrin Dörre-Heinig, in an extraordinarily strong women’s field to finish among the leaders. “Going on my personal best, I am ranked 15th on the start list,” said the 29-year-old Frankfurt runner who ran 2:29:29 to finish eighth here last year.

Heinig struggled to be at her best in the extreme heat of the European Championships in Berlin in August, finishing 16th in 2:35:00. She then married on September 6 before making a late decision to run in Frankfurt. “The first week of training was hard but then things went really well. Of course, it’s hard to give an exact prediction because it’s a marathon after all,” explained Katharina Heinig, whose first objective is to run under 2:30. “My second goal would be 2:29:28 but whether I can run faster than that, I’ll see how it goes on race day.” Her second objective would be exactly one second faster than the current leader in the German women’s rankings, Anja Scherl, who ran 2:29:29 in Osaka in Japan in January. Heinig’s best time is 2:28:34. Only 13 European women have run under 2:30 this year.

Katharina Heinig’s key goal is the Olympic Games and, like Arne Gabius, she has no plans to run in the World Championships in Doha next year. “Although the start is at midnight, it will still be 30 degrees – there would be no point me being there,” said Heinig, who doesn’t run well in the heat. After the Mainova Frankfurt Marathon the next item on her agenda will be surgery on a troublesome heel. “I don’t want to risk anything in terms of aiming to qualify for the Olympics so that’s why I am having surgery.”

Both Arne Gabius and Katharina Heinig will wear the number seven in the Mainova Frankfurt Marathon on Sunday. This number – it will be F7 in the women’s race – is traditionally given by the international race co-ordinator Christoph Kopp to the runner he reckons can achieve something special and he has often been proven right.