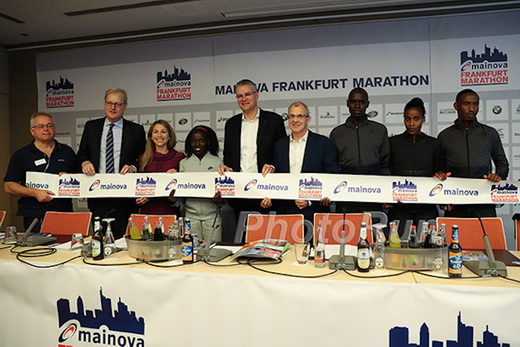 The Mainova Frankfurt Marathon has been a springboard for a number of promising marathon runners in the past. The most prominent example is Wilson Kipsang, who won in Frankfurt with 2:04:57 in 2010 and then returned a year later, missing the world record by only four seconds and his time 2:03:42 remains the course record to this day. Two years later Kipsang broke the world record in Berlin. Back in 2008 Robert K. Cheruiyot came to Frankfurt to run his first race outside Kenya. He broke the course record with 2:07:21 and then won the Boston Marathon with a course record of 2:05:52 in 2010. “The Mainova Frankfurt Marathon is an immersion heater for elite athletes,” said Race Director Jo Schindler during a press conference before the 36th edition on Sunday.“Hopefully the next runner to take a major step in her marathon career here in Frankfurt is Vivian Cheruiyot,” said Jo Schindler. Indeed, the Kenyan Olympic 5,000 m champion might be the one who could turn up the heat in the marathon market after Sunday’s race.

The presence of Vivian Cheruiyot brings a superstar of world sport to the start line. The 34-year-old Kenyan was voted World Sportswoman of the Year in 2011 (Laureus Award). At the 2011 World Championships in Daegu, South Korea she won both the 5 and 10,000m titles. In all she has won five world titles including the 2011 World Cross Country, crowning her track career with Olympic gold at 5,000m in Rio in 2016.

She will be the most successful woman runner and first Olympic champion ever to stand on the start line of the Mainova Frankfurt Marathon, having made her marathon debut with 2:23:50 for fourth place in London this April. “I’ll run hard and want to improve my personal best,” she said. The plan is to go through halfway in 70:00 which would be on course for a finishing time of 2:20. That would certainly put the course record of 2:21:01 under pressure, set by the Ethiopian Meselech Melkamu five years ago.

Extra incentive has been provided by a bonus of 30,000 Euro on offer from the Frankfurt Messe for breaking either course record. “I expect we’ll be paying out on that bonus. The aim is a new course record for the women,” explained elite race coordinator Christoph Kopp.

However Vivian Cheruiyot is just one of a number of athletes capable to win on Sunday. There are five runners on the start list who feature faster marathon times than the Olympic Champion. Ethiopia’s Feyse Tadese is the fastest in the women’s field with a time of 2:20:27. “I will go with the first group,“ she said. “And of course it is my aim to win the race.“

While she is not among the favourites, another one to watch is Sara Hall. The US runner improved to 2:28:26 in Tokyo last February. This was the first time she broke 2:30 and now she hopes to make another big step. “It is my goal to lower my personal best. My aim is to go for 2:25,“ said Sara Hall.

Germany’s Fate Tola is planning a similar pace. “I am well prepared and intend to run the first half in 73 minutes. After that I will see what is possible. It might depend on the weather as well since the forecast is for windy conditions,“ said Fate Tola, who is also the favourite in the German Championships’ race, which is included in the Mainova Frankfurt Marathon.

While much of the focus is on the women’s race the “immersion heater“ may well be switched on in the men’s race as well. Defending champion Mark Korir will once again battle with the runner-up from 2016, fellow-Kenyan Martin Kosgey. “I have trained well and I hope to break my personal best on Sunday,“ said Mark Korir, who clocked 2:05:49 when he won in Paris two years ago. Last year he ran 2:06:48 to take Frankfurt. “May be even a 2:04 time is possible,“ said Korir. The only one in the field who has run such a time is Ethiopia’s Getu Feleke. He ran 2:04:50 in Rotterdam in 2012. Additionally Feleke produced course records in Amsterdam in 2010 (2:05:44) and Wien in 2014 (2:05:41). He had health problems in the past, but is optimistic for Sunday: “I am in fine form and want to win the race. If the weather is fine a personal best becomes a goal.“

Arne Gabius returns to the scene of his German record two years ago, having already celebrated a family achievement. His wife Anne gave birth to their first child on Thursday evening and their son Frederik Bosse is going to have plenty to talk about in years to come. His father broke the news via video and will be running on Sunday although arriving somewhat later than planned. “Arne can now relax and run well, I’m sure of that,” said the race director Jo Schindler. Two years ago Gabius broke the national record with 2:08:33 but since then has been troubled by injury although his form has been on an upward curve recently.