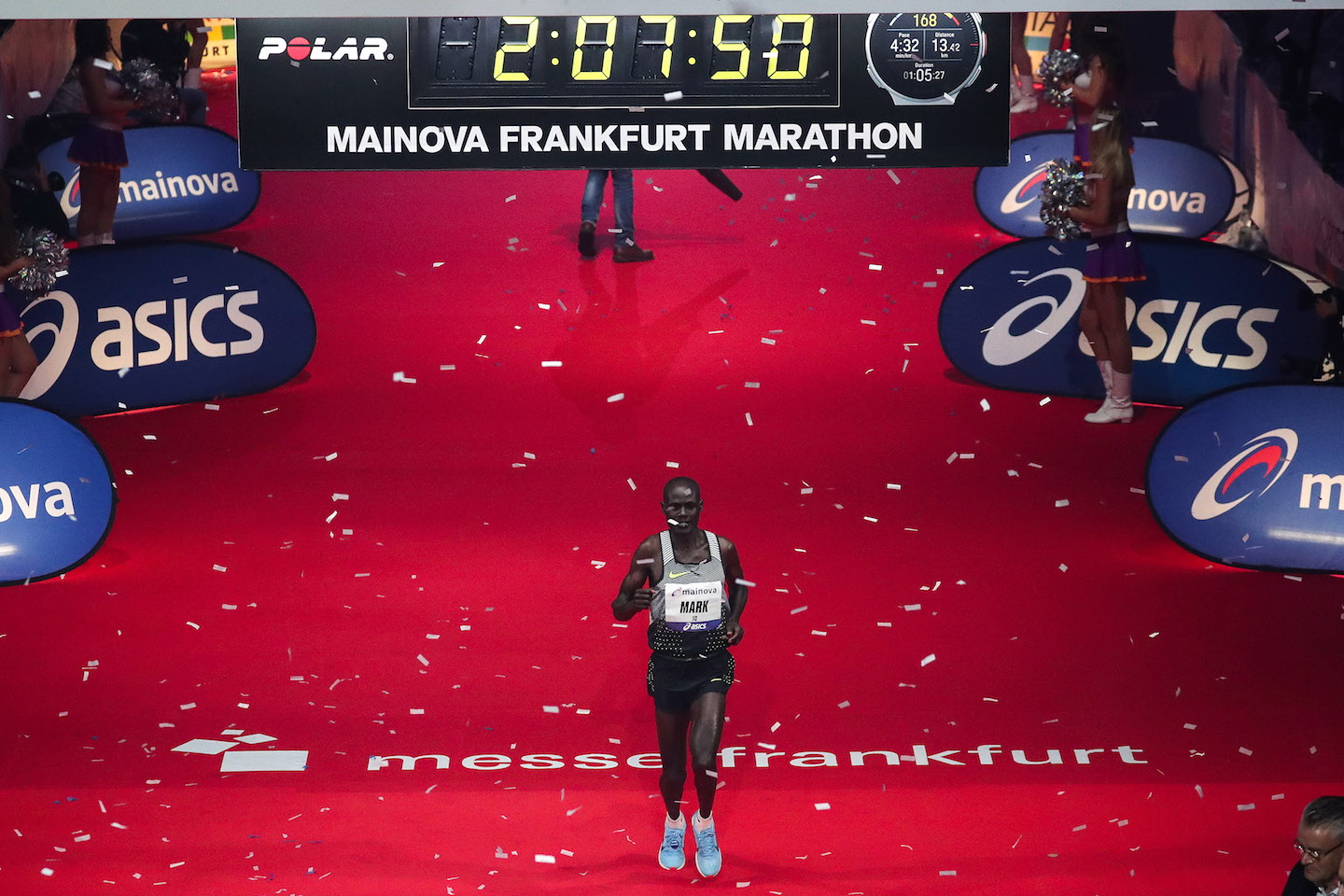 Mark Kiptoo gave hope to mature marathon runners everywhere when he broke the World Masters Record for runners over-40 with 2:07:50 for seventh place in a strong field in Frankfurt on Sunday. At 42 years, 128 days, the Kenyan returned to the scene of his marathon debut in 2013 and victory the following year to achieve the greatest performance of his career – so far. It is the first time in the history of the Mainova Frankfurt Marathon that a world record was broken.

When Mark Kiptoo made his marathon debut at the age of 37 in the 2013 edition of the Mainova Frankfurt Marathon, few would have picked him out as a future world record breaker. True, his track and cross country career had been solid enough including seventh place in the long course event at the 2009 World Cross Championships and winning the African 5,000m title in 2012. But when being interviewed before his marathon debut in Frankfurt five years ago, he radiated a quiet confidence in what his future might hold. That was confirmed when he finished second in 2:06:16 and won the Frankfurt title in 2014 with 2:06:49, aged 38.

Kiptoo crossed the finish line in Frankfurt’s Festhalle a little over a minute behind the Ethiopian winner Kelkile Gezahegn, 20 years his junior. It was another Kenyan whose name he replaced as world record holder for the over-40s: Kenneth Mungara, whose time was 2:08:38 at the Milan Marathon on April 3, 2016. Mungara had twice previously broken the record and in the same year – 2015. Firstly in Milan with 2:08:43 and improving by just one second on Australia’s Gold Coast barely three months later. The record had been in the possession of Mexico’s Andres Espinosa with 2:08:46 in Berlin since 2003.

After breaking the world record for Masters or Veterans, Kiptoo reflected on his success in Frankfurt and what he might be capable of in future: “For sure I want to keep pushing and believe I can still go faster. Today 2:05 – 2:06 was possible but the wind in the second part of the race made it hard. I was aware of the record but my goal was also to try to win the race. Once the leaders had got away I was still fighting for every position and it was nice that this assisted me to achieve the record.”

Given this positive outlook, Mark Kiptoo doesn’t see the end of the road to his elite running career any time soon: “I want to continue to run as long as my body will allow. For now, I am still healthy and my training showed me I was in good shape. With the support of God, my family, my management team and my training partners, I know that anything is possible.” He also emphasized the support he receives as a member of the Kenyan Armed Forces, having joined the Air Force after leaving school in 1997 and his current station at Iaikpia Air Base.

Kiptoo believes strongly in the concept that running knowledge is handed down from one generation to another. He learned from some famous names when he was coming up and now he tries to share what he learns with the younger generation: “I gained much experience when I started to run internationally back in 2007. I was fortunate to learn from many great athletes like Noah Ngeny and I always try to lead by example in what I do and educate the younger runners in how disciplined and determined you must be. I do not really view what is possible in terms of my age, I am seeing it to be the best that I can be every day.”

He accepts that one day his name will no longer stand beside the freshly broken world record for the over-40s: “Now I have the record I am happy but one day someone will break this. That is how athletics works but I am proud that my name will now show in the record books.”

Crossing the line on the Festhalle’s red carpet to become a world record breaker, Mark Kiptoo achieved his ambition in Frankfurt and who would say there might not be more to follow?