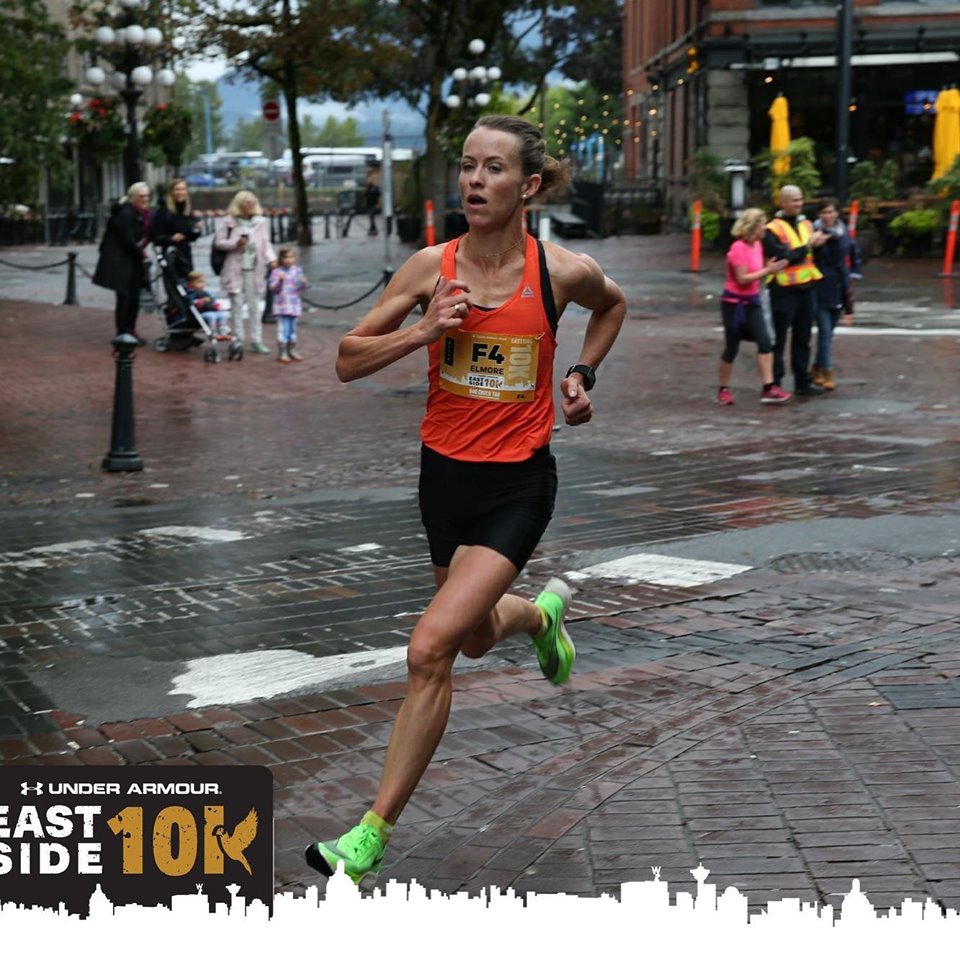 Malindi Elmore, a Kelowna mother of two boys, won the Under Armour Eastside 10K in the time of 32:44 on Saturday in Vancouver. It represents a new personal best time.

The thirty-nine-year-old is a former international-level 1500m runner for Canada. In January, she debuted in the marathon with an impressive 2:32:15 performance in Houston. During the spring, she continued to race well on the roads.

In May, she ran the Ottawa 10K finishing in the time of 32:57. Three weeks later, she ran a half-marathon best of 1:11:08 in Winnipeg at the national championships, earning $5,000 for her efforts. She finished behind only six men.

“This past spring I focussed more on 10K speed but wasn’t able to hold my form through the whole 10K with fading over the final 2K of my races but I felt overall stronger at Eastside. So I guess [that is] more proof that lots of aerobic work and mileage can translate to shorter race results! It was a road PB for me, so I was pleasantly surprised as I guessed I would run around 33:15 with my current load and specific training.”

According to the IAAF scoring tables, her half-marathon (1:11:08) and Saturday’s 10K race (32:44) are identical performance-wise, and both performances suggest a one-minute personal best over the marathon distance. Only, she is currently in the middle of marathon training. Expect more from her at the Scotiabank Toronto Waterfront Marathon in October.

“I was pleased with my run – both with how I felt and the result,” said Elmore. I had been feeling pretty flat lately with so much running and marathon training and wasn’t sure how much faster than marathon pace I could go. I did a little fartlek on Tuesday prior to the race and my default was marathon pace despite attempts to run faster. However, once we got going in the race, I was able to find a comfortable rhythm and felt strong throughout.”

SHOESTRINGS: Another 39-year-old Canadian ran a road personal best on the weekend. On Sunday, Emily Tallen-Setlack ran the Philadelphia Half Marathon in the time of 1:12:36. She is also expected to race a fall marathon and will choose a race over the next few days.