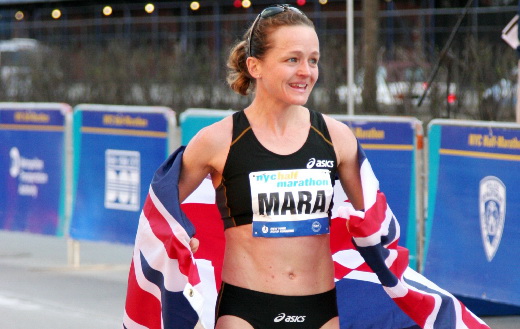 Mara (nee Myers) Yamauchi is an English distance runner who specialises in the marathon, however, does not stray far from competition at shorter distances like the 5,000-metres and up to the half-marathon.

She grew up first in Kenya, then England and lived five years in Japan.

Her career is noteworthy, however, while she competed at the same time as Paula Radcliffe, she may have been overshadowed by the enormity of her career. Saying that, her personal best in the marathon is a world-class 2:23:12, which makes her the second-fastest British athlete over the marathon distance, all-time.

Now retired, Yamauchi reflects on her career, below.

Christopher Kelsall: It is interesting that you lived in Kenya as a child, which of course is where the strongest distance runners come from. Did living there influence your running later in England?

Mara Yamauchi: Yes for sure. The climate probably had the most impact since we spent a lot of time outdoors being physically active and enjoying sports. Also I think growing up at high altitude must have had a positive impact. I left at age eight in 1982 so I wasn’t very aware of the running pedigree in Kenya at the time.

CK: Who were or are your running mentors?

MY: Daley Thompson, the decathlete, inspired me as a child to become an Olympian. Many of the female distance runners I’ve raced and competed against have inspired me such as Benita Johnson of Australia, Mizuki Noguchi, the 2004 Olympic champion, and of course Paula Radcliffe. And going back some years, the athletes who were pioneers in the women’s marathon such as Joan Benoit and Joyce Smith were also role models for me.

CK: You seemed to have gotten the most out of your marathon ability in comparison to the shorter distances, with your personal best of 2:23.12, plus a few 2:25s. Did you work more for your marathon efforts or would you suggest that you are more suited to longer running?

MY: In 2003 I decided to make a serious attempt to qualify for the Olympics, which had been my childhood dream since age 11. Looking at my abilities (stamina better than speed) and the qualification standards, I decided that the marathon was my best option so that is the event I concentrated on. Once I tried it, I was hooked and my training was focused on the marathon though I did compete over shorter distances too. My personal bests for all the shorter distances came down after I took up the marathon.

CK: Can you describe how being hooked manifested itself?

MY: I enjoyed training and racing, and endurance is my strength. The marathon appealed because the human body is well-suited to run about 20 miles (32-kilometres), so I liked the challenge of figuring out how to train to run beyond that distance, fast.

CK: Almost all of your better performances took place in either England or Japan, Did you simply race more often in these two countries or are the courses like Marugame half-marathon and London marathon more suited to your style being flat and fast?

MY: I raced a lot in Japan because I lived there for five years as an athlete and because Japan is a superpower in the women’s marathon – there are many terrific, well-organised races and there is always good competition. The marathon is very popular with the general population and the 2007 World Championships were held in Osaka, while I was there.

I ran Marugame several times because it is a fast course, there is always a great field, and it’s a mixed race. So Japan was a great place for me to live, train and compete. I also raced in the UK a lot because it’s my home country. I often came back to visit family and friends, and London is the flagship British marathon and trial for the Olympics and World Championships.

CK: You had what appears to be a fairly injury-free career. How tough was it to miss the Berlin worlds at age 35 due to a foot injury?

MY: That was disappointing. I was ranked second in the world in 2009 and was confident I could run well in Berlin. I was fortunate to have many years of injury-free running although towards the end of my career I had a succession of injuries.

CK: What kind of trainer were you? Did you like to have a base of volume, then work towards a peak or did you mix in quality throughout your training cycles?

MY: I had a seven day, and then latterly an eight-nine day programme which included all key elements – intervals, long runs, steady runs, strength and conditioning, drills etc. I repeated this programme throughout the year but the emphasis would change according to which events I was training for or the time of year.

CK: Did you ever employ the Japanese super-long runs and very long hikes too?

MY: No. I learned a huge amount from the Japanese marathon scene and from their athletes, coaches, approach to training etc. Their work ethic is phenomenal. But because I was already in my thirties when I started serious marathon training, I wasn’t able to cope with very heavy training, and instead focused more on quality and injury-prevention.

CK: You raced decently at the IAAF World Cross Country Championships in 2005 and 2006, why only those two Worlds?

MY: By 2006 I was really focusing on the marathon and also living in Japan so it was not straightforward to travel back to the UK to run the XC trials, and marathon training and racing was my priority. The London-Tokyo flight is 11-12 hours plus 8-9 hours’ time difference – not the easiest way to prepare for a race!

CK: How much weekly volume did you find was best for you when marathon training?

MY: At the most 90-100 miles per week which is quite low for an elite female athlete but I found that this was the amount I could handle consistently.

CK: This makes sense considering that you typically worked in faster running throughout. Are you a lifetime runner, for example will you continue after retirement?

MY: I love running and if I don’t run, my health suffers. So I hope to be able to run all my life. At present I run about five times per week. I do have talent for endurance running and realise that I am very lucky in that respect, so when I am not making the best of my talent I sometimes feel I am wasting it.

CK: Are you enjoying coaching, does it replace some of the exhilaration that you may have experienced from your racing days?

MY: Yes, I love coaching and helping people. It is really varied, and I enjoy trying to understand what makes my athletes tick. It doesn’t really replace the exhilaration – I’m not sure anything can. But it is very enjoyable nonetheless, and a different type of enjoyment.

CK: Will you race at a high level in the masters categories?

MY: I would love to race again and the Master’s scene is the obvious goal to aim for, but I hate racing when I am out of shape! So I first need to work on doing some decent, consistent training.

CK: Regarding the hot topic of doping in sport, do you know if you were cheated out of prize money and awards during your career?

MY: Yes, several times. For example, I was bumped up from 10th to 8th at London 2010 after Shobukhova and Abitova were banned, and have not received a penny of what I am owed. I raced Abitova numerous times. I also finished behind Rita Jeptoo at the World Championships 2007 though her results were not annulled that far back. In this regard, I have not suffered nearly as much as others have, for example Edna Kiplagat, Des Linden, Alysia Montano, Jo Pavey, Sonia O’Sullivan, Jenny Meadows, Kayoko Fukushi, Yukiko Akaba and others.

An important point for me on this topic is that it now appears, based on ARD/TV and other media like the Guardian for example, that corruption, cover-ups, extortion and bribery were going on in the IAAF for many years, which calls into question any performance during that time. Therefore there are also races I competed in which remain a big question mark for me – was I cheated by dopers? I will probably never know. And remember that the Athlete Biological Passport only came into effect in 2009. I believe there were athletes cheating before then who I raced against, who were not getting caught. The trail of destruction is immense – money effectively stolen, medals going to the wrong athletes, places on podiums and in Olympic finals missed out on, potential endorsements, appearance fees and it goes on, all foregone.

CK: Do you feel that the IAAF and WADA are making headway into the doping issues?

MY: After news of cover-ups and corruption in the IAAF appeared; I totally lost faith in the IAAF. I found it repulsive that the very people who were responsible for delivering a clean sport were subverting it for their own gains, with little regard for the welfare or rights or entitlements of athletes (Shobukhova’s blood was described as like being a ‘medical emergency’ in WADA’s Independent Commission report). I am now waiting to see action from the IAAF which might lead me to change that view. Once you have obliterated trust, it does not return quickly. I believe that what is holding back further progress on anti-doping is a lack of real motivation to fix things, conflicts of interest, too many people making money out of the status quo, and organisational problems.

CK: And now there are brand new allegations that Papa Massata Diack, the son of former IAAF President Lamine Diack, may have received one million Euros from the Tokyo Olympic bid. Also, there is the New York Times article about covert urine swapping late at night during the Sochi Olympics. The problem does not appear to going away soon does it?

CK: Do you think that due to the systematic drug program, bribes and extortion any chance of growth in the sport is now dead?

MY: Athletics and distance running are terrific sports and there will always be people who love doing, watching and supporting them. I don’t think that will change. And there will always be doping and cheating in athletics (and in other sports). I don’t think that will change either. The question then is, can the people who are working to reduce or eliminate cheating and doping do better than those who seek to cheat and dope?

If the authorities in the sport want to grow it, I believe they need to demonstrate, with real action, that they are serious about fighting doping, rather than just trying to convince people of that by using good public relations and spin. I also think there needs to be reform in how sports organisations are structured, for example by introducing more transparency, using fair and open competition, drawing on a wide pool of outside candidates to fill senior positions rather than only drawing on insiders, and giving a much more powerful voice to athletes.

I also believe that athletes take far too much of the blame for doping. If an athlete is caught and gets banned, that athlete serves a punishment. But often the people who might have enabled that doping – agents, coaches, managers, officials, event organisers et al and they rarely seem to serve any punishment.