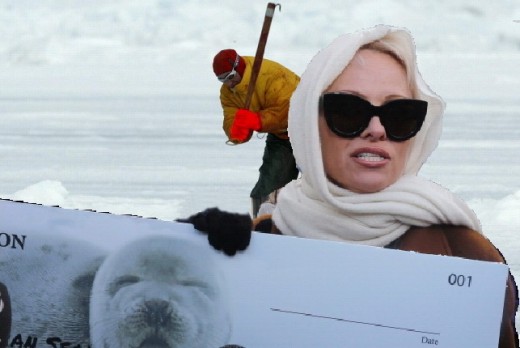 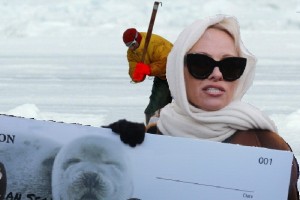 Former marathon runner, Pamela Anderson, who also used to be extremely good looking, was caught off-guard by the people of Newfoundland and Labrador when she arrived bearing a gift of one million dollars. Her donation was intended to provide the opportunity for seal hunters to retire from the so-called “brutal” and “inhumane” annual seal hunt. Much to Ms. Anderson’s surprise the Newfoundlanders accepted the gift however; they apparently used the funds to create the Anthony Bourdain Seal Hunt Apprenticeship Bursary for Newfoundland youth to apply for, exclusively. “Any remaining monies will be ‘plied to our community seal hunt Screech Party, hopefully no duckie ends the ‘eve tits up in the rhubarb, Scopie,” said a smiling and mostly toothless Robbie McBurnes – a prolific seal hunter and polar bear trapper.

Anderson is best known for her 2013 New York City marathon performance where she crossed the line in the time of five hours and 41 minutes. She finished in 31st position in the category of women who have had more than one cosmetic breast enhancement procedure – a product made primarily from petroleum products. When told of her performance, McBurnes replied, “G’wan b’y! She was fairly puttin’ in, getting’ on the go, there, mate.”

Ironically, she arrived to the media conference dressed in a very short white leather mini-skirt, Ugg-brand boots as well as a cotton-polyester blend, low-cut blouse. The ensemble was complemented with a snake skin belt. The belt was handsomely adorned with diamond studs. She also wore translucent nylon stockings and was sprinkled with mock fairy dust – the Skyrim from Monarch butterfly wings.

Anderson, in her naive attempt to halt the annual seal hunt, ironically, violated the following species, on her way to the conference:

Very short leather mini skirt: Bovine (known as “cow” – not as cute as a snake, therefore okay to violate).

Diamonds: All animals that reside near a mine.

Cotton Scarf and gloves: Sheep  – different sheep that sacrificed their pride for the Ugg Boots.

Cotton-polyester blouse: Sheep and a bird (the polyester bird).

Clothing dye: Petroleum products; therefore any animal who resides near an oil well, refinery or high-way or train tracks or pipeline that transport said petroleum products.

Water bottle that she sipped water from: See Bra and panties.