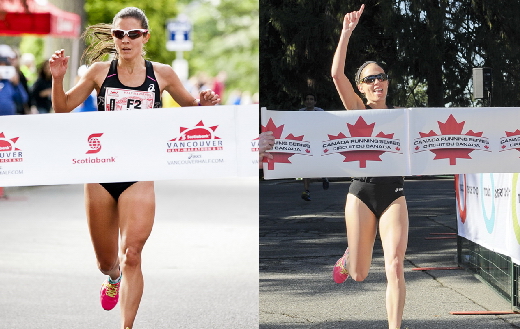 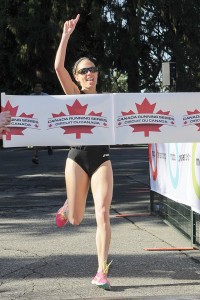 A star studded field has been assembled for the Scotiabank Vancouver Half-Marathon, June 28th but all eyes will be on the dazzling duo of Natasha Wodak and Lanni Marchant.

The pair have battled all Spring on the roads and on the track with a 2-2 score. Vancouver will be a deciding race.

Wodak, the 33 year old Vancouver resident set a new Canadian 10,000m record at the Payton Jordan Invitational May 2nd with a time of 31:41.59 getting the better of her friend and rival whose tenacity was rewarded with a personal best of 31:46.94, the third fastest time ever run by a Canadian. Wodak also beat Marchant at the United Airlines New York Half Marathon in March.

It was a different story at the Ottawa 10k May 24th when Marchant, a criminal defense lawyer living in Chattanooga, Tennessee, finished 3rd in a very strong field with a time of 31:49. Wodak was 4th ten seconds later. The two were heavily applauded for those performances in the IAAF Gold Label race as they beat many strong East African 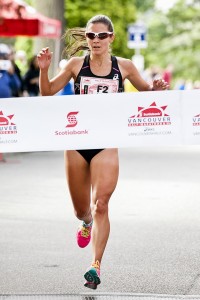 Most recently they raced at the Calgary Half Marathon where Marchant put more than a minute on her rival winning in 1:12:17 to claim the National Half-Marathon Championship.

A year ago Marchant easily won in Vancouver. On the day her task was simply to show the folks at Athletics Canada that she was fit enough to represent Canada at the Commonwealth Games marathon. Her 4th place in Glasgow was proof they had chosen well. This year she knows it will be a more competitive race.

“Natasha and I have had a ‘back and forth’ all season,” says Marchant, who is also the Canadian women’s marathon record holder at 2:28:00. “I don’t think that will change for this race. She is running on her home course and I am defending my title on this course. We both have things at stake but that’s how good competition comes about. I think we we’ll see how it goes towards the end of the race.

“I don’t think I can run away from her – like a bad habit – and I will do my best to not let her do that to me. So I think it will be us next to each other or close to each other for a lot of the race before one of us makes a move.”

Up until last week Marchant had stayed with Wodak at her Vancouver apartment before Wodak flew to New York to compete in the NY Mini 10k and Marchant went south to California. The pair are friends when they are not competing.

“We have tons in common,” Wodak reveals. “We enjoy doing the same things; we like to go out and have a glass of wine or have a beer. We are actually friends, we don’t just run together, we do other things. We get along very well.”

Wodak will approach the race from a different perspective. Both she and Marchant will represent Canada at the Pan Am Games and then the IAAF World Championships in Beijing. They will run the 10,000m at these championships. In order to be in peak fitness for Beijing she and her coach, Richard Lee, adjusted her training program going forward.

“Richard and I sat down and decided June would be a good time for me to sort of take a step back in my training,” she explains. “It’s so that I could have a little bit of a rest from racing hard. I have the Pan Am 10,000m in July but my ‘goal race’ is 10,000m in Beijing at the end of August. So for me to be able to peak at the end of August we decided it was important to take a step, basically, off the track in June. This month is not about racing hard it’s going back to basics getting in some longer runs and tempo runs.”

“I don’t really think there’s a difference in performance so much – I qualified for the 2016 Olympics,” Coolsaet says of seeing the tables turned. “The difference is just that they have a good head to head competition going. They’ve gone for one for one in half marathon and then the 10k which makes it more exciting than myself running a race, while other Canadians like (two time Olympian) Eric (Gillis) are running the 10k championships and me running the half marathon championship.

“I think that is the big thing; they are running well and they are going back and forth. You don’t know who is going to win each race. I think that is what is exciting about it. It’s cool. Chasing times is not that exciting unless you hit them. A big competition is always cool to see.”

Coolsaet suffered a rare loss on the roads at the Calgary Half Marathon finishing eleven seconds behind Kip Kangogo, the Kenyan born Canadian citizen. He says he will be ready for the Vancouver race.

“After the Rotterdam marathon I took a couple of weeks off and I have just completed six weeks of base training,” he reports. “So the Calgary half marathon was kind of really early in my build up. Since Calgary, my workouts have picked up and, starting this week, I am going to have a 10k focus. I will be in better shape for a half marathon in Vancouver at the end of June than I was for Calgary.”

Coolsaet will face Canadian international Rob Watson and the up and coming Sami Jibril among others.