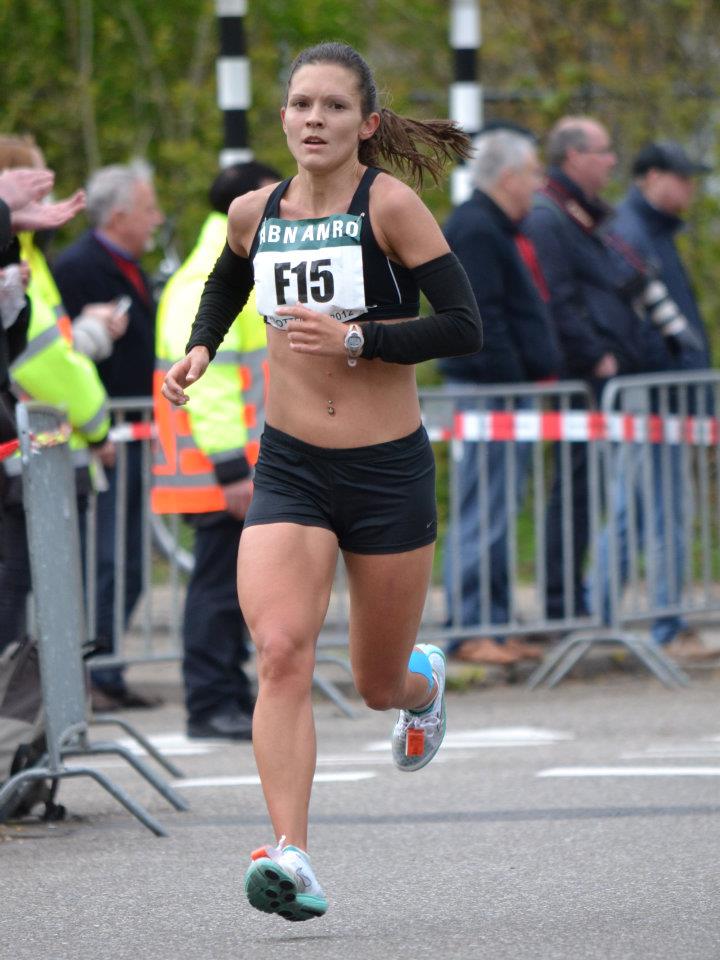 A year ago she finished a credible fifth in the 2012 Rotterdam Marathon not only setting a personal best of 2:31:51 but helping to launch a new era in Canadian women’s marathoning. Indeed, that performance makes her the 9th fastest Canadian woman of all time.

Marchant, a native of London, Ontario, represented Canada at the 2013 IAAF World Championships in Moscow in August but succumbed to the oppressive heat and humidity and ended up walking most of the last seven kilometres.

“While I was walking the course I was thinking ‘dammit this isn’t the way I want to end the season. I am going to do a marathon in the fall,’” she recalls. “It was mentally such a letdown. I am a girl and I needed that minute to cry. I didn’t completely make up my mind to keep training even for the Canadian 10k national championships until I got back home. I wanted to have my little ‘boo hoo’ first.

“I talked to my mom, I talked to my coach Dave Mills, and we put together my training program for the 10k championship with my coach’s disclaimer, ‘don’t be surprised if the mileage is a little higher than your typical 10k program.’ At the end of the day, if I wanted to run Chicago or Toronto, we didn’t want to lose six weeks of training. It was up in the air and in the back of my mind.”

She won the national 10km championship September 20th by thirty seconds (34:07.2) beating Krista DuChene, her teammate in Moscow, Lioudmila Kortchaguina, who is now a master’s competitor and is ranked 3rd all time Canadian with 2:29:42,  as well as Natasha Wodak. All have confirmed they will race Toronto Waterfront.

“I was surprised,” Marchant says of her victory over the shorter distance. “I wanted to go for it. I knew the field was going to be strong. I feel like each year we are getting stronger and stronger ladies. We are all getting closer in our seed times. I think, between Natasha, Krista and myself, there’s only a six or seven second spread. So I knew that if I was going to get it I was going to have to work for it.”

Defeating her rivals was the final impetus to convince her to run Toronto Waterfront. The race was especially positive since she had tweaked a thigh muscle while attempting to lift boxes during her move to Chattanooga, Tennessee.  She practices criminal law there. Marchant graduated from the University of Tennessee in 2007 before obtaining law degrees at the University of Ottawa and Michigan State University.

The 10k race was a brilliant test as she increased her training volume.

“It tells me the engine is still there,” she admits. “But I can definitely feel that the pep I had in my legs in July and August is a little bit harder to find, right now. I did a marathon tempo pace workout last Saturday and I felt great doing it. I definitely feel I have strength and can keep 5:40 pace for 26.2 miles I think that puts me a good bit under 2:30.”

The Canadian women’s marathon record of 2:28:36 has stood since 1985 and Scotiabank has generously put up a bonus of $28,000 should it be broken in this year’s Toronto Waterfront Marathon. Although she hadn’t calculated what a 5:40 pace translates to over the full marathon distance others have. That would lead to a time of 2:28:28.

The question many have had for the 29 year old Marchant is why did she not join the 23 other women in the field of 70, who abandoned the Moscow race, to save herself for another day.

“I dropped out of Toronto last year and I just didn’t think I could handle it mentally; I couldn’t handle dropping out of two marathons,” she reveals. “Both Krista and I had wanted to be at the London Olympics so bad just to get that experience that one of us had to cross that finish line in Moscow. Good, bad, or ugly… I wanted to wear that maple leaf and cross that finish.

“I had modified my legal career so that I can do this. I had made all those adjustments to my lifestyle, I had put in all that training and spent all that money to go to Kenya and everything. I hadn’t done that to not cross that line. I wanted that experience. I put myself up on that world stage. Unfortunately it wasn’t the experience I wanted but I wanted the experience of crossing the finish line.”

Now the experience she covets is a fast time on the streets of Toronto a mark that will erase the memories of Toronto a year ago and put her in the position of which she believes she is capable.

Although it is perhaps lurking way in the back of her mind a good performance Sunday will also earn her the overall victory in the Canada Running Series. With her victory at the national 10km championships and the Toronto Yonge Street 10km in April she has a lead over DuChene. How sweet it would be, however, to finally remove the Canadian Record?