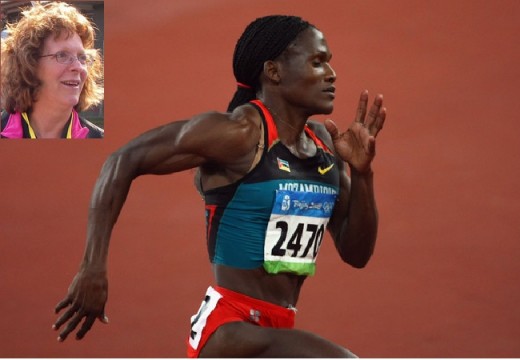 I first met Margo Jennings at the 2011 Canadian Endurance Conference in Vancouver, BC, where she was a featured speaker.

Jennings, the coach of two of the worlds foremost 800m runners, Maria Mutola and Kelly Holmes, did not begin running and especially coaching from a traditional direction, subsequently her coaching methods are not typical for middle-distance athletes.

Her training cycles on paper look similar to other methods. For example she provides two mesocycles to her athlete’s training year with four macrocycles, one peak each for indoor and outdoor track seasons.

During this time, her athletes take one complete day off per week. Athletes also take a three week complete break from each racing season. On the surface, the framework appears to be familiar however, where the larger differences reside with her coaching is in the mental and emotional training that she provides. Where most coaches refer their athletes to sport psychologists, Jennings takes on the mental side of training.

Jennings likes to use positive affirmations with her athletes and to encourage the athlete to develop their ability to use positive self talk. “It takes four positive words to replace one negative word,” says Jennings.

Goal setting is an integral part of the her athlete’s positive mental preparation. The athlete should make 10-year lofty goals as well as short term goals. “They must be written down and posted in a highly visible place,” says Jennings. The purpose is to put the athlete in control of their goal setting and achievement.

Jennings was teaching high school in Oregon and coaching the track and field team when she first met Maria Mutola, then subsequently coached her to world dominance.

Jennings grew up taking dance in New York. She later moved to various parts of the US, settling in Eugene, Oregon where she currently resides as a retired school teacher (46 years) and athletics coach (30 years).

Christopher Kelsall: Can you outline the four cycles of training that you have developed for your middle distance athletes?

Margo Jennings: The first category within my program is Physical Preparation. It is cyclical with two major megacycles – the indoor and the outdoor season, or for the longer distance athlete, the XC and the outdoor season. There is no way I would ever recommend an athlete doing all three seasons in one year, which is why coaching at a collegiate level in America would not suit me. Each of the two megacycles includes four training cycles and a break of three weeks between the megacycles giving the niggles a chance to disappear and the opportunity for each season to begin with a fresh body and mind. The Indoor Megacycle lasts from October to mid-March.  The outdoor megacycle lasts from April – mid-September.

CK: And the cycles within the megacycles start with Foundation, Intensity and?

MJ: Yes the cycles in each megacycle are Foundation, Intensity, Specific Preparation and Racing. When making out the megacycle yearly training plan for an athlete, I start in the Racing Cycle at the most important race(s) that we have penciled in on our schedule and work backward to figure out the length of the foundation, intensity, specific and racing cycles.  At this time, I also look at the weather conditions where we are training and plan for training camps, altitude sessions, and travel.  It is important at this time to have our entire support group involved (strength coach, Pilates coach, masseur, Physical therapist, training partner, doctor, agent, country official….anybody that will be part of our plan for the next few months. I make sure that we’re all on the same page and ready to go.

CK: You studied other coaches for some time, was Canova one of your mentors?

MJ: Canova was not one of my early mentors although I did read about him along the way. It’s funny – back in the 90’s I was advised to keep away from the Italian coaches and agents as rumors were flying about drug involvement. It wasn’t until the early 2000’s that I included the Italians in my education. I did find that Renato and I had many things in common. Although we never were professional athletes, we were both teachers who learned much of our trade through the process of trial and error, developing a passion for our sport along the way.

CK: Your training principals appear to include as much mental training as physical training. I understand that as a school teacher, you taught in a motivational style. Where did the interest in this type of teaching and coaching first develop?

MJ: I’ve been fortunate to have great parents and teachers who have motivated me since I was a young child.  Attending a high school in New York City that focused on the arts  ( think Fame or Glee) developed my creativity and confidence. In college (Univ of Miami), I was given an opportunity to do my student teaching in a disadvantaged elementary school and leaped at the chance.  My students were from poor, dysfunctional families and thrived on the attention and support they received from their teachers. I learned how to be a creative, motivational teacher from these first students of mine.  I’ve carried that teaching/coaching style with me for 40 years, refining it along the way.  I’ve taught/coached from kindergarten age through high school – young adults through masters, and found that my ‘motivational’ style works for everyone.

CK: Do you know if women need more of the mental/emotional training than men do? Or is it that women accept it better than men, perhaps for environmental/societal reasons? Do you feel men may need this sort of training more than we are currently aware?

MJ: I think both men and women can equally find value in mental/emotional training, but women definitely accept it more readily than men.  I think that’s a true statement for our society in general.  Men are hesitant about getting involved in anything that might be termed ‘touchy-feely’.  On the positive side, more male athletes are becoming aware of the value in mental/emotional training thanks to a plethora of books written by athletes and coaches from all sports.  On the negative side, I don’t find many coaches that are comfortable in incorporating mental/emotional training into their program.  It’s so much easier to ignore those aspects or send the athlete to a sports psychologist to deal with it.  I feel it’s so important to work on mental/emotional strengthening when the athlete is young, so that coping mechanisms develop gradually and problems don’t become deep rooted issues that need professional help when the athlete is feeling the most pressure in his/her productive years.

CK: Apparently you took up recreational running when you moved to Oregon and from there began to coach at the elementary school level, then moved on to high school before Maria Mutola showed up and the rest, as they say, is history. Which athletes and coaches that you studied the training of meant the most to you and helped to form your approach?

MJ: I had been recreational running – doing well in age group 5/10K – since 1974 when I lived on a 10 acre farm in Rogue River, Oregon. When I moved to Eugene in 1981, I caught the running fever – Pre had recently died and Nike was beginning to be popular.  My first job was at a middle school (6th-8th grade) and I was asked to be the cross country and track coach.  That first year, I immersed myself in books and classes at the university to learn everything I could.  Bill Dellinger was one of my teachers and had a great influence on my coaching career.  I learned from all the master coaches, but the one book that had the most influence on me was Training Distance Runners by David Martin and  Peter Coe, Seb’s father.  It is an incredible book. Adding to my knowledge, I read a book called The Mental Athlete by Dr. Kay Porter, a sports psychologist here in Eugene.  The mental aspect that she focuses on really spoke to me.

CK: As a child studying dance and piano, did you then growing up in New York have the opportunity to run at school, at all? Or was your first exposure to running in Oregon as a school teacher?

MJ: Girls did not participate in sports, and nobody thought of running as enjoyable. Girls were cheerleaders for the sports boys participated in, and I was not interested in that.  Title IX which brought equality to women’s sports did not pass until I was out of college.  There was no awareness in the 1950’s-60’s that sports was an option for girls – at least not in my world.  My body thrived on the exercise that dance provided and I have carried that passion with me through the years.  Besides running, I take dance classes 5 days a week and am in a dance troupe that gives performances.

CK: What genre of dance do you practice and perform?

MJ: I take ballet lessons twice a week.  The other dance class I participate in experiments with different genres.  We do jazz, modern, spanish – this month we’re working on a hip-hop routine.

CK: Was being a member of the Panhellenic Council in Miami an early influence to you in regards to your later use of mental and emotional athletic training?

MJ: Being the President of the Panhellenic Council filled my days. Between my academics and my responsibilities as council president, there was little time for a typical college social life. I had a wonderful mentor – Dean May A. Brunson – who took me under her wing. My experiences definitely strengthened my emotional control. I became more confident, courageous, positive, honest and organized. And yes, mentally I was introduced to making goals, buffering them with positive affirmations, learning how to relax under pressure and seeing the enormous powers of visualization.  I also learned during that time to take care of details and to surround myself with co-workers I could trust..

CK: How did the honesty you refer to manifest itself?

MJ: And the honesty you asked about was manifested both with myself and with others. I entered college at age 16 and graduated at age 20. I was away from home and family and very young, very naive. The world was changing so quickly in the 1960’s – JFK was killed, the Vietnam war was happening, the feminist movement, the civil rights movement (MLK killed). The Panhellenic Council and Dean Brunson helped to ground me by focusing on positive achievements.

CK: So a great  experience?

MJ: Panhellenic was a wonderful experience that matured me early on (I was 19/20 when I graduated college). Those valuable skills and strengths have been incorporated into my teaching and coaching professions throughout the past 45 years.

MJ: I agree that strength in the ankle is the key to fewer injuries around the calf/achilles/foot. Ankle strength also results in more efficient foot plant and toe off.  I can remember as a young ballerina – my most exciting moment was when my Russian ballet teacher told me my ankles were strong enough to put me ‘en pointe’.  I had my toe shoes picked out for years just waiting for her decision.  I was 11 years old.  The power of the ankle !!!